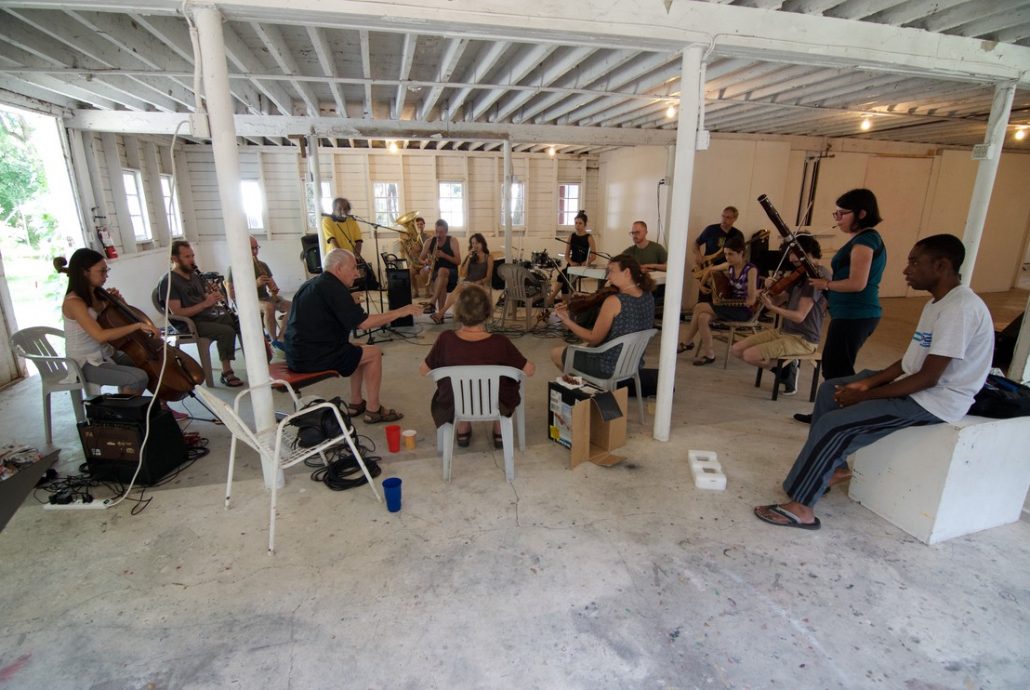 Art Omi: Music invites ten to twelve musicians and composers from around the globe to come together for two and a half weeks each summer for a uniquely collaborative music making residency.

Art Omi: Music encourages its participants to share ideas, perform each other’s works, and write music for one another, while exploring their own musical vision and broadening their artistic and cultural horizons.

Informal concerts invite the public to experience the creative process, collaboration and development of the residents.

Art Omi: Music welcomes composers and sound-makers working in all genres and from all backgrounds from all over the world. Because Art Omi: Music encourages and fosters participation in new collaborative environments, only applications from individual applicants are accepted.

Art Omi residency programs offer artists the vital opportunity of space and time to create both individually and with one another. Lodging, meals and studio space on Omi’s beautiful 200-acre campus in the Hudson Valley are provided at no cost to the residents.

Art Omi is located two and a half hours north of New York City in the historic Hudson River Valley's Columbia County. Named for a neighboring village, the hamlet of Omi is close to the small town of Ghent, NY, as well as Albany, Chatham, and Hudson, NY, which offers train connections less than thirty minutes away (we provide transportation to and from the Hudson, NY train station).

The facilities, situated on three hundred acres of open land, include the Sculpture & Architecture Park, Benenson Center and Newmark Gallery, a large two-story barn, and other farm structures with spaces for rehearsing, plus contemporary residence buildings designed with a vernacular reference to local barns, all surrounded by abundant perennial beds and expansive lawns dotted with fruit trees.

A Federal Period farm house serves as a gathering center for residents, providing a full kitchen, library and laundry facilities. The front porch overlooks rolling hills and the majestic outline of the Catskill Range. A swimming pool, bicycles, WiFi access and several computers are available on the premises. Lunch and dinner are served daily for communal meals, and a fully stocked kitchen provides plentiful food for breakfasts and snacks.

Columbia County, and the nearby Berkshire Mountains, are popular destinations because of their historical, natural and cultural riches. From bird sanctuaries to summer performance festivals, presidential mansions to farmer's markets, the environs offer a singular blend of rural quiet and cultural stimulation. Staff and friends in the neighborhood are often available for excursions of interest to residents.

Jeffrey Lependorf received a doctorate in music composition from Columbia University and an undergraduate degree from Oberlin Conservatory. His teachers include Richard Hoffmann, Fred Lerdahl, Jack Beeson, Chou Wen-chung and Mario Davidovsky. A composer of operas and chamber music, he is also a certified master of the traditional Japanese shakuhachi flute. His music has been performed around the globe—literally: a recording of his ""Night Pond"" for solo shakuhachi launched into space when the shuttle Atlantis took off on May 15, 1997 and remained for a year aboard the Russian space station Mir. He began shakuhachi study with Kinko master of shakuhachi Yoshinobu Taniguchi, who gave him the venerable name ""Koku"" (""empty nothingness""), and studied subsequently with Ronnie Nyogetsu Seldin and Ralph Samuelson. He has performed or been performed across the United States, Europe and in Japan. Recordings can be found on iTunes and Amazon.com. www.jeffreylependorf.com