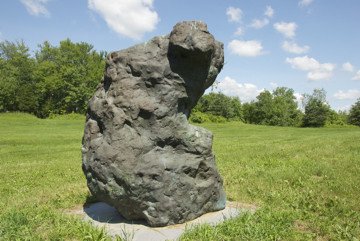 William Tucker is a distinguished sculptor who, having made constructions in steel, wood and other materials for the first twenty years of his career, now models in clay and plaster for bronze. Asked to describe his work, Dore Ashton commented that Tucker has found "original ways to extend the great modern tradition in sculpture."

Prior to his work being exhibited for this annual summer exhibition, in April 2011 Dore Ashton (an eminent writer and critic) and Tucker engaged in a presented talk at Omi which was open to the public. The two are close friends, as Ashton had met Tucker early in his career and had written about his work over the course of their long friendship.

Born in Cairo in 1935, Tucker moved to England as a young child. He attended the University of Oxford from 1955 to 1958 and continued postgraduate study at the Central School of Art, and Saint Martins College of Art in London, where Anthony Caro was teaching. His work came to public prominence in 1965 when it was exhibited in The New Generation exhibition at the Whitechapel Art Gallery in London. The following year he exhibited alongside Caro in the important 1966 exhibition, Primary Structures, at the Jewish Museum in New York. Tucker was Gregory Fellow at the Fine Arts Department of the University of Leeds for two years from 1968 to 1970, and represented Britain at the 1972 Venice Biennale. In 1978 Tucker moved to New York, where he taught at Columbia University and the New York Studio School. He received a Guggenheim Fellowship in 1981, the National Endowment for the Arts Fellowship in 1986, and in 2010, the International Sculpture Center's award for Lifetime Achievement in Contemporary Sculpture.