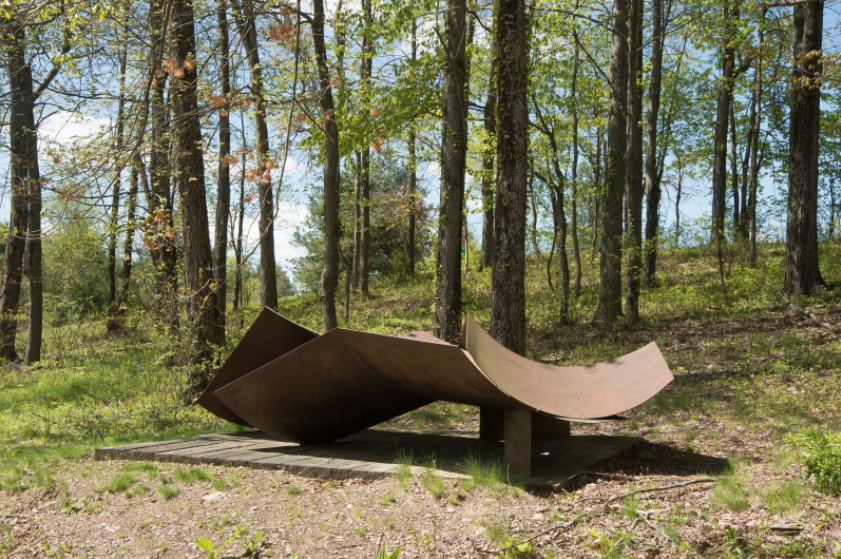 John Deere is a prime example of earlier works by Boepple, which different from his more recent geometric and linear large-scale sculptures. He became inspired by the minimalist artists of the 60s and 70s, and his influence from artist Isaac Witkin is obvious with this piece as these large scalloped forms blankets the ground. These spread out sheets of steel are large, low & curved, and are affixed to a wooden base which occupies the ground area in an expansive way.

Willard Boepple has said that he prefers to create larger-scale sculptures so that the public can see them and immerse themselves fully. His smaller pieces, he claims, are created simply to be "shown around" as a way to translate his larger works to fit indoors. Boepple's primary media are wood and metal, and his forms are typically linear and geometric in style. He uses minimal color, if any, which reflects his overall style of being inspired by the Minimalist movement which includes artists like David Smith and Sir Anthony Caro.

Willard Boepple is an American artist born in 1945. He attended UC Berkeley from 1963-1964, the Skowhegan School of Painting and Sculpture in 1963, and received his BFA from the City College of The City University of New York in 1968. He was a faculty member at the School of The Museum of Fine Arts in Boston from 1977-1987. His work is featured in numerous collections such as the Metropolitan Museum of Art in NYC, The National Gallery of Botswana in Gaborone, Storm King Art Center in Mountainville, NY, and many more. He has exhibited extensively throughout the world in institutions such as The National Gallery of Kenya, Woltjen Udell Gallery in Alberta, Broadbent Gallery in London, Tricia Collins Contemporary Art in New York, Lori Bookstein Fine Art in New York, and many many more.