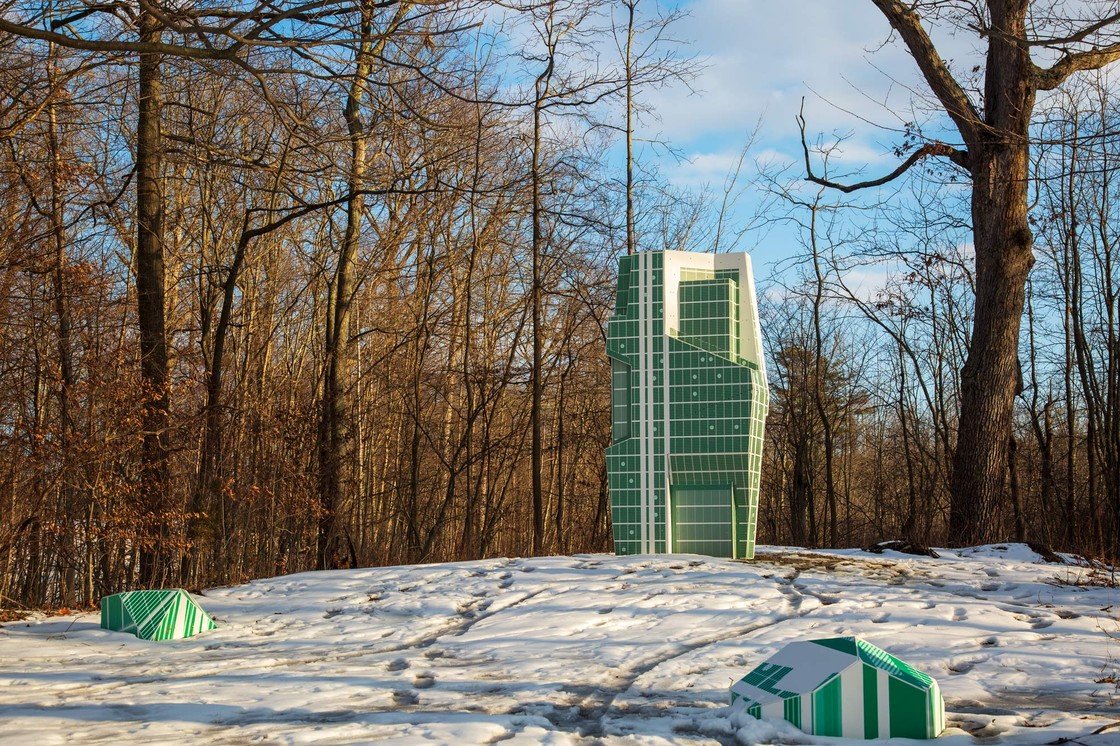 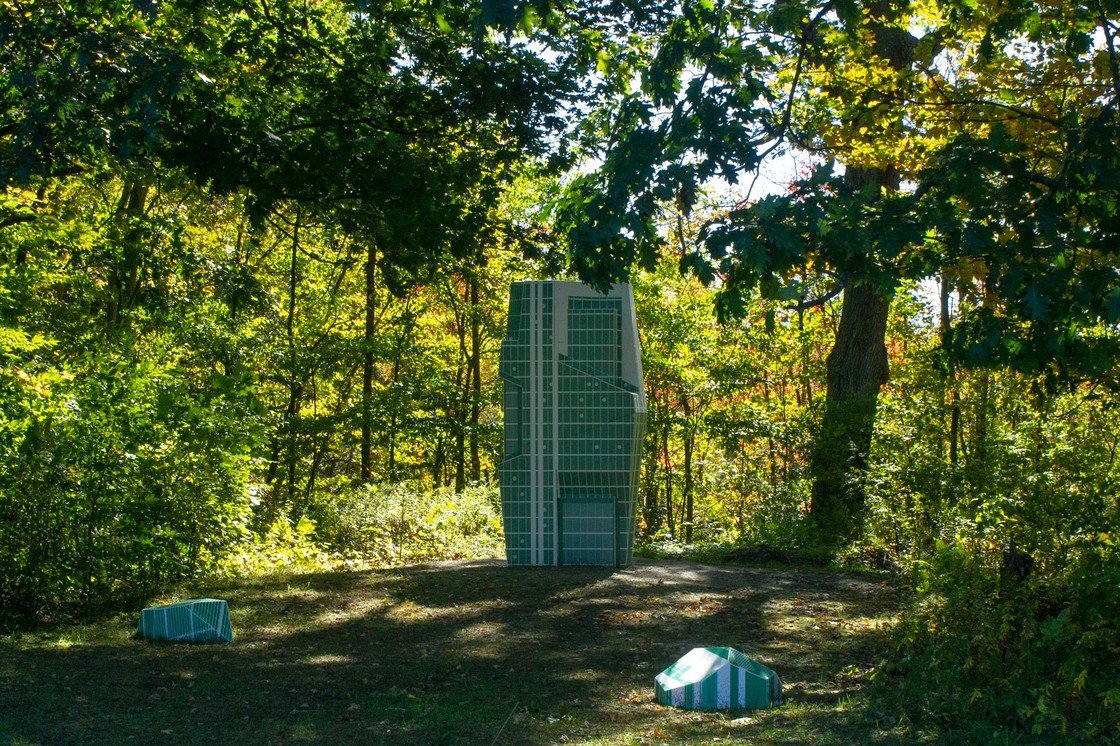 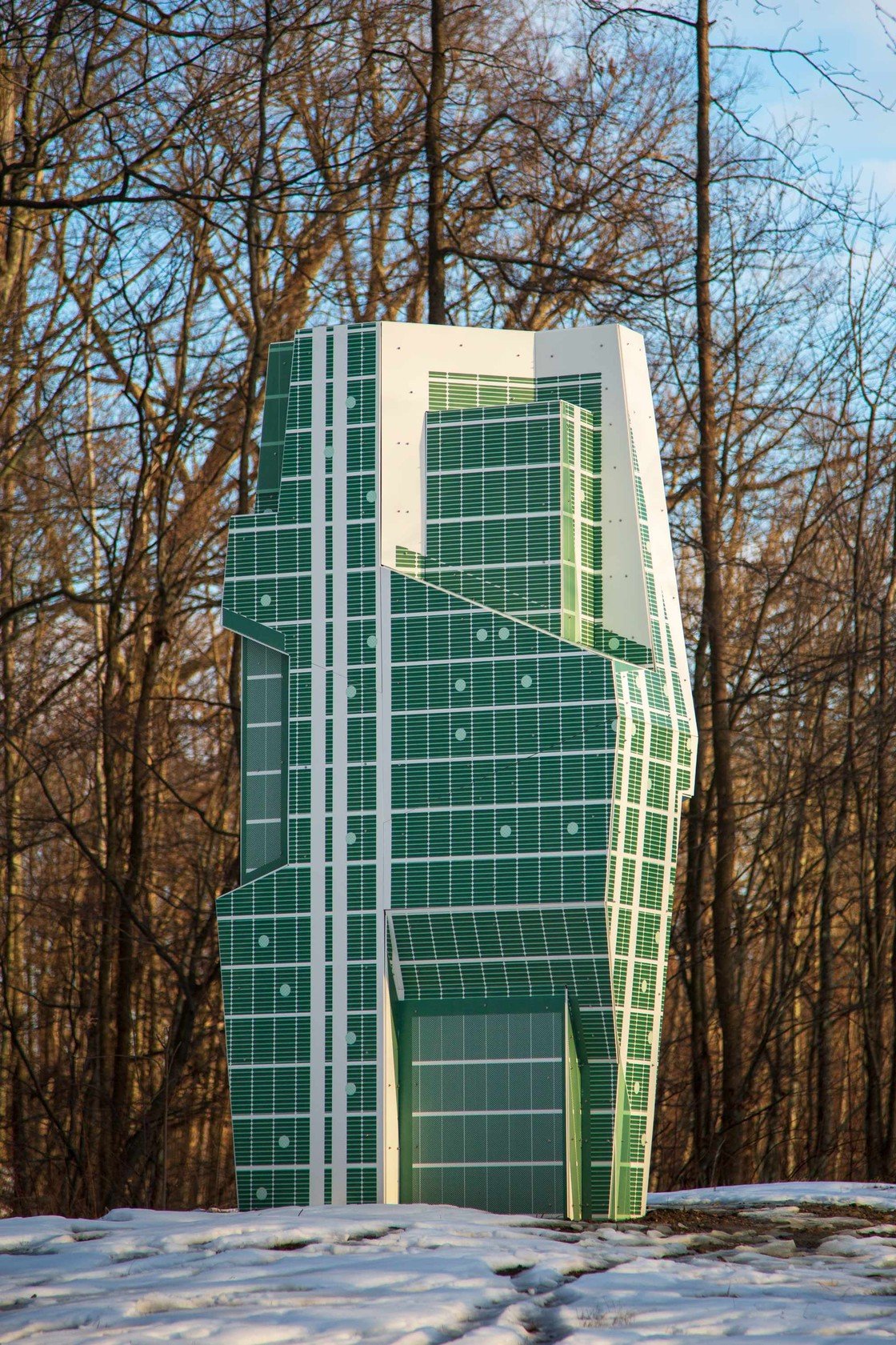 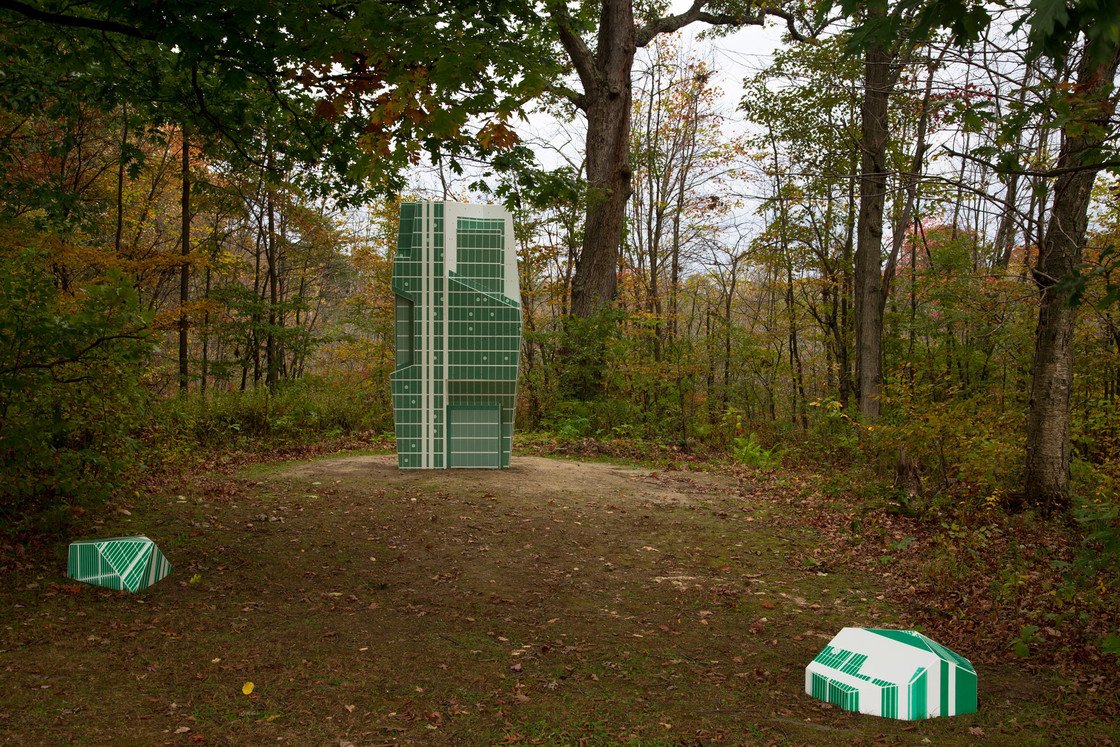 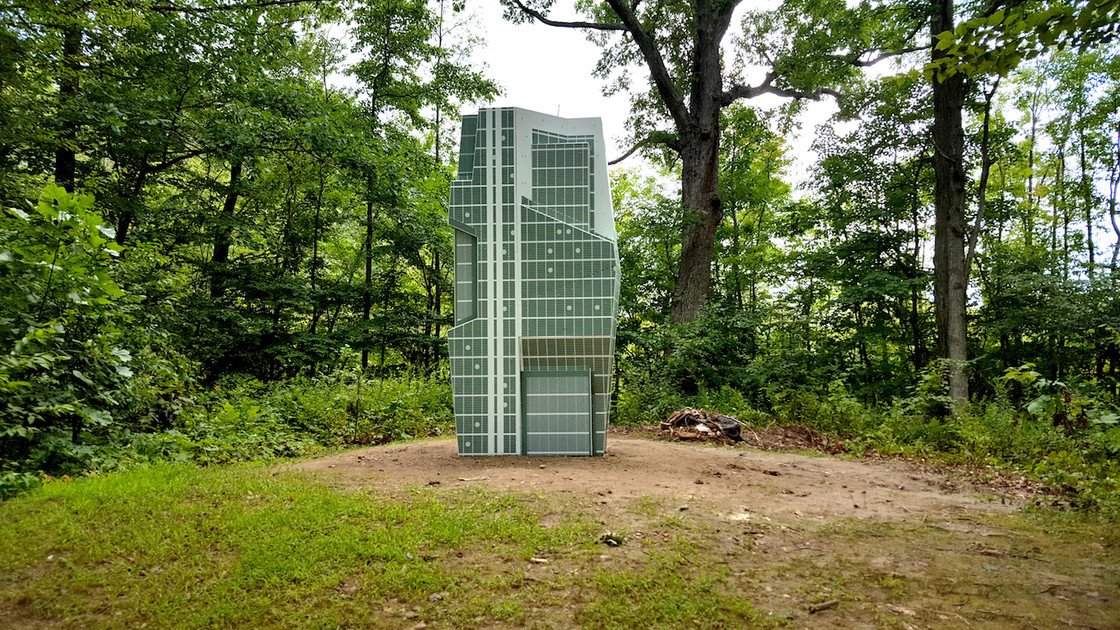 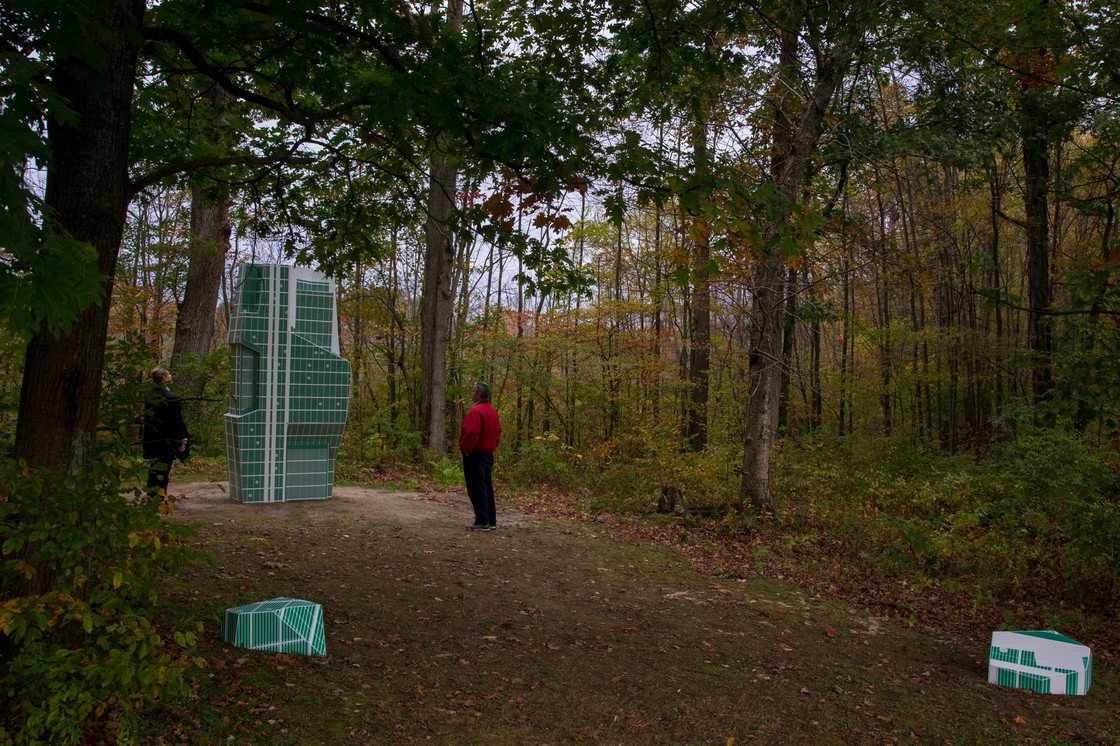 Transfers is a large, vertically oriented, proto-architectural sculptural installation. This will be the second iteration of the project, which was first installed in downtown Los Angeles at the A+D Museum from March through May 2018. In this second iteration installed at Art Omi: Architecture, Transfers has been be stripped down to its aluminum scaffolding, and re-clad with a set of custom CNC-cut Dupont Corian solid surface panels. Each panel has been printed with an abstracted image responding to the Art Omi: Architecture curated “Shelters” theme, and the concept of vertical and sculpturally formed dwellings using a modern material.

The geometric concept for Transfers is geological in origin. The piece takes inspiration from the aggregation systems developed by sculptor Tony Smith (rooted in his research on crystallography), and the earth artist Michael Heizer’s artificially constructed rock-pile installations such as Dragged Mass Geometric (Whitney Museum of Art, 1985). Like Smith’s and Heizer’s works, Transfers asserts its artificial, constructed nature (exposed joints and hardware), but its form references primal crystalline configurations like those theorized by geologists at the turn of the century. As an artificial object-in-the-landscape, Transfers reads as a small monument or obelisk (in the lineage of Minimalist and Post-Minimal sculpture), but also as an abstract prototype for an urban tower.

The graphic component of Transfers was conceived as an experiment in new urban typologies that use the tower-envelope as a site for optical research. The Corian panels cladding Transfers are flatbed-printed (using commercial sign printing technology) with an image resembling a building-envelope that one might find in the skyline of a major metropolitan urban landscape. Our diagrammatic graphic design reads as both tower-envelope (with notations that reference modern curtain wall technology) and as a painterly datum that shares the spatial properties of Modernist grids in works by figures such as Agnes Martin. The graphic map designed for Transfers aspires to create an ambiguous space between the Modernist grid (infinite, expansive, transcendental, classical) and the stubbornly material relief of an urban-scaled architectural facade.

Viola Ago is an architectural designer, educator, and practitioner. She is currently serving as the Christos Yessios Visiting Professor at the Ohio State University’s Knowlton School of Architecture and as a lecturer at the Graduate School of Design at Harvard University. She was the 2016-2017 William Muschenheim Design Fellow at the Taubman College of Architecture and Urban Planning, University of Michigan. Viola earned her Master of Architecture degree from the Southern California Institute of Architecture in Los Angeles, and a Bachelor of Architectural Science from Ryerson University in Toronto. She has previously taught at Taubman College and the Southern California Institute of Architecture in the graduate and undergraduate programs. Prior to joining Taubman in 2016, she worked as a lead designer in the Advanced Technology Team at Morphosis Architects and was involved in international design and construction projects. Viola is currently a member of the Scientific Committee for the 2018 ACADIA Conference and has been featured and exhibited in multiple publications and venues across the United States and Europe.

Hans Tursack is a designer and artist from Philadelphia, Pennsylvania. He received a BFA in studio art from the Cooper Union School of Art, and an M.Arch from the Princeton University School of Architecture where he was the recipient of the Underwood Thesis Prize. He recently received the Willard A. Oberdick teaching/design fellowship from the University of Michigan’s Taubman College of Architecture and a MacDowell Colony Fellowship.. Before coming to Michigan, Hans worked in the offices of LEVENBETTS Architects, SAA/Stan Allen Architecture, and Tod Williams Billie Tsien Architects. His writing and scholarly work have appeared in Pidgin Magazine, Thresholds Journal, Log Journal, Dimensions Journal, Archinect, and the Architects Newspaper. His visual work has been exhibited in New York, Chicago, and Los Angeles.This fall he will serve as the 2018-2019 Pietro Belluschi Research Fellow at the MIT School of Architecture + Planning.

Viola Ago and Hans Tursack were provided support by the University of Michigan, the Taubman College of Architecture and Urban Planning, Alro Steel, Dupont Corian Solid Surface, The 3M Company and Brilliant Graphics to create this project, now on view at Art Omi.