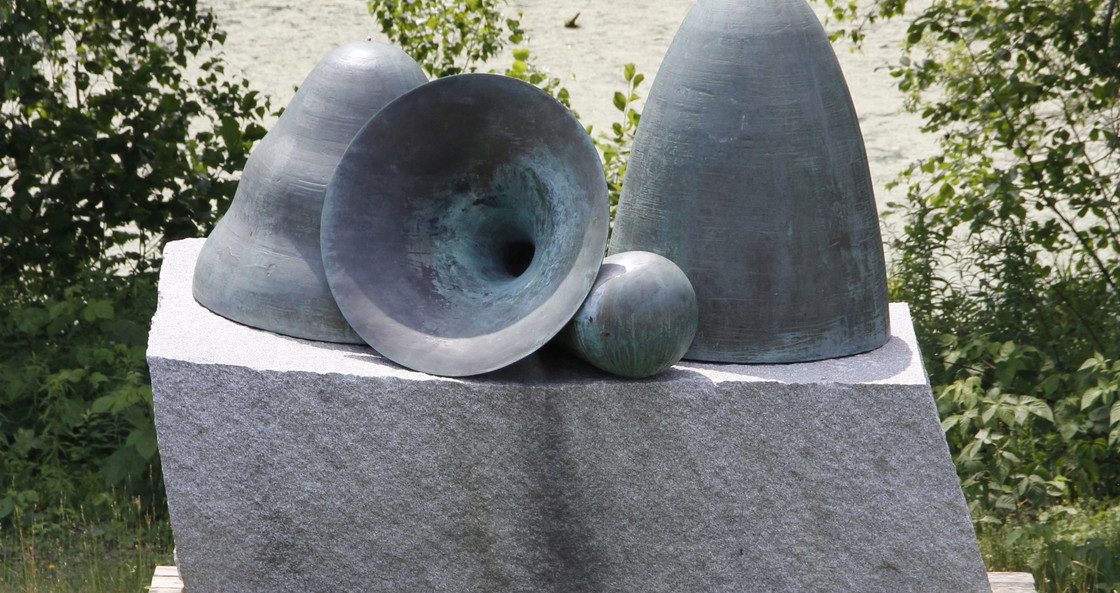 Tony Cragg is one of Britain's foremost sculptors, who constantly pushes the boundaries between people and the material world. He works with stone, wood, found objects, aluminum, cast bronze and iron. The forms of his work range from repetitive stacks to witty floor arrangements of objects that he began making in the 80s. He was originally trained as a scientist and worked as a lab technician, which is reflected in his vigorous approach to material use.

This piece contains several cast bronze components on a marble base. These forms are ambiguous and can be referenced to naturally occurring shapes, vessels, or man-made objects. The precariousness of this leaning marble base with these heavy, bell-shaped forms that sit on top create a memorable moment in time for the viewer as they sit beside Art Omi's pond.

Tony Cragg was born in Liverpool, UK in 1949 and has lived and worked in Wuppertal, Germany since 1977. He has a BA from Wimbledon School of Art and an MA from the Royal College of Art. Among many major solo shows he has exhibited at CAFA Museum, the Scottish National Gallery, Tate Gallery Liverpool, Museo Nacional Centro de Arte, Reina Sofia, Stedelijk van Abbemuseum, and Tate Gallery, London. He represented Britain at the 53rd Venice Biennale in 1988 and in the same year was awarded the Turner Prize at the Tate Gallery, London. He has been a Professor at Ecole Nationale Superieure des Beaux Arts, Paris and Professor at Kunstakademie, Dusseldorf. He was made a CBE in 2003, elected a Royal Academician in 1994; received the Praemium Imperiale for Sculpture, and he was Awarded the 1st Class Order of Merit of the Federal Republic of Germany.