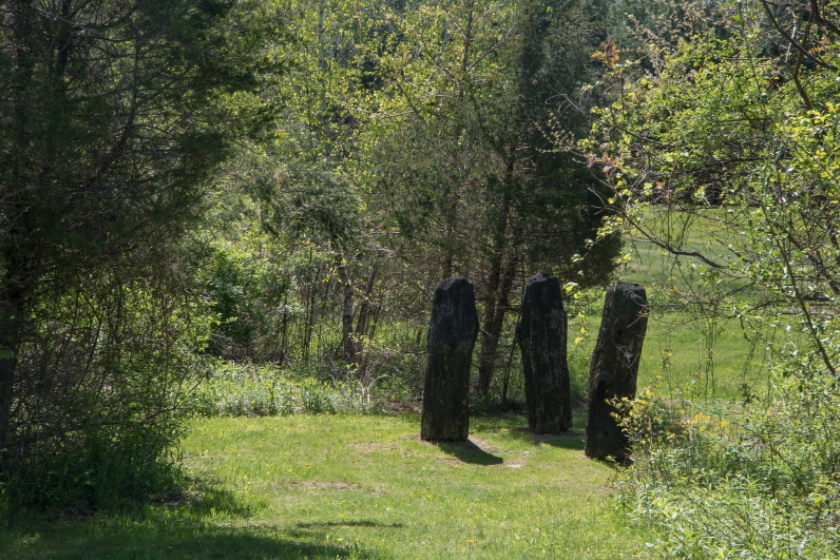 Thomas Matsuda's work and process stems from a background of American upbringing, Japanese apprenticeship, and Native American influence. Through his sculptures, Matsuda seeks to create a synthesis between East and West by evoking mysterious spirits and energy and by harnessing his own self in his work. Inspired by Native American spirituality, Matsuda identifies with their respect for the planet and seeks to honor that connection from start to finish. Matsuda walked across America for six months, and then spent six months in Arizona with the Dine (Navajo).

All of the materials for his work are obtained from riverbeds and mountain forests- connecting his work to the earth and the collection of supplies to his art form. His sculptural work is often a two-part installation of wood followed by a fire ritual. Matsuda approaches his work in the way that Koukei Eri, a former mentor, describes: "In the West, sculpture, like most forms of art, is viewed as a medium of artistic self-expression. By fixing his name to his works, the artist seeks to manifest his individuality – as well as to seek eternal recognition. With Buddhist sculpture, however . . . what is important, is for the artist to devote himself wholeheartedly to his task in an attitude of benevolence. That's why you will find no signature or seal on a Buddhist image."

Matsuda began studying formally at Pratt Institute as a lithographic printer in 1976, and then got his MFA in sculpture at the University of Massachusetts. Matsuda teaches drawing, design and sculpture at Mount Wachusett, and teaches at the College of New Rochelle Graduate School in New Rochelle, NY. Previously, he taught for several years at Pratt Institute. Between 1984 and 1997, he has commissioned over two hundred sculptures in Japan for temples, shrines, villages, businesses, and individual patrons. He has had over 25 solo exhibitions in his career, and has shown in even more group exhibitions from 1986-2014. His work belongs in several collections such as the Abington Sculpture Park in Jenkintown, PA, the New York Buddhist Temple in NYC, Smith College in Northampton, MA, and many more. He has been awarded many grants, such as the Ford Foundation Grant, the US Embassy Grant, and the Japan Foundation to name a few. Many of his works exist in public outdoor installations world-wide. tmatsuda.com