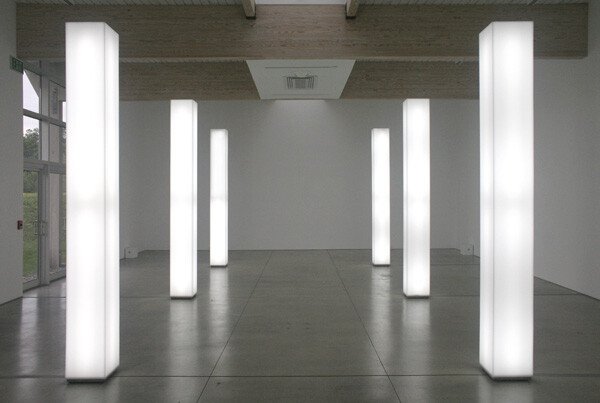 Born in 1957 in Cologne, Germany, Simon Ungers was the son of accomplished architect Oswald Mathias Ungers. He moved to the United States in 1968, and he studied architecture from 1975 to 1980 at Cornell University. Throughout his career, Ungers was unique in his ability to bind the two disciplines of architecture and fine art. He maintained his architectural practice and artist studios in both New York and Cologne. His interest in light and form has resulted in the creation of a multitude of light-based sculptures. These six self-standing light structures were on view at the Charles B. Benenson Visitors Center and Gallery.

During his life, Ungers received critical acclaim for his T-House in Wilton, New York and the Cube House in Ithaca, New York. He won many architectural competitions including first prize for the Memorial to the Murdered Jews of Europe in Berlin, Germany, but his design was not realized. His artistic practice referenced his background in architecture. Ungers' work has been exhibited in such institutions as SFMOMA, San Francisco, CA; MoMA, New York, NY; Palazzo Pitti, Florence, Italy; Deutsches Architekturmuseum, Frankfurt, Germany; and the Whitney Museum of Art, New York, NY. Ungers died on March 6, 2006. His work continues to be exhibited world-wide.