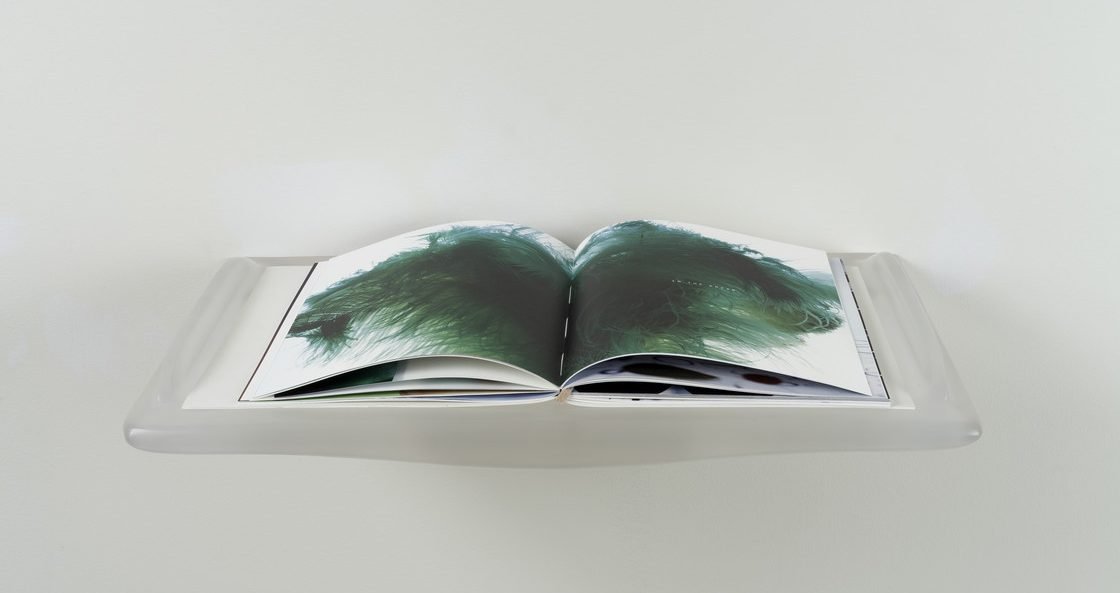 Lucid Green, 2013, is a 100 page, neoprene wrapped, deluxe artist's book, housed in a wall mounted cast acrylic case, published by Carolina Nitsch, New York. The book relies equally on image, typography and word to create a poetic place in which the reader is invited to enter through the various means the book offers as a portal. Every aspect of the book offers carefully nuanced details of the experience of Lucid Green; a nature sanctuary set in an unknown time in the future. That future is a type of space and time that is different than the one we are in. The book's main character Jill Poet is from another planet named Thear, who has come to Earth after an event called The Disappearance. The book brings the reader to an expression of ambiguity and surrender while feeling deep love, as a visitor, for a dying planet.

Cabinet of Currency, 2010 is a cast acrylic wall mounted sculpture with a unique set of 'power objects' within. The contents or 'power objects' have a relationship to the over decade-long story of 'Jill Poet' that Hayes has been writing and working from as source of inspiration and poetic focus. The cabinet is a collection of objects, both created, found and gifted to the artist, that are representative of the observations of Jill Poet, a visitor to earth from another planet, that speak to the conflicts inherent in our sense of currency of exchange.

Paula Hayes (born 1958 in Concord, Massachusetts) is an American visual artist and designer who works with sculpture, drawing, installation art, botany, and landscape design. Hayes has lived and worked in New York City for over two decades and is known for her terrariums and other living artworks, as well as her large-scale public and private landscapes. A major theme in Hayes' work is the connection of people to the natural environment, and much of her work is concerned with the care that is required to grow and maintain large- and small-scale ecosystems. Hayes piece Trees for ETs is also on view in The Fields Sculpture Park. A new work, Gazing Globes, will be on view at Madison Square Park, NYC, February 2015.