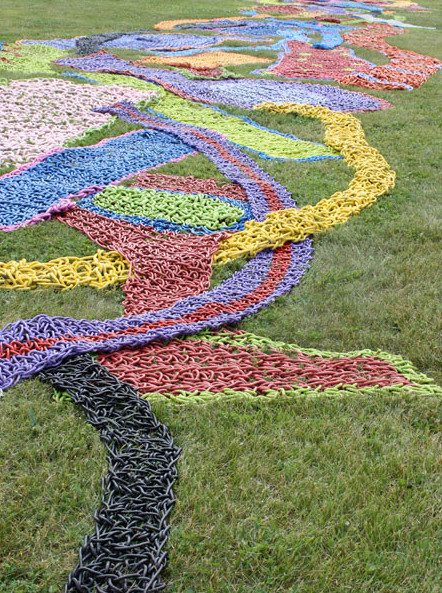 Orly Genger constructs overwhelming sculptures and forms that take over the space in which they occupy by knitting, knotting, and crocheting - all by hand. Intent on engaging her viewers both physically and psychologically, this huge installation outside our Charles B. Benenson Visitors Center encompasses the entire space as grass comes through the colorful painted rope, and flexes into the gentle crevasses that exist within the landscape. The malleability of the rope lends itself to Genger's labor-intensive process; its' existence outdoors presents the material with both the rigidity of metal and the soft undulation of yarn, reminiscent of chainmail. Genger merges traditional craft practices with fine art sensibilities of post-Minimalist sculpture, and her installations truly exist as several parts that make a whole.

Orly Genger (American, born 1979 in New York City, New York) currently lives in New York City and works in Brooklyn, NY. She received her BA from Brown University in 2001 and attended the School of the Art Institute of Chicago in 2002. Genger's recent solo exhibitions include Red, Yellow and Blue at Madison Square Park in New York City (2013), Big, Open, Empty at Larissa Goldston Gallery, New York City (2011), and Whole* at the Indianapolis Museum of Art (2008). Her work has also been included in numerous group exhibitions at various venues throughout the United States, including MASS MoCA, North Adams, MA (2010), and the Museum of Contemporary Art, Denver (2010).