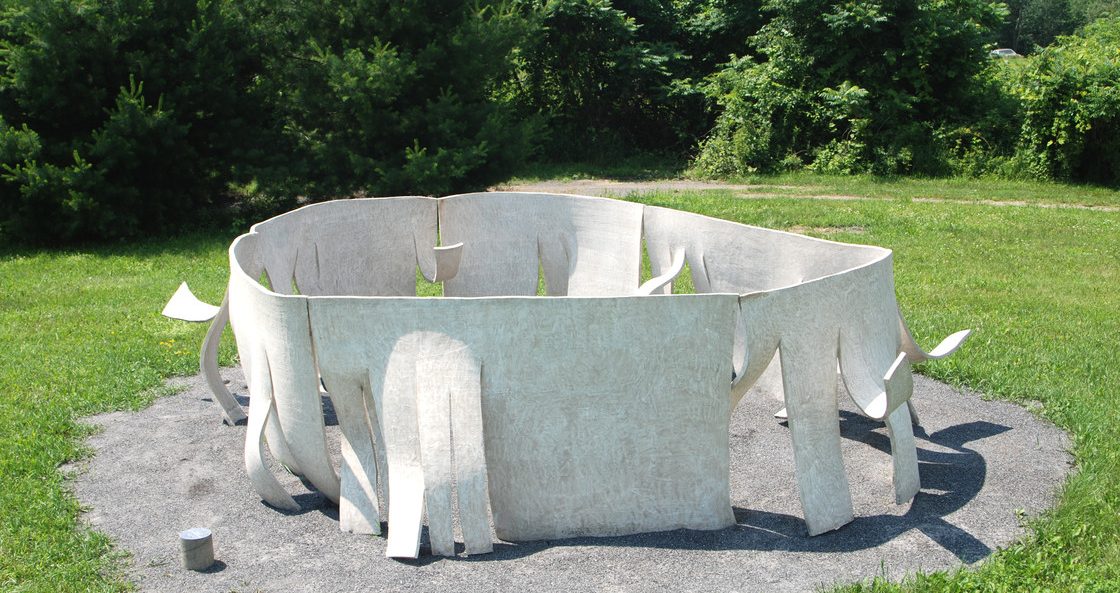 Sculptures by Mia Westerlund Roosen rely on material, texture and form. She is extremely aware of surface qualities and weight, and her experience with a multitude of media provides her with ample opportunity to play with these sensibilities. Her past works in the 1970s - 80s were made of materials such as lead, concrete, copper, and asphalt. Subsequently, her works became larger and lighter as she fabricated steel tables and began using resin, ceramics, cotton, felt and the earth to create larger forms that occupy a space. She often implements the technique of using multiples to create a larger form, whether it occupies an entire room or an area outdoors.

Bolero is a fine example of her focus on material and form, as this resin-saturated felt sculpture seems to dance and blow in the wind despite it being hard as stone. It looks as if it's made of concrete, which would be an arduous task considering the curves, bends, folds and balancing of this structure. The material itself lends to the concept of the appearance of weightlessness and provides a sort of illusory experience when you realize all is not what it may seem.

Mia Westerlund Roosen's work has been extensively exhibited, published and collected. She has participated in solo exhibitions in institutions throughout the United States and Canada since the 1970s including Leo Castelli Gallery (New York, NY), Storm King Art Center (Mountainville, NY), Jared Sable Gallery (Toronto, ON), and many more. She has participated in a multitude of group shows in galleries and institutions including the Weatherspoon Art Gallery (Greensboro, NC), Santa Barbara Museum of Art (Santa Barbara, CA), and many more. Her works are included in public and private collections the Modern Museum of Art (New York, NY), Neuberger Museum (Purchase, NY), Western Gallery (Bellingham, WA) and more. Westerlund Roosen has been awarded awards and grants including a National Endowment for the Arts grant from 1988-89, and a Fulbright Fellowship. She lives and works in New York, NY and Buskirk, NY.