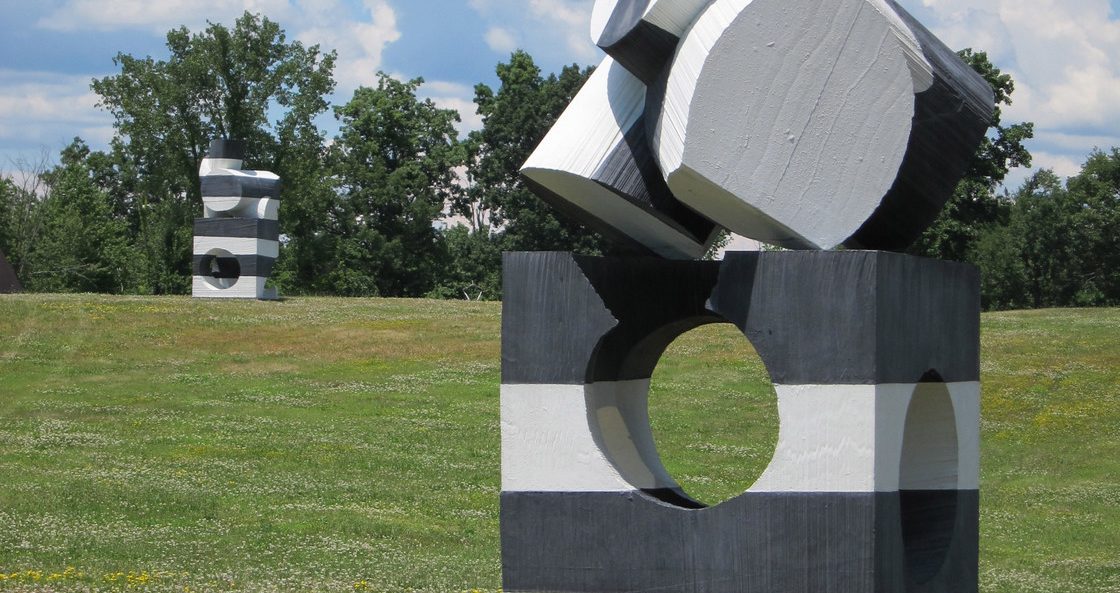 One piece remains on site following an exhibition of four jacks by Mel Kendrick.

At once imposing and playful, four massive sculptures by Mel Kendrick recently dominated The Fields, one of the sprawling meadows at Omi International Arts Center, near the town of Hudson in upstate New York. The works energized the landscape as they merged with it.

Although sited quite a distance apart, the components of this lively quartet harmonized with one another in terms of formal qualities as well as temperament. Part of Kendrick’s 2011 series, jacks, the sculptures feature two blocky forms, one atop the other. Made of cast concrete with wide, even bands of black and white, each work is approximately ten feet tall and weighs some seven tons. These bold, architectonic pieces were first shown indoors—at New York’s Mary Boone Gallery, in 2011—where they elicited a relatively intimate and personal engagement with the viewer, like commanding personages. In an outdoor setting, the sculptures suggest a broader range of metaphors. They appear, perhaps contradictorily, both animated and elegiac—like a chain-gang fugitive in old prison garb, or a monolithic tombstone, a monument to some lost civilization.

Known for process-oriented works, especially ordering systems and networks of forms that result in totemic sculptures, usually in wood, Kendrick here transposed his experiments to more unorthodox materials. He used hot-wire techniques to carve large chunks of Styrofoam. In the jacks, the cylindrical cut-out sections removed from the blocks indeed resemble the shapes of pieces used in the children’s game of Jacks. Molds were made for each section and filled with alternating black and white layers of concrete. The textural nuances of the hot-wire cuts remain in the final work, assuming the look and texture of wood grain.

In each composition the extracted component rests atop the now-perforated base block. And like the pieces in a game of jacks, the upper section of each work appears to have landed on three points, while three intersecting tubes traverse the interior of the lower section. Light and air could now penetrate the lower portion and envelop the upper segment, allowing for a more complete integration with the surroundings, profoundly effective in an outdoor, nature setting.

The concrete’s elegant striations allude to architecture, particularly the black-and-white marble facades and interior columns of early Renaissance buildings in Florence, and especially the Sienna Cathedral—which Kendrick acknowledges as a major inspiration. The sculptures also reference the “razzle dazzle” painting techniques occasionally used to camouflage battleships during World Wars I and II.

An earlier and related series by Kendrick, Markers, 2009, shown outdoors at Madison Square Park in New York, had a similarly monumental bearing. It is telling that the artist titled the very first work in the series Study for a Monument, 2009. With all of these recent works, Kendrick calls into question the notion of monumentality that is so integral to public sculpture. It is interesting to reconsider the arguments concerning monumentality put forth by the critic Rosalind Krauss in her landmark essay Sculpture in the Expanded Field [October, Vol. 8, Spring 1979, pp. 30-44].

“The logic of sculpture, it would seem, is inseparable from the logic of the monument. By virtue of this logic a sculpture is a commemorative representation. It sits in a particular place and speaks in a symbolic tongue about the meaning or use of that place,” Krauss asserts. Eventually, in the 20th Century, the logic of the monument shifted. It entered “the space of what could be called its negative condition—a kind of sitelessness, or homelessness, an absolute loss of place,” Krauss states. Extreme examples of this condition might be seen in the outlandish—and now abandoned—modernist monuments of the Soviet era, especially those scattered throughout the former Yugoslavia, which have long intrigued Kendrick.

According to Krauss, “It is the modernist period of sculptural production that operates in relation to this loss of site, producing the monument as abstraction, the monument as pure marker or base, functionally placeless and largely self-referential.” Brancusi’s Endless Column (1938) would be a prime example of this condition—and so would Kendrick’s “jacks.” Kendrick’s work, however, is not merely self-referential. As the jacks correspond with and embrace their bucolic surroundings, they memorialize and commemorate the resplendence of nature and its ever unfolding majesty.