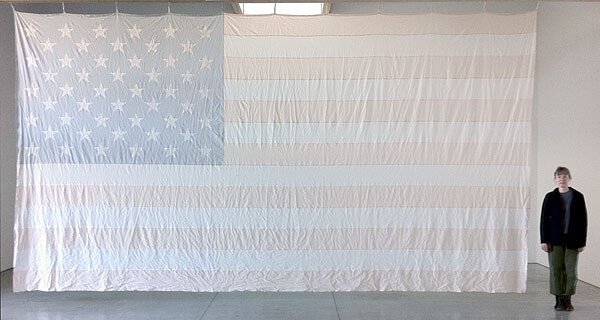 Mary Carlson is a sculptor who works in a variety of media ranging from ceramics to found objects and fabric. Carlson's work typically contains imagery of nature and animals, constructing small-scale, delicate porcelain sculptures.

This work exhibited at the Charles B. Benenson Visitors Center and Gallery is an installation of an American flag that has been altered with dye. Carlson has created a flag series in which she constructs her own versions of American flags, typically in a larger scale, and are usually installed indoors as hanging art objects.

Mary Carlson has been exhibiting her works worldwide since 1985. She was born in 1951 in Steven's Point, Wisconsin, and has received several awards including the National Endowment for the Arts in 1988 and the New York Foundation for the Arts Grant in 2007. She has exhibited in a multitude of institutions including Flipside Gallery in Brooklyn, Deste Foundation in Athens, Greece, Galerie Rudolfinum in Prague, Czech Republic, and at the Venice Biennale at Museo Correr in Venice. She has also had solo exhibitions at locations such as Holly Solomon Gallery, Bill Maynes Gallery, and Elizabeth Harris Gallery.