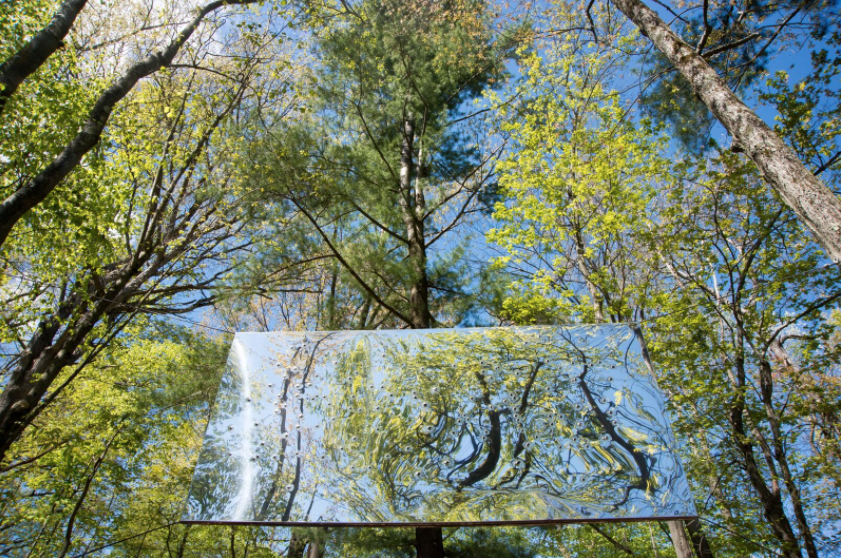 Margaret Evangeline is a contemporary artist working in sculpture, painting, and installation. She was born in 1943 in Baton Rouge, Louisiana, and eventually Evangeline's Cajun grandfather taught her the skills of the family farm from a young age. As a child she absorbed these experiences, but even then, she envisions herself forming a future as an artist in New York City. She received her MFA in Fine Arts from the University of New Orleans, which led her to New York city as she made her career in contemporary art. She pioneered the first fine arts program at Delgado Community College, and it was during this time that her interested was piqued in using unconventional and aesthetically resistant materials in her paintings, which has come to define her artistic practice. She then began her large-scale oil paintings as a response to the political turmoil reflecting the Persian Gulf War - and were the first in a long line of paintings and sculpture that Evangeline created to speak about the cultural climate of our times.

It was at the Art Omi: Artists residency in 1999 where Evangeline began her series in gunshot works. A local farmer let her borrow a rifle, and she fired a single shot through a piece of metal. This is a direct line from her life in contemporary art to the experiences of her grandfather, where shooting was a means of survival and a connection to his lineage of explorers, traders and gunsmiths. This formal element would allow Evangeline to create a stunning collection of shot-metal sculptural works and large-scale installations that provide an abstract reflection on collective memory, loss, growth and the passage of time.

Gunshot Landscape at Art Omi was her first commissioned piece, and remains part of the permanent collection of The Fields Sculpture Park. Here, she draws on the tradition of shooting road-signs in rural areas- she constructed a double-sided, mirror-polished stainless steel panel that she shot with a .22 caliber rifle. The work, which reflects the landscape, draws on the notion of place, reality, and space as a medium, as visitors are confronted by both ethereal distortions of their surroundings and focused glimpses of the material place itself within the bullet holes on the piece's mirrored surface.

Evangeline has participated in solo and group exhibitions internationally, and public installations of her work are seen throughout the world. Evangeline's work was recently featured in the solo exhibition Sabachthani, which opened in 2014 at Michigan State's new Eli and Edyth Broad Museum of Art. She began this project in 2011 as a collaboration with her son, a then lieutenant colonel stationed at a US Air Base in Balad, Iraq. Today, Evangeline continues to expand upon this process, creating large and small-scale gunshot works using materials related to American labor and culture, as well as exploring new modes of mark making in her diverse and evolving practice. She lives and works in New York City.