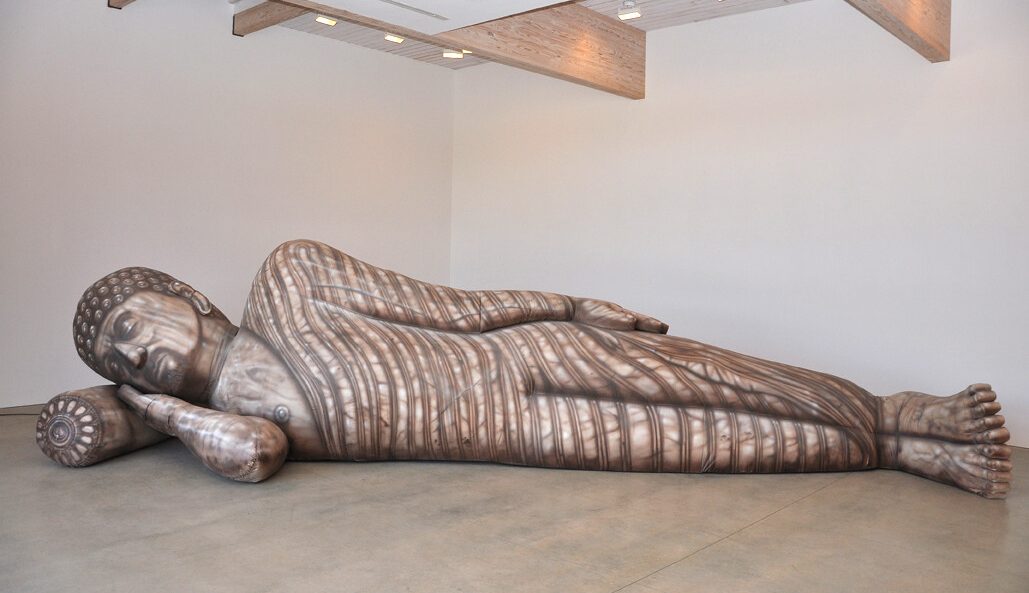 Lewis deSoto, born 1954 in San Bernardino, California is known for his installations, sculpture and public art that engages cosmological questions, notions of self, and plays with inherent phenomena. deSoto blends the conventional with the unconventional, and incorporates a variety of elements into his sculptural installations including sound, photography, slide projection, video, maps, and ice. His work is focused on ideas of archaeology, cosmology, anthropology and world religions.

Influenced by his engagement with Buddhism, deSoto created this hollow, reclined "breathing" sculpture that took up a large corner of the gallery. Affected by his fathers death, he began to contemplate his own mortality. He recalled the Paranirvana, or, "great liberation" where Buddha entered an enlightened "state of ultimate spiritual transcendence," released from the cycle of death and rebirth. He superimposed his face onto this polyethylene cloth and the surface was airbrushed. The trompe l'oiel of airbrushed fabric gives the appearance that it is made of stone, which contributes to his idea of the sculpture being large in size, yet light in weight. The motion and sound of the fan provides another conceptual element which features the mindfulness of breathing in Buddhism.

Lewis deSoto was educated at UC Riverside and Claremont Graduate University. He taught at Otis Art Institute in Los Angeles, Cornish College of the Arts in Seattle, WA., served as the Director of Graduate Studies at California College of Arts and Crafts and as is currently a Professor of Art at San Francisco State University. His work has been exhibited in Japan, Europe and the United States. His work is in the collections of the Seattle Art Museum, the Museum of Modern Art in New York and the Museum of Contemporary Art in Los Angeles as well as many private collections. He lives with his wife, Chandra Cerrito, an Oakland gallerist in Napa, California and New York City.