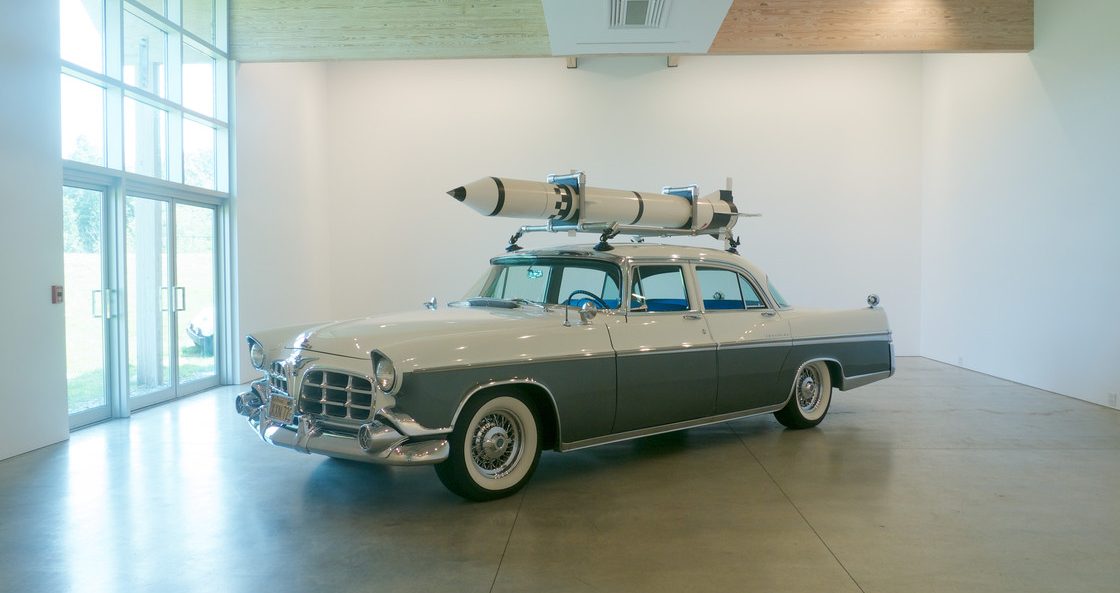 Lewis deSoto, born 1954 in San Bernardino, California is known for his installations, sculpture and public art that engages cosmological questions, notions of self, and plays with inherent phenomena.

"A 1956 Imperial is combined with a specially fabricated roof rack that holds a facsimile of a Redstone rocket/nuclear weapon from that same year. The automobile is painted white with silver accents; the missile is also designed to harmonize with the Imperial, the ultimate accessory. The interior is in Air Force blues and sumptuous with a repeating pattern of American eagles upholstery with silver/grey accents. Below the dashboard is a military style panel that arms and detonates the weapon. The car is displayed on top of a large corporate/military symbol and contained within a space consisting of rows of bulbs in industrial reflectors. This creates a pinpoints of light reflections across the car." - Lewis deSoto

deSoto was educated at UC Riverside and Claremont Graduate University. He taught at Otis Art Institute in Los Angeles, Cornish College of the Arts in Seattle, WA., served as the Director of Graduate Studies at California College of Arts and Crafts and as is currently a Professor of Art at San Francisco State University. His work has been exhibited in Japan, Europe and the United States. His work is in the collections of the Seattle Art Museum, the Museum of Modern Art in New York and the Museum of Contemporary Art in Los Angeles as well as many private collections. He lives with his wife, Chandra Cerrito, an Oakland gallerist in Napa, California and New York City.