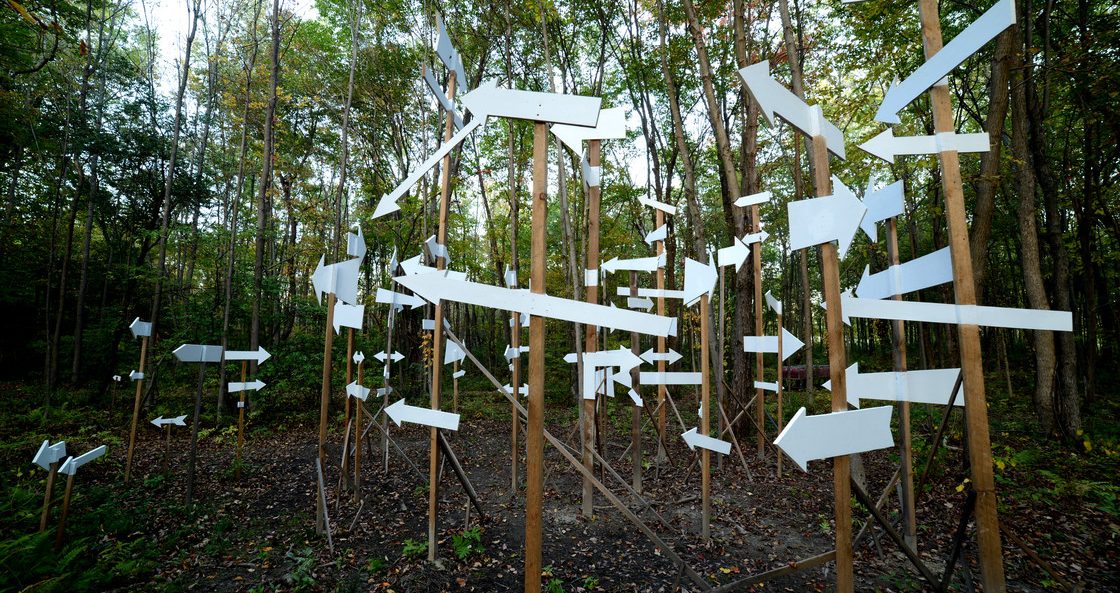 With Kim Beck's NOTICE: A Flock of Signs (at Omi), visitors will discover clusters of signs crowded along landscape pathways. Sited in several areas throughout The Fields, the overabundant, densely packed signs create surprising, nonsensical landscapes in an otherwise serene nature preserve. Beck, who was an Art Omi: Artists resident in summer of 2013, has intended that the signs deliberately perplex, misdirect, and even contradict one another. A look-at-me garden folly, NOTICE: A Flock of Signs elevates the everyday—the paths, trees, flora, and traces of fauna—to something worthy of notice. This iteration of NOTICE is the second in a series; the original piece was installed at the Virginia Fairbanks Art & Nature Park and commissioned by the Indianapolis Museum of Art in 2013. This iteration has been made especially in response to Omi.

Kim Beck (b. 1970) has shown work on the High Line, at the Walker Art Center, Carnegie Museum of Art, Smack Mellon, Socrates Sculpture Park and the Warhol Museum. She has been a fellow at the MacDowell Colony, Yaddo, Marie Walsh Sharpe Space Program, International Studio & Curatorial Program, Cité Internationale des Arts, Vermont Studio Center, VCCA and has received awards from ARS Electronica, Pollock-Krasner, Heinz Foundation, Thomas J. Watson Foundation and Printed Matter. She is an Associate Professor of Art at Carnegie Mellon and was a resident at Art Omi in 2013.