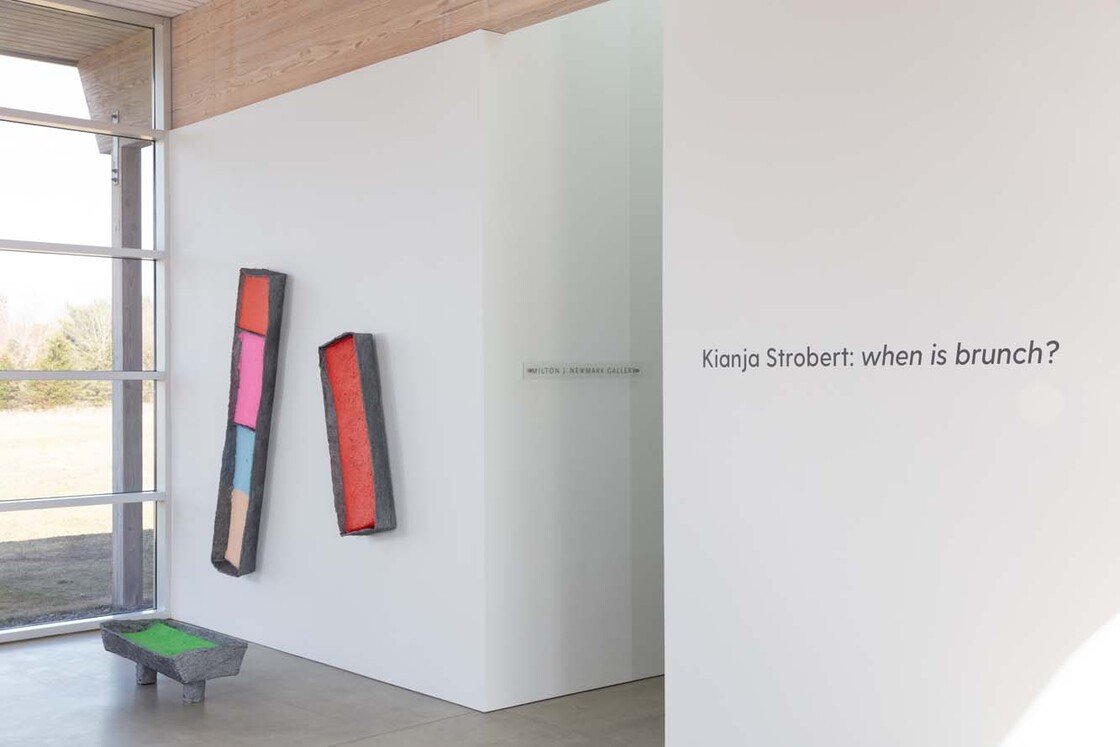 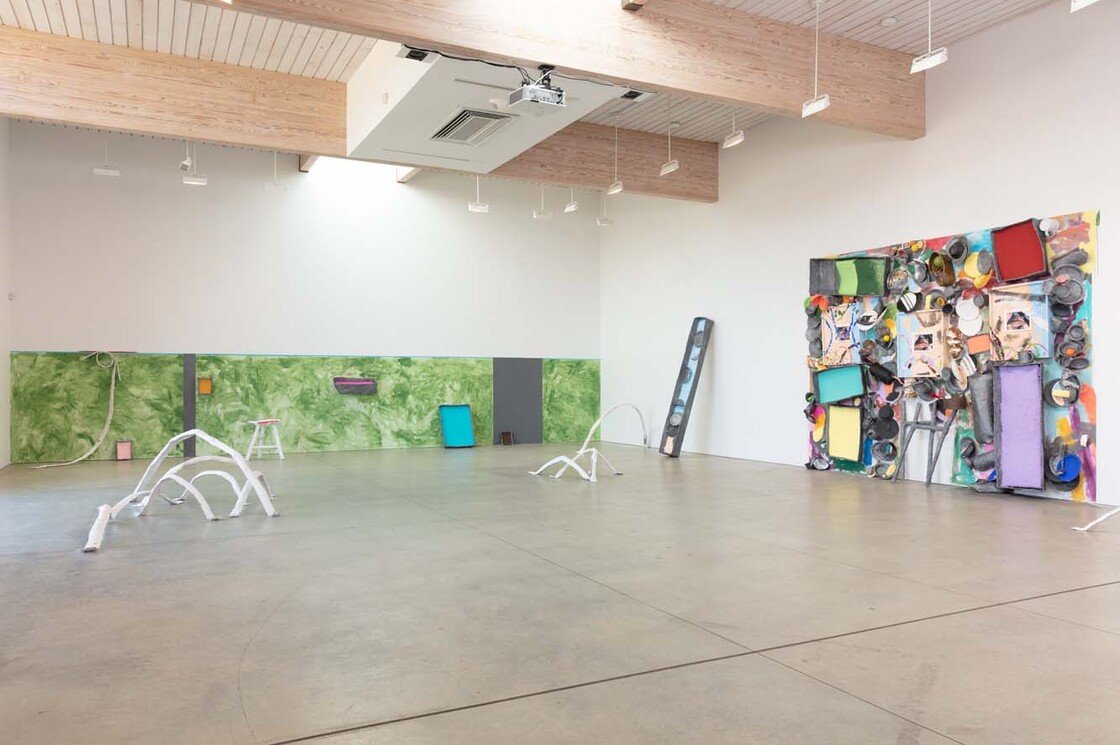 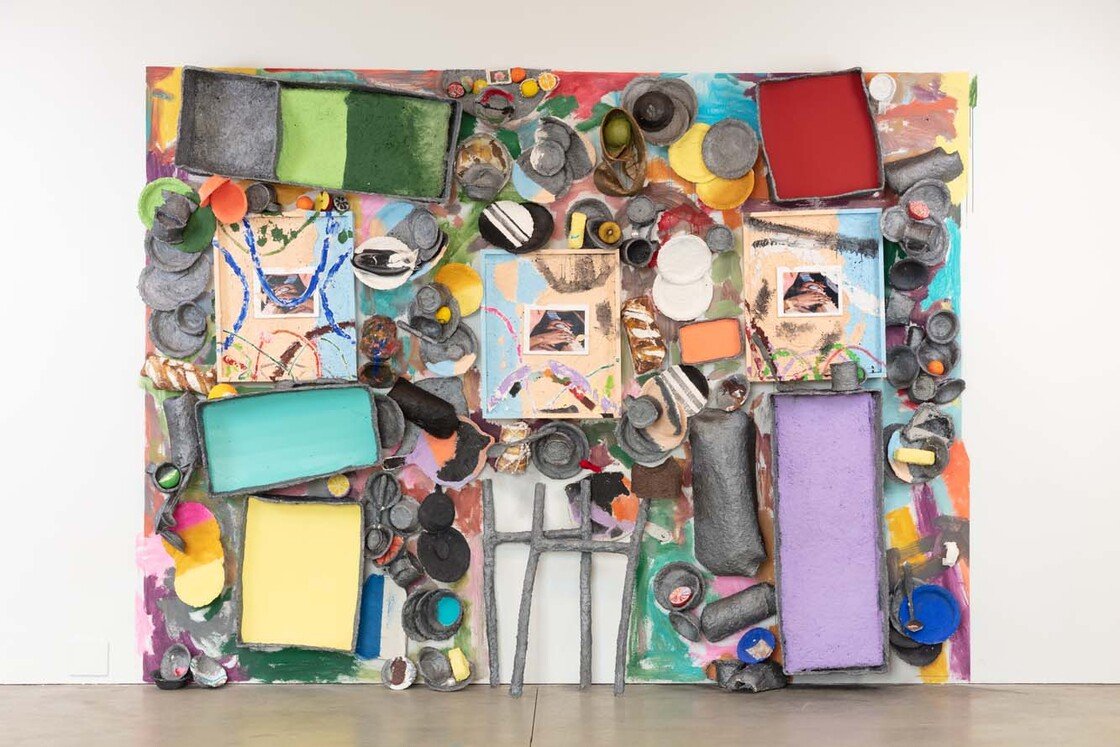 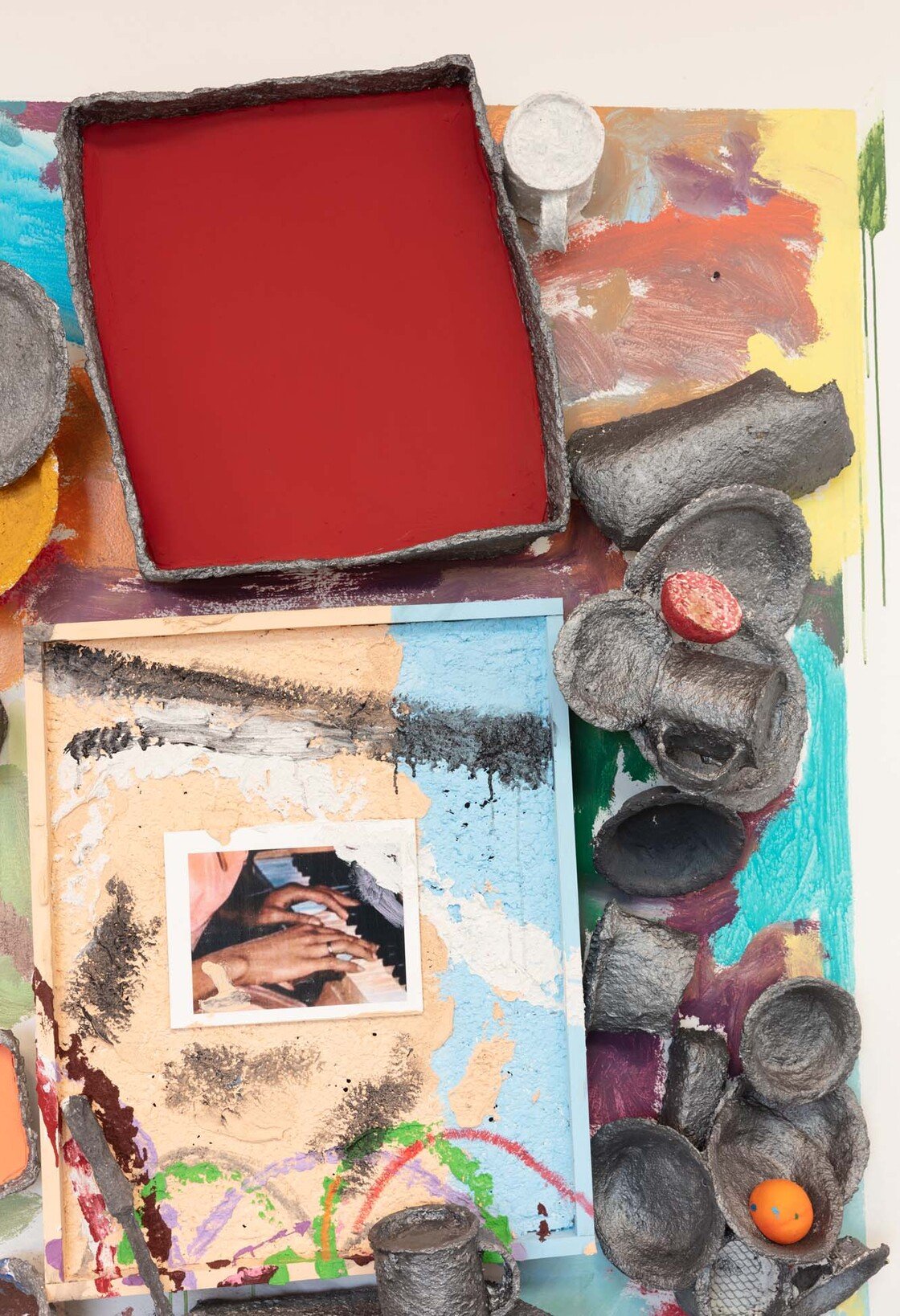 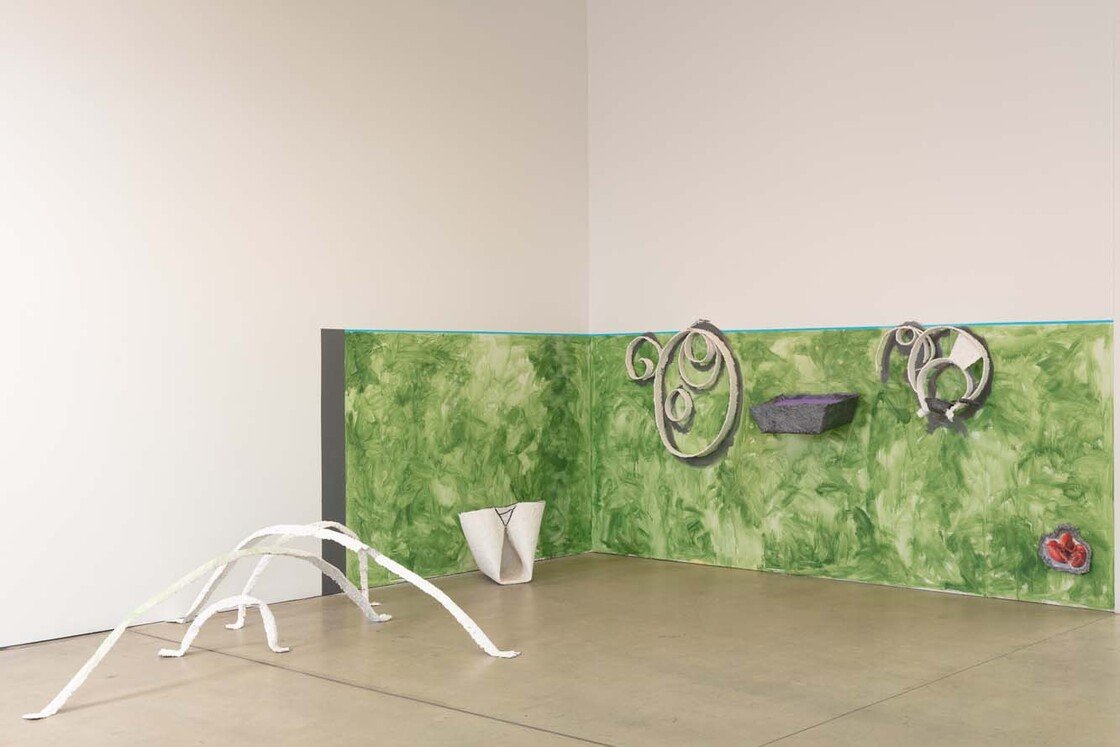 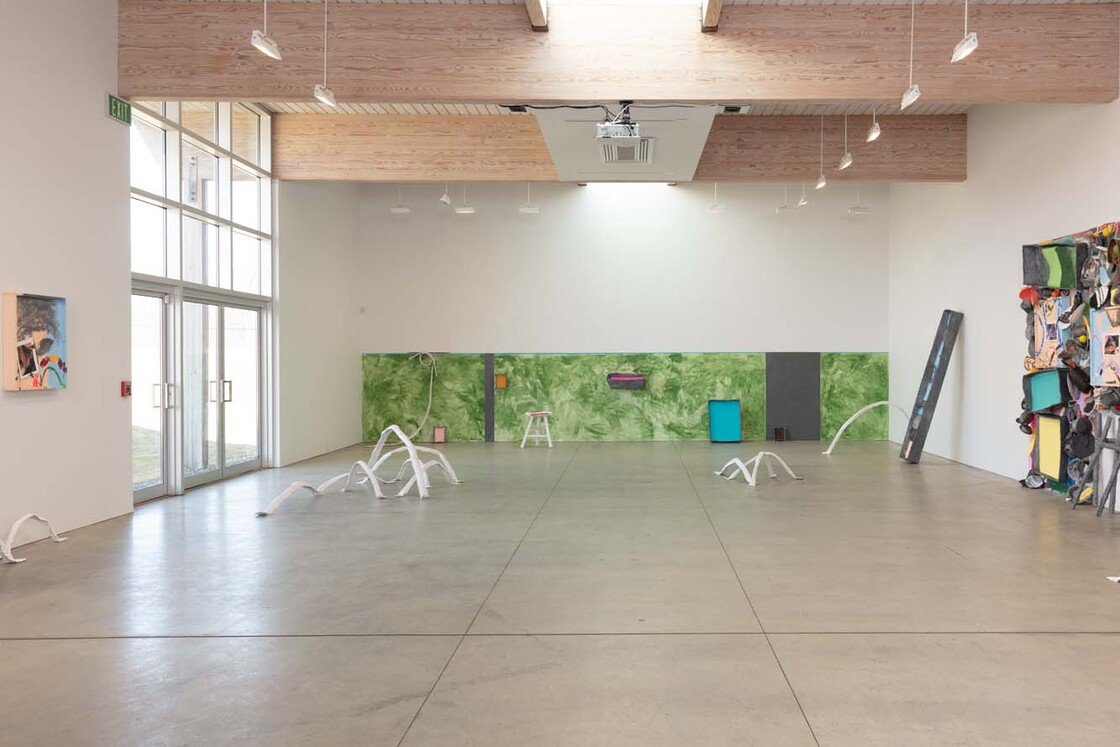 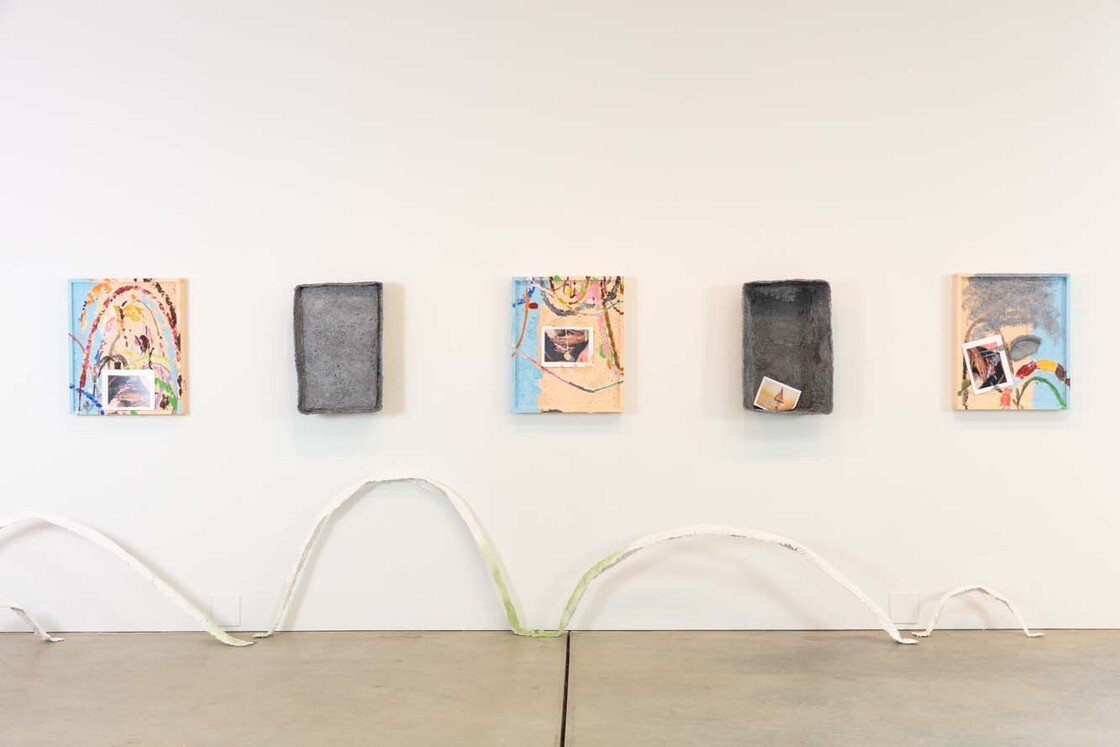 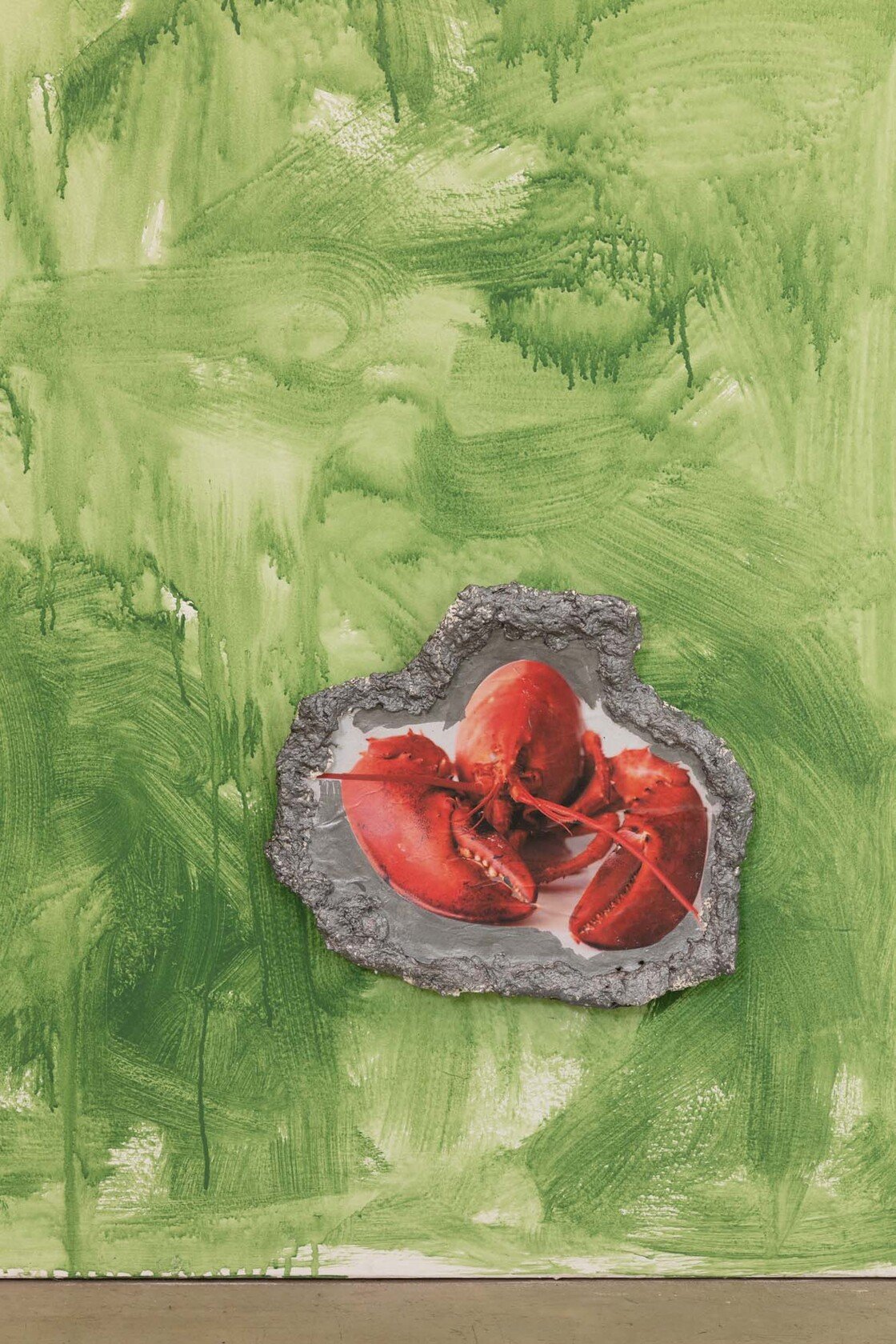 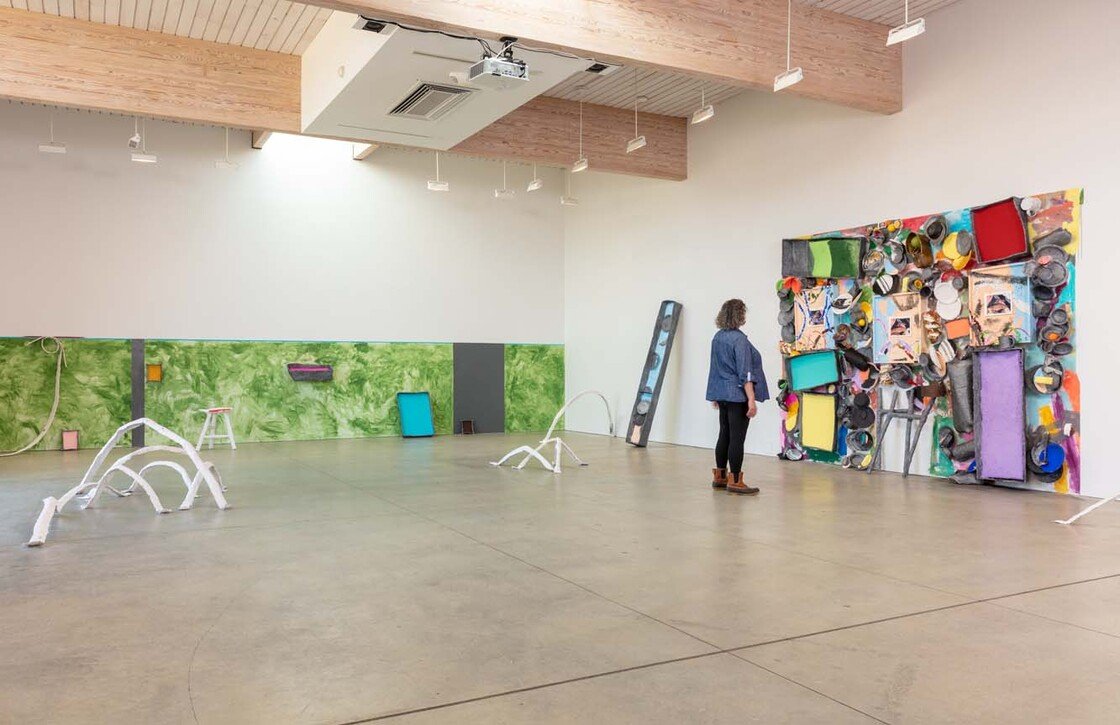 when is brunch is an exhibition of sculptures, paintings and objects in-between by Kianja Strobert.

At first glance the artist presents a world of amusement. Bright colors, expressive marks and textured surfaces leap between objects that rest in haphazard configurations on the wall. In a short amount of time what emerges is a glimpse of an ideology in which material transitions, mark making and form simultaneously suggest the elevated, the quotidian and the utilitarian. Painting is not left to present only a window, but is discussed as a process that participates in the world of production and consumption.

Consumption is represented by multiple symbols; objectified into plates, cups, bread and butter; and hinted at through the use of repetition suggestive of mass production. Repeated images of fingers playing, repeated troughs of paint, repeated lines jumping from the wall into the viewer’s space. In this artist’s work, the raw material, the product, the process, the inspirations, and the goal are presented together on the wall.

Despite the glimmers of leisure and fecundity presented through objects, bright colors, images edited from Instagram accounts and advertisements, the artist does not allow the viewer to escape the factory. The gray of this world is pewter, a metal alloy dating back to ancient Egypt and used throughout human history as the primary material for utilitarian objects such as plates and utensils before the invention of porcelain. The open pewter colored troughs attached to the wall containing bright colors of paint, put the viewer in the same position as the artist—between potential and product. The “paintings” themselves are strewn throughout and smeared with lines, at times of bright colors and in other moments in what appears to be soot. The repeated central image of hands playing a piano is an odd addition that encourages the viewer to recognize the noise of the event on display—the noise of collapsing hierarchies, smearing, painting and of machines.

While Strobert’s work has previously been spoken of as purely abstract, she maintains that she has never been far away from the nameable. The arches that jump around the space are lifted from the small paintings and use their physicality to insist on being named. Other sculptures emerge as well. Consistently at play is the role of the tactile. In this way Strobert taunts the audience. The surfaces beg to be touched, but the wall reconfirms its authority.

The tensions at play are a new kind of approach for Strobert as she allows us into her de-hierarchized world. In her own words: “Certain thinkers definitely had it right. Where are we now? Did you know people are getting plastic surgery to look like their Instagram filters? Did you find my earring? World peace, yeah we need some of that. Should I put babushkas in the show? Hmm pink or blue? Why would we even debate manufactured consent anymore? If I work harder maybe I can get to that sunset? Is today the same day as yesterday? Oh, that sunset is from an ad. Buy more metal. They want something new every time. When the hell is brunch? What kind of f#^%@g brunch is this?”

Kianja Strobert (b. 1980) received her BFA from The School of the Art Institute of Chicago and her MFA from Yale. She has had solo exhibitions at the Studio Museum in Harlem, NY; Marinaro, NY; Jack Tilton, NY; and the Santa Monica Museum of Art, California. Strobert has been included in numerous group exhibitions including shows at Olana State Historic Site, Hudson, NY; Kemper Museum of Art, Kansas City, MO; Gavin Brown’s Enterprise, NY; Lehmann Maupin, NY; and The Contemporary Arts Museum, Houston, TX. Strobert lives and works in Hudson, NY.