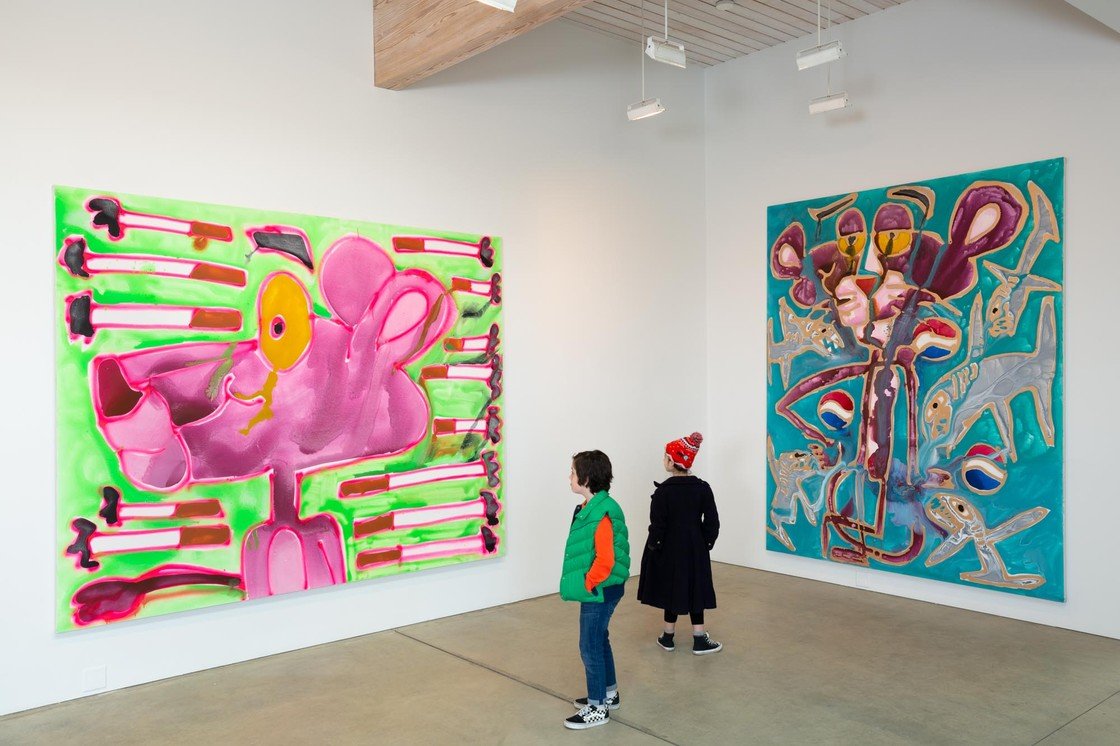 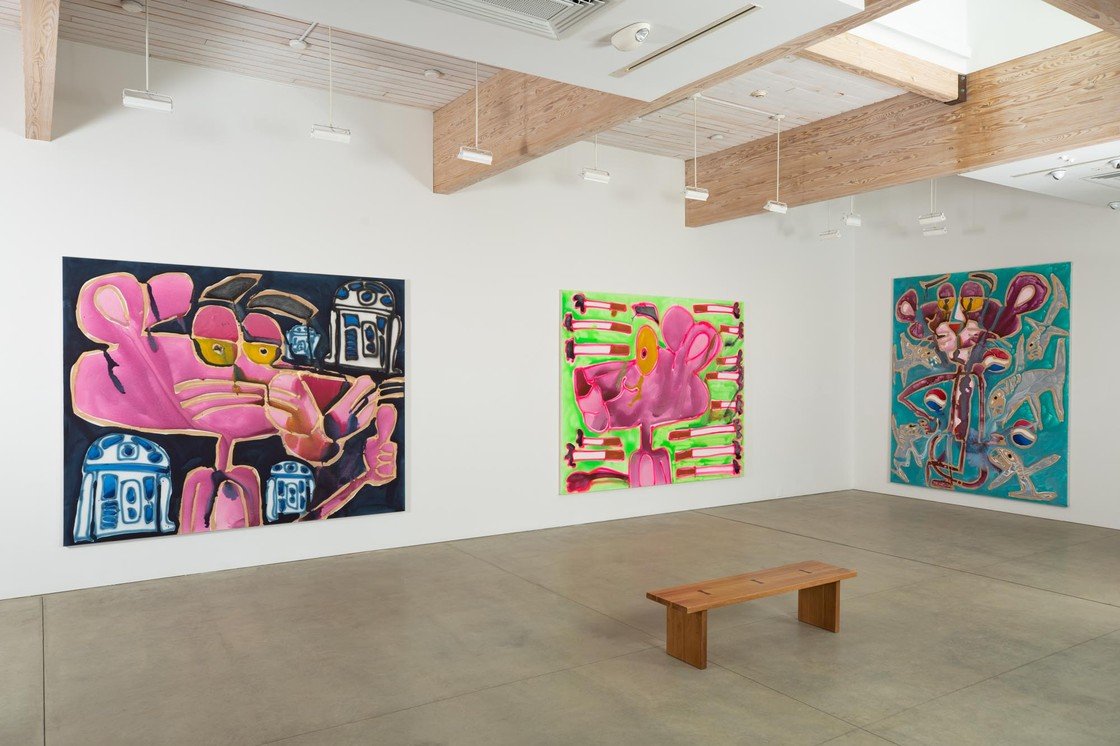 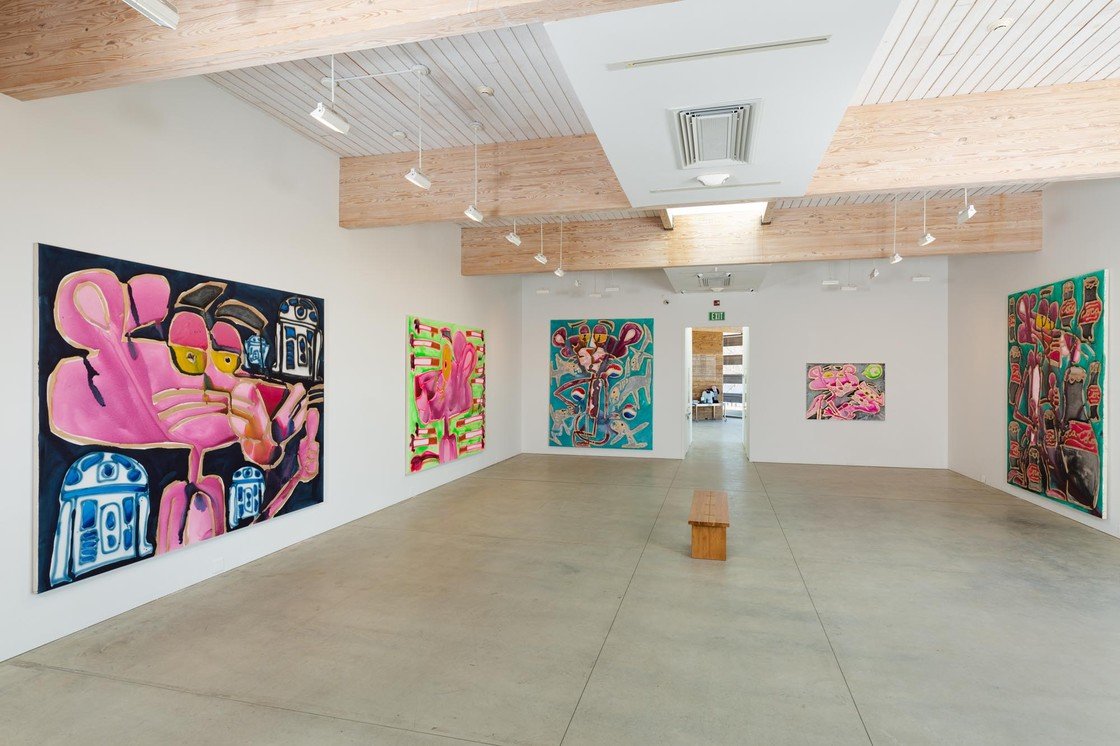 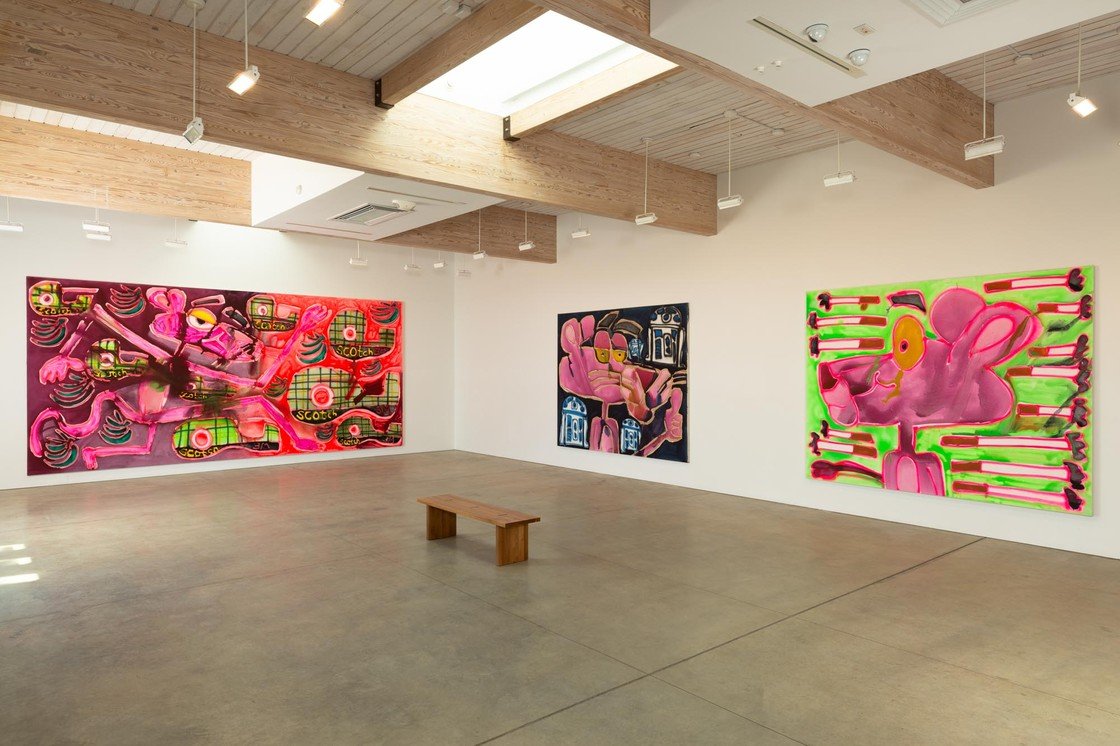 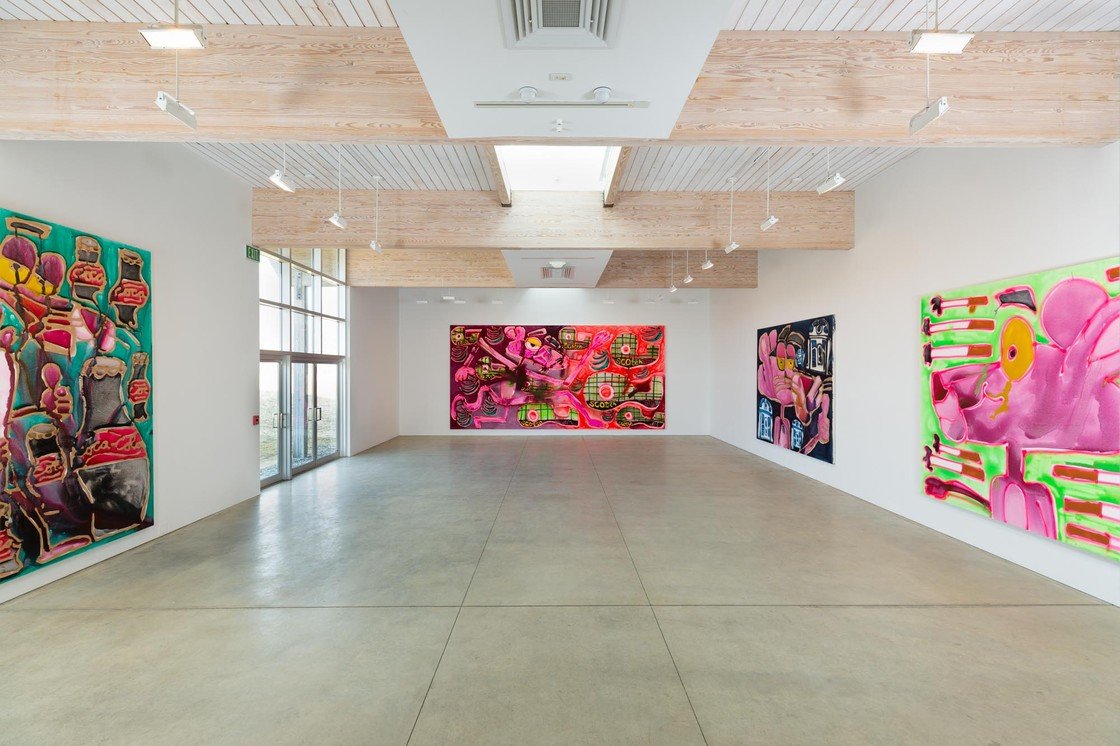 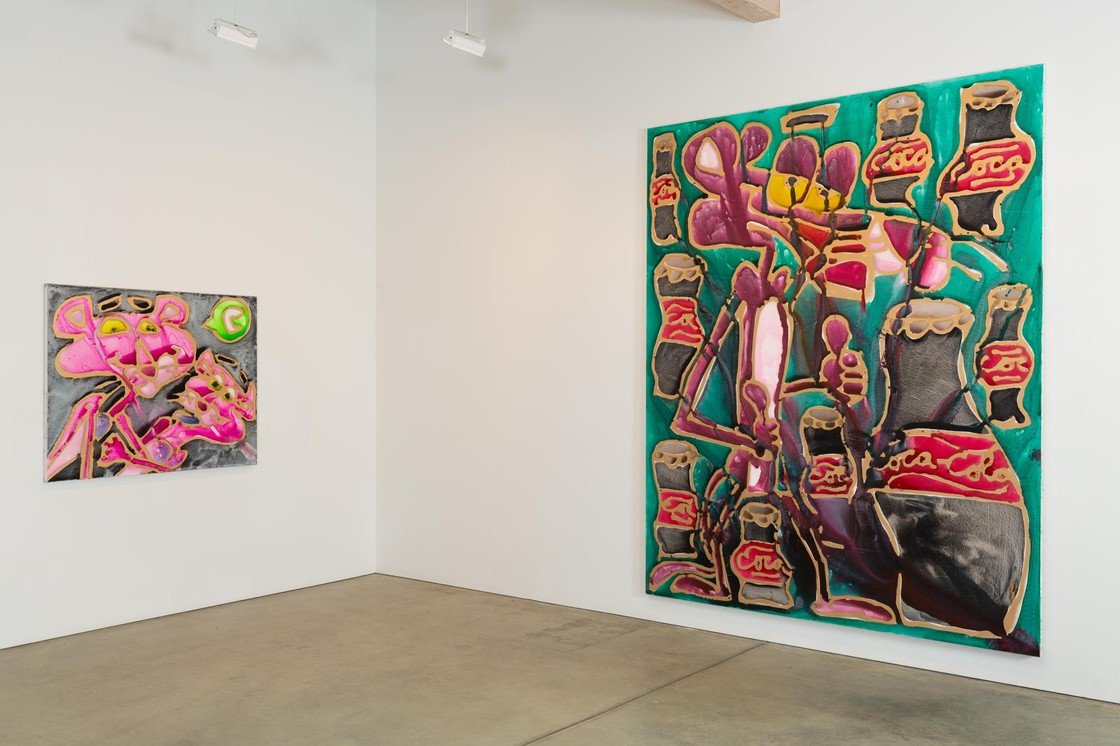 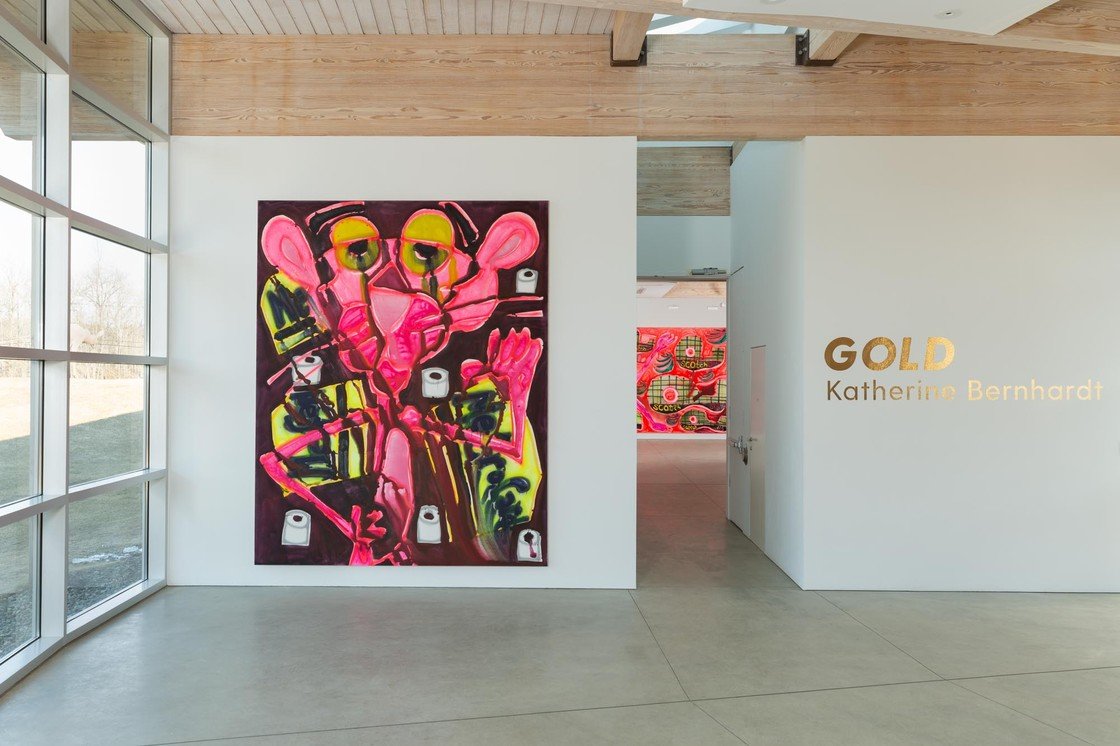 Nike Panther, a limited Katherine Bernhardt edition, is available starting 12 noon EST on Tuesday, May 21 exclusively at Art+Culture Projects. A portion of proceeds from the sale of this print benefit Art Omi.

Art Omi is situated in the beautiful Hudson River Valley in Ghent, NY, overlooking 300 acres of rolling farmland, impenetrable wetlands, and mysterious wooded areas—an idyllic North American setting for many kinds of wildlife. Panthers however seem to have evolved exclusively across Eurasia, and they became distinct from other species of felines around 11.3 million years ago. Fossils of most panther species had diversified by around 4.35 million years ago and have been uncovered in sub-Saharan Africa and parts of Asia. Although solitary and territorial by nature, the Hudson Valley has attracted an extremely rare subspecies, the Panthera roseus cinematicus, also called the Pink Panther. Not yet captured or tagged by scientists, this panther first appeared on screens in 1963 and for 113 minutes of color footage. Some claim that the Pink Panther was a figment of the imaginations of Maurice Richlin and Blake Edwards but the panther has lived on in multiple forms to star in films, video games, television series, and merchandise. And now seven large paintings of this enigmatic yet illustrious panther make up Bernhardt’s show.

Bernhardt began painting the Pink Panther after she arrived at the Pink Palace Hotel (also called the Royal Hawai’ian Hotel) located on a sandy beach in Waikiki, Oahu, not far from an eighteen-foot tall bronze sculpture of King Kamehameha I, the greatest Hawai’ian warrior leader who is usually decked out in tons of enormous lei created from eight species of bright pink orchids. The pinkness of this trip continued after she checked into the hotel that featured pink bathroom towels, pink sheets, pink eye masks for sleeping, pink carpeting, pink beach chairs, pink beach towels, pink stationery, pink sunsets, pink pancakes at breakfast, and the Pink Panther on TV screens. After Bernhardt repeatedly watched videos of the panther along with her son while lounging atop their huge pink bed and while strolling around the hotel grounds while her son Khalifa continued to watch Pink Panther videos from a cell phone, she decided that the panther could look great on large-scale canvas too.

These panther works are different from past works; more objects than usual fill up the space around her panthers, and most panthers are surrounded by one sort of patterned object alone. A couple of works feature panther busts or the panther in profile—an emulation of portraits from antiquity—and something that again forces us to question the origin of this big cat. In one painting the Pink Panther is seen with a female pink panther, potential evidence that more than one of the species exists at large. The paintings are basically figure paintings, and due to the panther’s elongated and sleek lines, they are not dissimilar to Bernhardt’s early work that focused on ultra-thin supermodels such as Gisele and Kate Moss. In a recent interview Bernhardt described the Pink Panther as “tall, skinny and hot”—unlike the unhealthy fat cat, Garfield, who currently stars in a show of hers in Belgium. It is unclear how the panther stays in shape because, like Garfield, he too is often surrounded by the same sorts of junk products (Pepsi, Coca Cola, Doritos, greasy pizza, and cigarettes).

The original 1963 version of the panther was portrayed in pastel pink evoking charm, tenderness, and calm while Bernhardt’s versions now depict him in hot bold fluorescent pinks, plums, mauves, magentas, fuchsias, bubblegums, lavenders, etc. A significant part of this show consists of Bernhardt’s exploration of the spectrum of pinks that can be mixed from modern-day pigments. Part of these panthers’ uniqueness comes from those paints flowing from the freely running, staining, oozing, and merging pinks that make up his form that is often outlined and contained by gold—hence the name of this show.