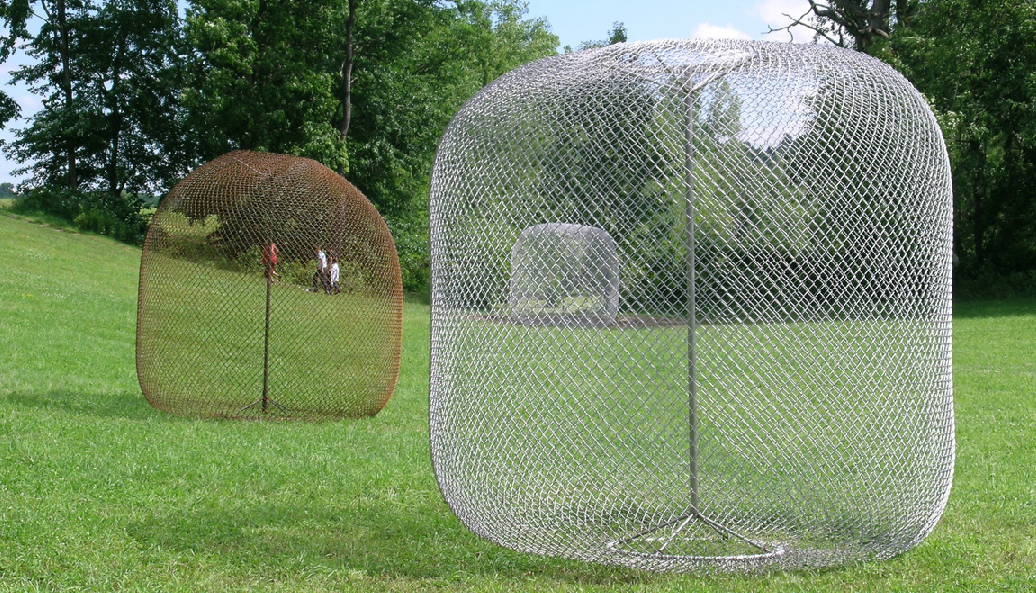 John Ruppert's Hay Stacks are a comprehensive outdoor installation that took place on the field along County Route 22, visible from the road and prominently in view to those driving by. These sculptures are a part of his "chain-link fabric" series in which this fence material is curved around a central armature to take on an orb-like form. The title comes from the likeness of these shapes to bales of hay that one might see from the road as they pass a farm, which is not an unfamiliar sight in Columbia County.

The chain-link material provides a ghostly effect when it exists on a landscape, allowing the viewer to simply peer through the material. These works are specific to the landscape, and would provide an alternative context if shown indoors, at a gallery. These "membranes" sit within the environment of rolling grassy hills (as well as existing in a snow-scape in the winter) and act as structures, figures and monuments. His material is seamless and malleable; in one direction it is rigid, yet in another, will collapse on itself.

John Ruppert is well known for his chain-link sculptures, but uses a variety of other materials including steel, cast metal, concrete, soil, and full-scale installations and architectural interventions. Ruppert has exhibited his sculptures throughout North America, Europe and Asia in solo and group shows since the late 1980s. His works belong in several public and private collections, and has had several notable commissions from various institutions and individuals throughout his career. He has been awarded a multitude of grants and awards, and has been featured in several well-known publications throughout the world.