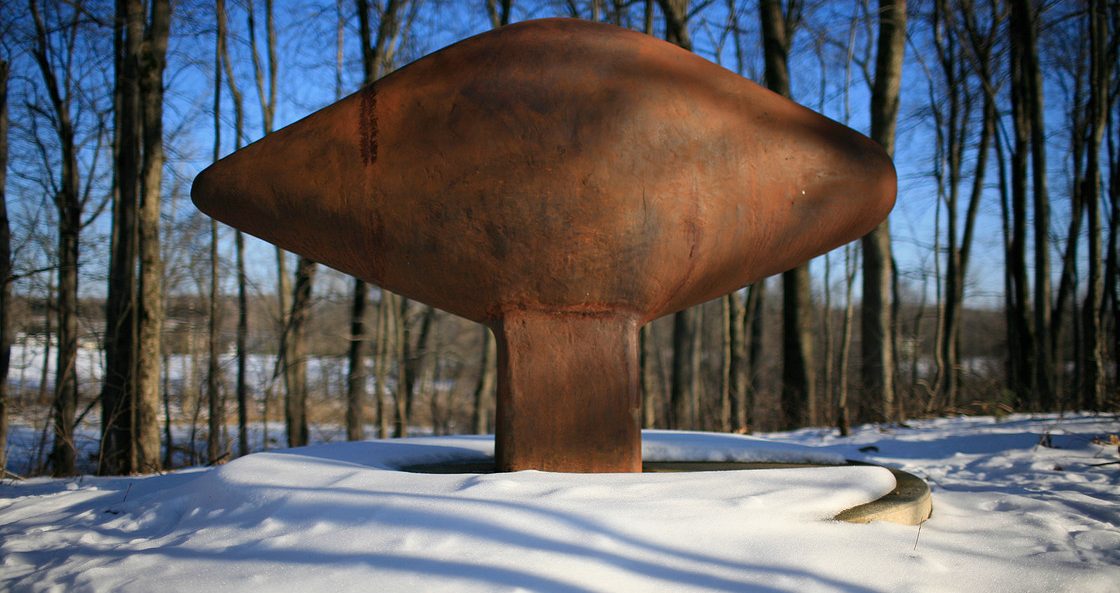 Jene Highstein has concentrated on various array of archetypal forms such as cones, cylinders and spheres for much of his 40-year career. He has worked with minimalist ideas and styles since the 70s, concentrating on pristine geometric and archaic biological forms, but most characteristically his sculptures exist in the space between. He is a materialist, and his values align more with the classic modernism of artists such as Isamu Noguchi and Constantin Brancusi rather than the modernist artists of his time.

This piece is a large pod-like sculpture that exists at the same height as many viewers, which is atypical of his usual "Flora" or "Fauna" sculptures, which stand at a looming thirteen-feet tall. This iron piece is devoid of any surface treatment, where the rusting sculpture experiences the weather as if it were a living object. His rough weld marks speak to minimalist sculpture as reflecting back on painting styles of the 70s; where the action of the paint defined the pieces' subject and context. Here the iron is the context and the subject as well: the rough welds and rusting color speak back to the objectivity of the work and the expression of the artists hand, these almost painterly marks upon the surface are just remnants of its' very own construction.

Highstein's numerous projects include monumental sculptures, towers, pavilions, and amphitheaters in both public and private spaces. Highstein is included in the permanent collections of numerous museums, among them: the Metropolitan Museum of Art, the Brooklyn Museum, Solomon R. Guggenheim Museum, and the Museum of Modern Art in New York; the Baltimore Museum of Art; the Dallas Art Museum; the Fogg Museum, Harvard University; the Los Angeles County Museum of Art; the Museum of Contemporary Art, Chicago; and, the National Gallery of Art, Washington, D.C.