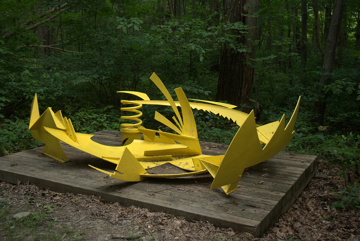 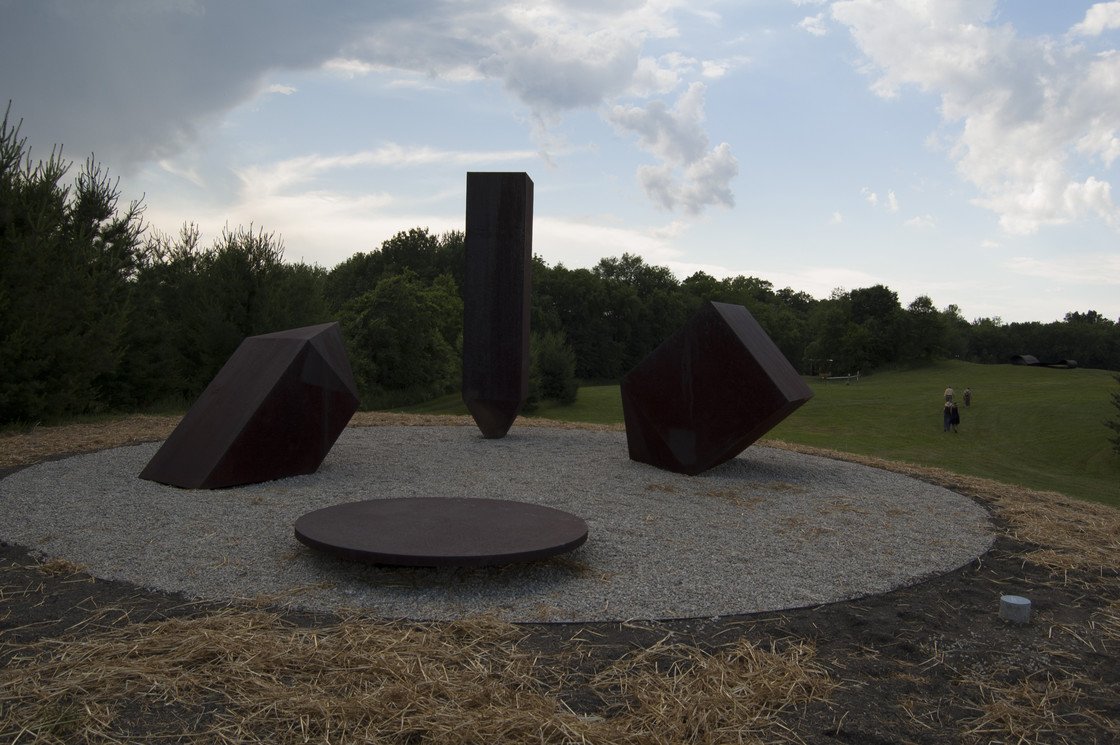 Chickasaw, 1973
Steel and enamel paint on wooden base

Isaac Witkin's early sculptures were heavily influenced by former mentor Henry Moore and hs organic forms in the early 1960s. By '64, he began working in fiberglass- incorporating bright colors while continuing to reference biomorphic forms. There was a dynamic equillibrium of energy and movement to Witkin's bright, early fiberglass works. In 1965 he moved away from fiberglass and towards steel and aluminum structures with complext cubist compositions. He began to align his works with the minimalist movement of creating large, heavy, Cor-Ten steel geometric strucutres that seemed to balance precariously on the landscape. His steel works typically included other elements, as with In the Beginning, in which he incorporated four steel forms inside a site-specific circle made with rocks and small border. He continued to use bright colors throughout his career (as evident with Chickasaw), but moreso explored spatial relationships between negative space, surface quality, and scale.

Isaac Witkin was a South Africa born artist who emigrated to the UK in 1956 and enrolled in Anthony Caro's sculpture department at St. Martin's School of Art in 1957. He graduated in 1960, and subsequently worked as an assistant for two years to artist Henry Moore. He had his first solo exhibition at the Rowan Gallery in 1963, and began teaching at St. Martin's that same year. He left London in 1965 to move to the United States, and attended a residency at Bennington College in Vermont, later becoming a U.S. Citizen.

Witkin taught sculpture and exhibited extensively in the USA until his passing in 2006. His work is featured in numerous public collections internationally, including the Calouste Gulbenkian Foundation in Lisbon, Portugal; the Hirshorn Museum and Sculpture Garden in Washington, DC and the Tate in London, UK.