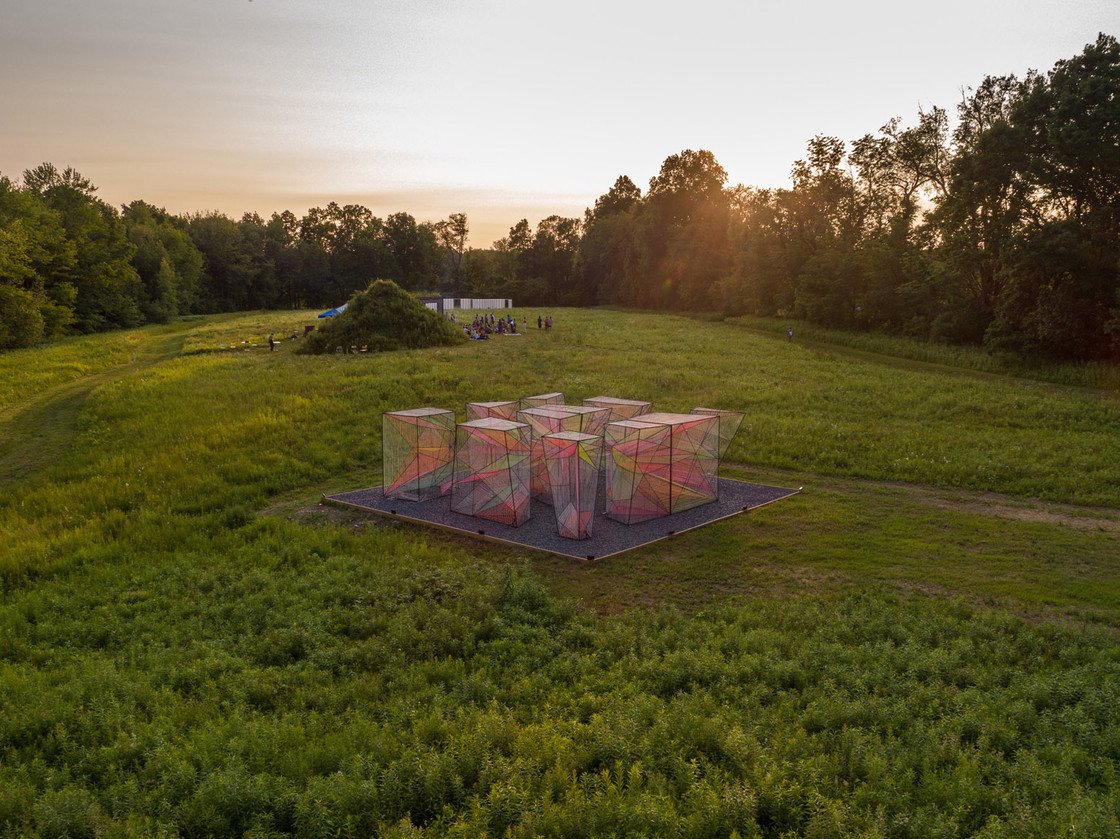 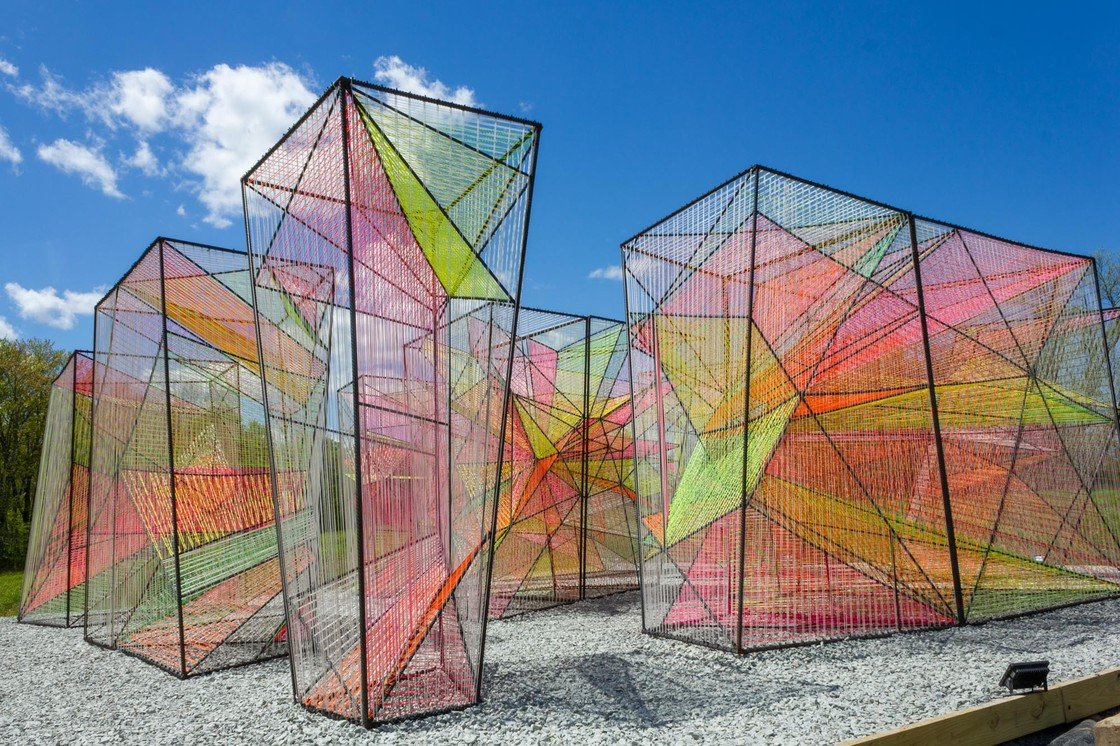 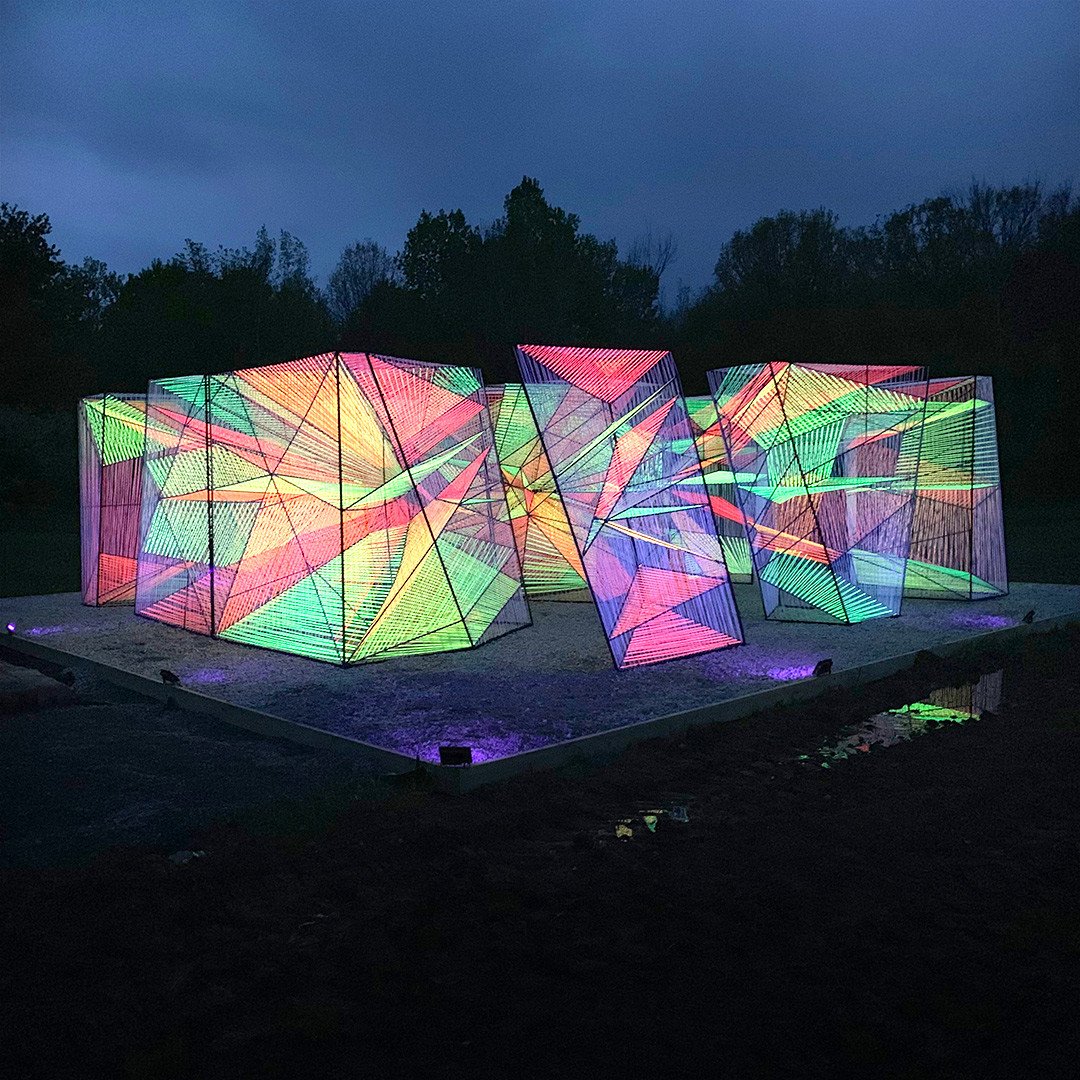 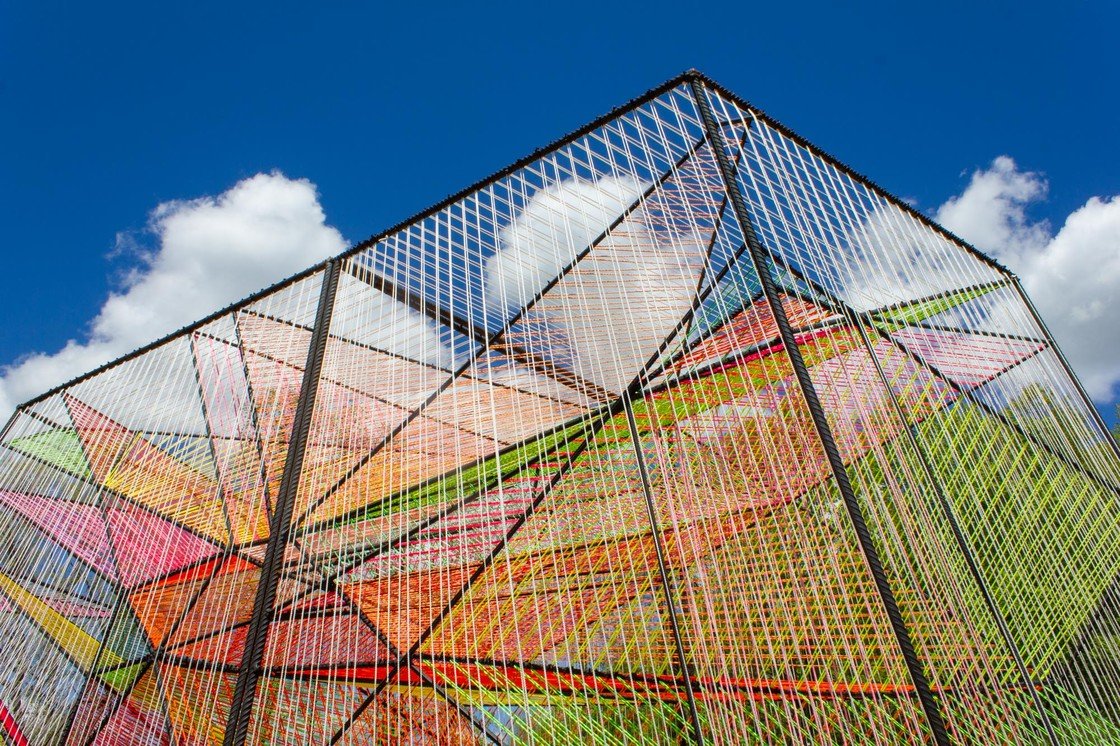 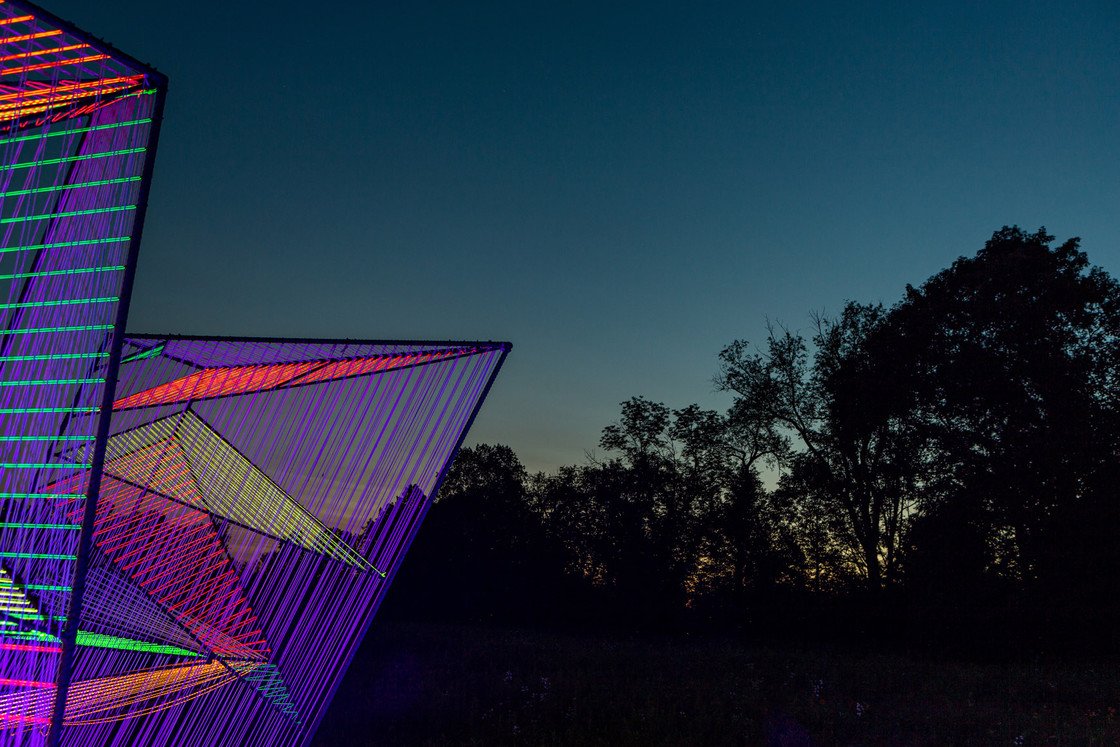 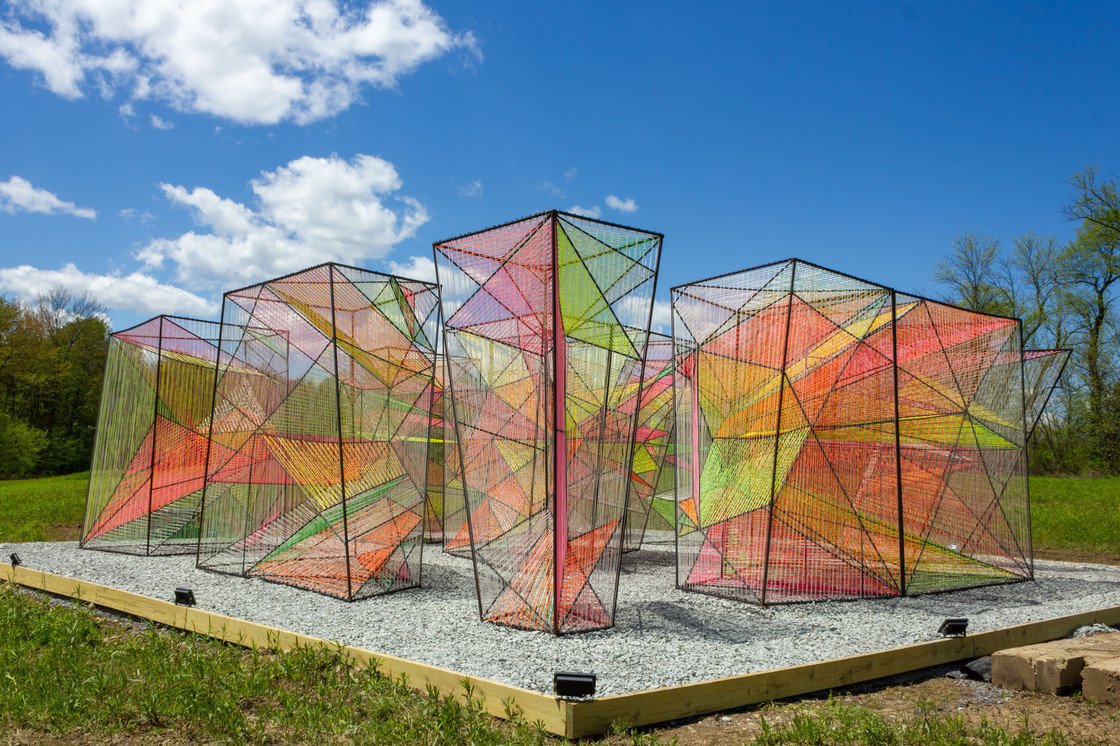 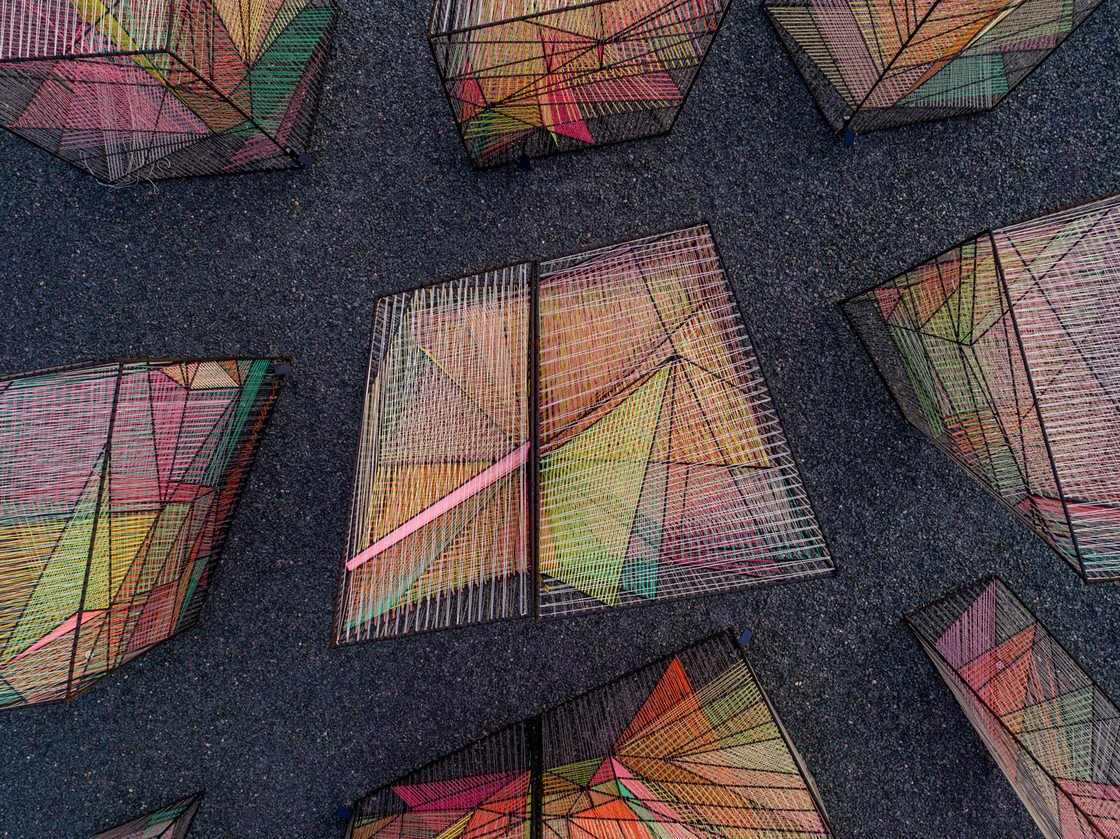 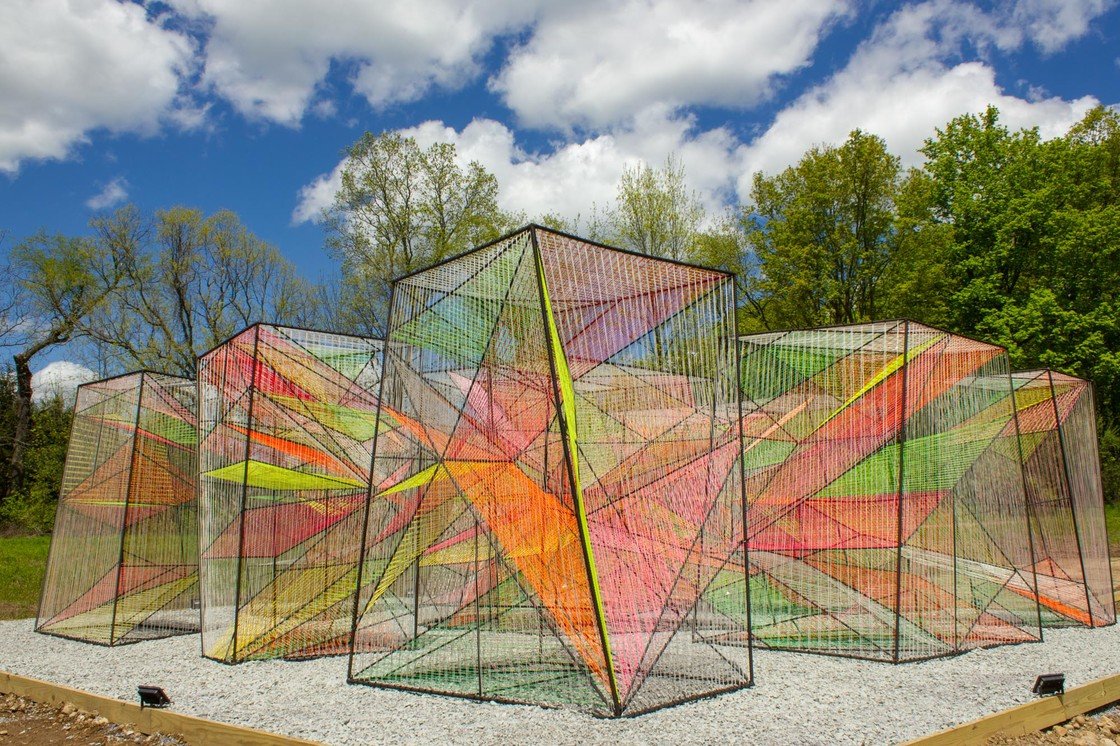 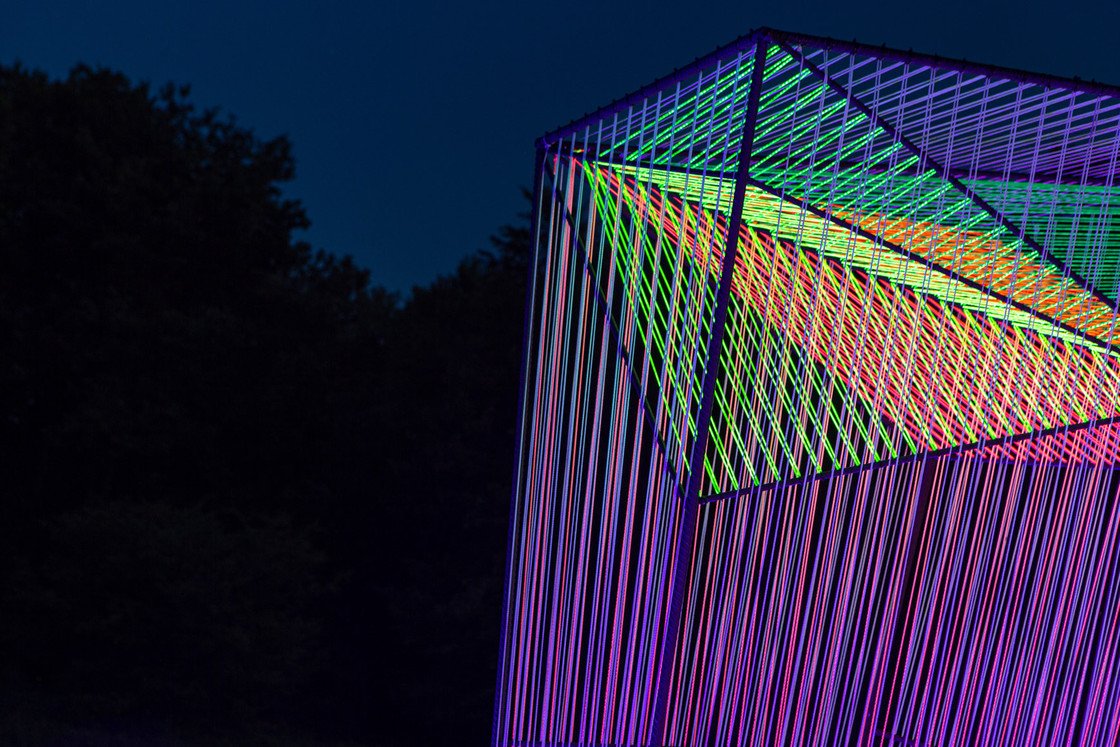 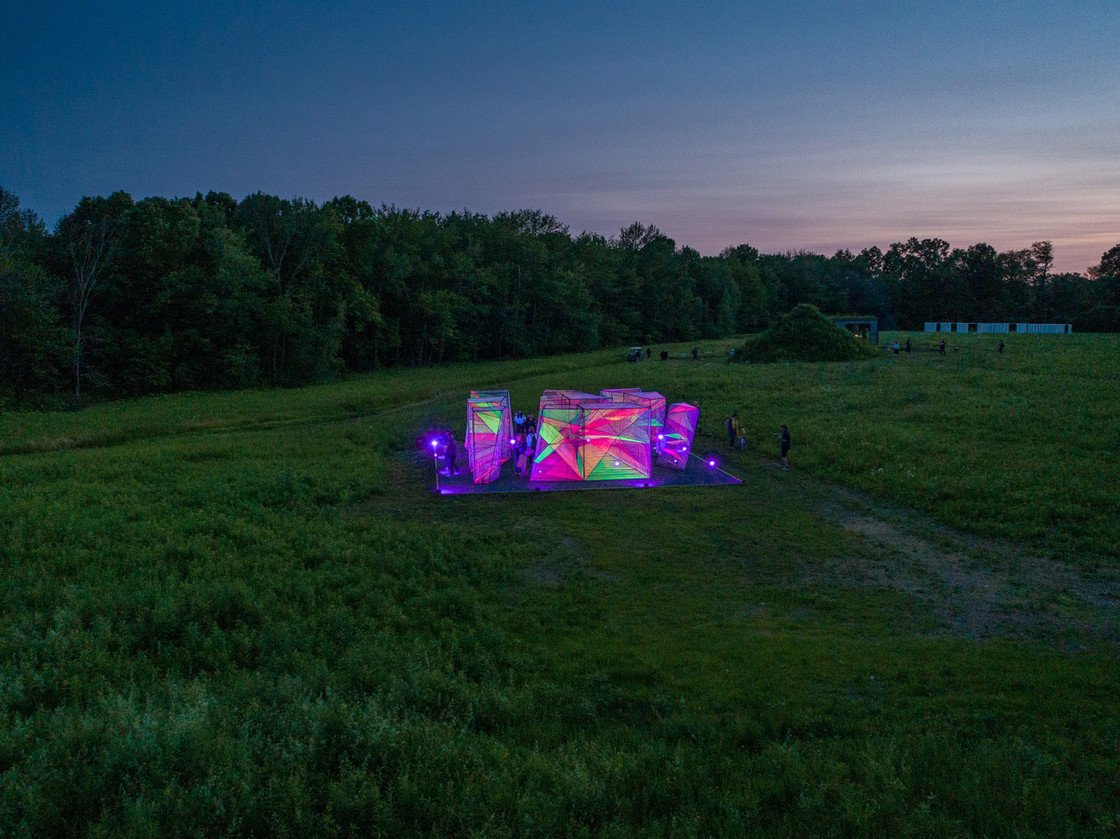 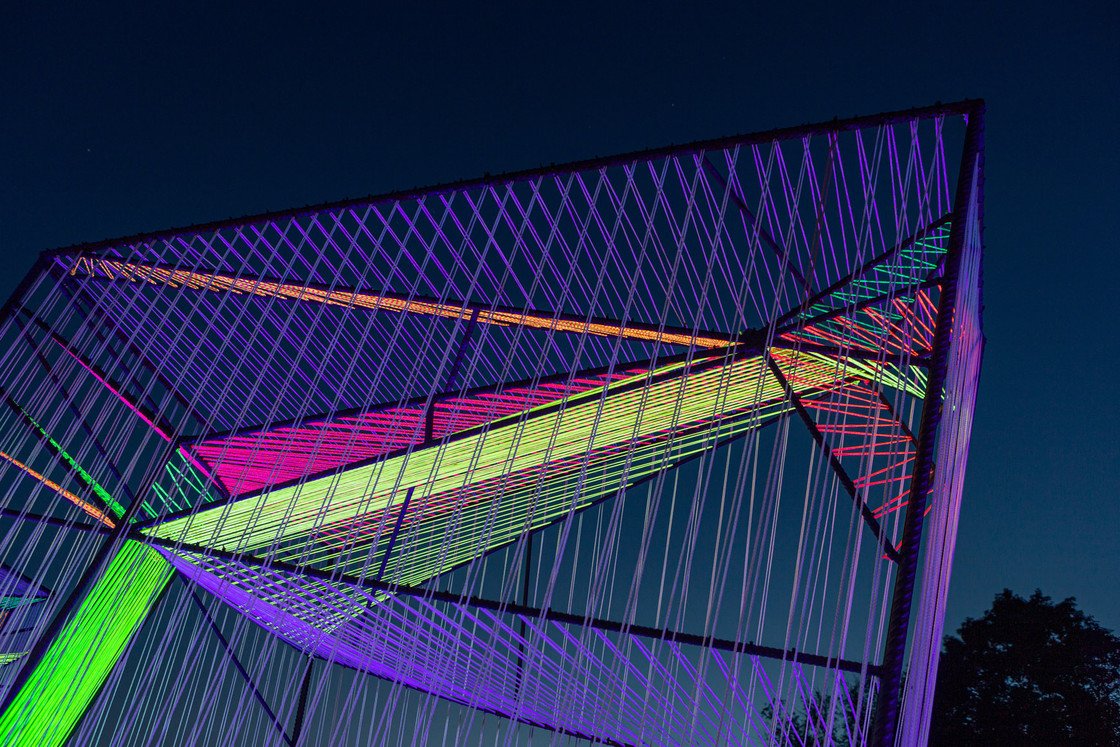 Prismatic is an immersive, large-scale experience of color, light, and space. Unique on all sides, eleven individual elements come together to create a nine-block layout, encouraging visitors to both explore its exterior walls and internal corridors. Its design balances the forces of expansion and limitation, with its prism-shaped forms breaking away from a central point, all contained neatly within the surrounding square perimeter. Previously, iridescent rope was woven between the lattice of rebar within each element, with gaps between each string providing transparency and creating the visual effect known as a moiré. Now painted in a fluorescent magenta color, chosen specifically to stand out in nature, Prismatic allows for further visual investigation and glows brightly when exposed to UV light. As visitors turn their gaze or walk about the space, the poppy pink structure provides contrast with landscape and sky throughout the year, and creates new conversations with the surrounding site, challenging visual perception.

Hou de Sousa is a New York based design studio whose projects span between architecture and public art. Some of the studio’s recent honors include the winning proposal for the Architectural League of New York’s 2016 Folly/Function competition to design and build an open-air educational space at Socrates Sculpture Park. That same year, the office won the Re-ball! International Design competition, and built an installation titled “Raise/Raze” within Dupont Underground in Washington DC. Hou de Sousa was awarded Second Prize for their first large-scale competition proposal in 2017; the Museum of World Writing in Songdo, South Korea. The office has been featured as a “Firm to Watch” in Architectural Record and has been published domestically and internationally in media outlets such as Architectural Review, Domus, Dwell, Interior Design, Metropolis, NBC, and The Washington Post.

Originally from Shanghai, Nancy Hou grew up in Quito, Ecuador and went on to receive a Bachelor of Architecture from Cornell and a Master of Architecture from the Harvard GSD. In addition to her practice at Hou de Sousa, Nancy also serves as a Board Member of HAAUS (Harvard Alumni Architectural and Urban Society) and teaches at Parsons School of Design.

Prior to co-founding Hou de Sousa, Josh de Sousa designed a wide range of projects at Skidmore Owings & Merrill, Joel Sanders Architect, and Office for Metropolitan Architecture. Josh also received his Bachelor of Architecture at Cornell, and a Master of Architecture from Harvard and teaches at Parsons School of Design.