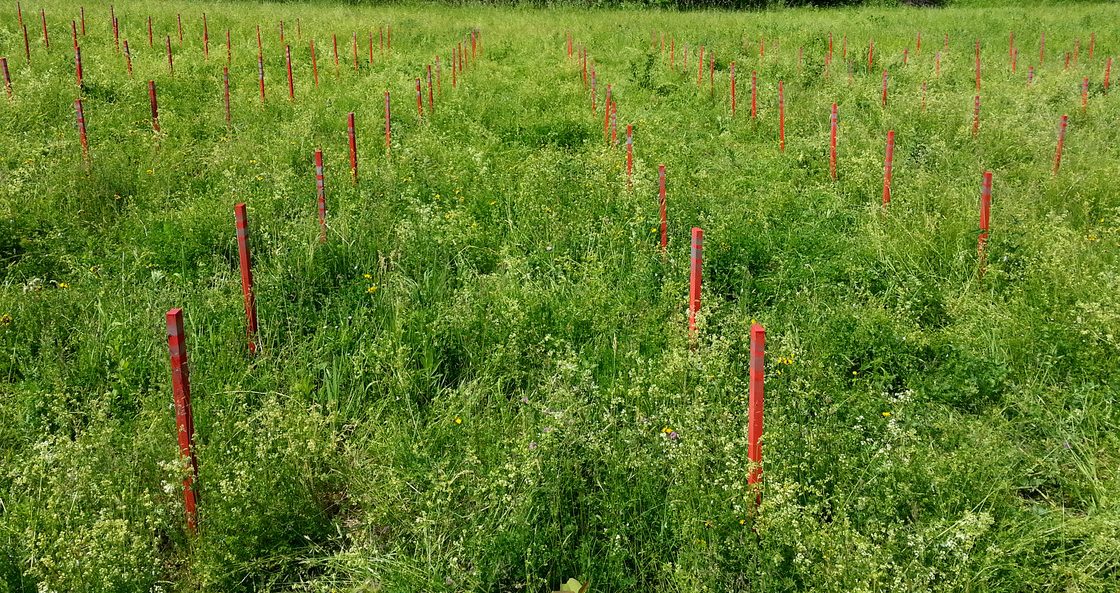 Denise Hoffman Brandt presents a project that transforms a field into a carrier of complex ideas. As Director of the Landscape Architecture Graduate Department at City College of New York, she approaches the landscaped field as a frame that can be filled with action, much like a battlefield. The project, titled Red Carpet Encrypted explores themes of surveillance and power, and consists of a series of inactive and "live" stakes (plantings of red dogwood) carpeting the gentle slope of a hill in Art Omi: Architecture's Field 01. Striking and fully embedded within the landscape, Red Carpet Encrypted is simultaneously natural (as the live stakes erupt with foliage) and industrial, marking man's control over the landscape. Throughout the seasons, the live stakes will erupt with foliage and then revert to bright red stakes against the snow in winter.

Banding on the stakes spells out an encrypted message formatted into Morse Code, adding another element to the piece. Decoded, the text directs visitors on a path that reveals the glacial geology of the fields and a second, hidden carpet (additional "live" stakes planted in the woods.)

Says former Art Omi: Architecture Program Director Peter Franck, "The utilization of a planted installation as a built form exemplifies Architecture Omi's commitment to experimentation regarding the act of creating architecture in the landscape. The intermixing of dead and live stakes creates a consciously coded landscape intervention and acts as a metaphor of the act of building."

Denise Hoffman Brandt, RLA is Director of Landscape Architecture and Associate Professor in the Bernard and Anne Spitzer School of Architecture at the City College of New York and principal of Hoffman Brandt Projects, LLC. Her work focuses on landscape as ecological infrastructure – the social, cultural and environmental systems that generate urban form and sustain urban life. Hoffman Brandt's research and practice have received numerous awards, such as a 2009 New York Prize Fellowship from the Van Alen Institute, a 2010 EDRA/Metropolis Great Places Research Award, and a 2013 New York State Council on the Arts grant.