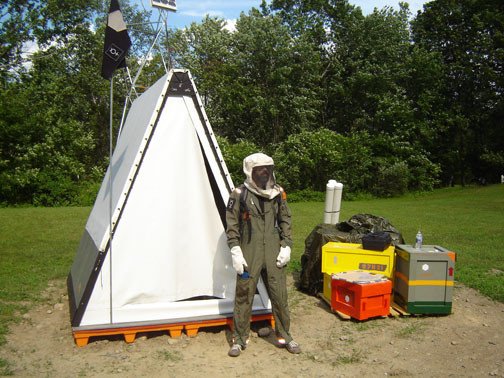 "Bivouac: an exhibition including a small outpost of skilled improvisational designers and essentialist bricoleurs; expeditionary artists whose works often approximate dwellings. Their sheltering forms are the trace of a civilization of dignified survivalists, poetical pragmatists and networked autonomists. A reflection in the back of a campfire tin shows a compulsion to construct from the bones of a failed utopia. In circumstances where capacities to adjust to destabilized conditions are inadequate, one must pursue, with urgency, new models for survival. Neither primitive hut, nor decorated shed, these artworks serve as prototypical responses to aggravated social conditions, and as vigorous symbolic admonitions illuminating the darkness of cultural eclipse." - Max Golfarb, organizer.

John Osorio-Buck is his own subject of social experimentation. Endurance, isolation, and outlaw activities are not mere affectations, but byproducts of the ingenuity of an artist that considers resourceful survival through the lens of a utopic inventor/designer. He applies his structures to performative implementation: His work implies the romantic narrative of 'the last inhabitant', while demonstrating practical solutions to extreme social conditions such as urban homelessness and displacement. Here he will present work from Utopia 7: Drop and Deploy, a set of aerial transported relief containers.

Mary Mattingly, informed by singularity theory, and visionary architectural propositions, has returned from her invented neo-medieval future of corporate monarchs and ecological devastation to file a report on how to prepare oneself for a landscape populated by clannish nomads: Wear your home, pack lightly. - Consider her cosmology as a map for applying expansive mystic insights to the survival of the everyday. Encountered in the fields of Art Omi, the downed crash materialized from Mattingly's world is a beginning stemming from the end.

Sometime collaborators, Garrett Ricciardi & Ross Cisneros, will reveal the ruined remains of a roller coaster, evoking a deflated collapse of cultural revelry. At the intersection of folly and doom, the structure sits in its incongruous pastoral surroundings as an ossified remnant of a bygone civilization: ours.

Elinor Whidden has dismantled a junked car, and transformed the carnage into a series of journeyman gear. Like a Pilgrim wading through the earth's entropic return, where a car is a dormant pile of materials to pick through, she manipulates the dead car body into a series of useful vehicles: canoe, sled, carrying pack; she embarks on perambulatory travel. If Lewis and Clarke were dependent upon John Carpenter as their native guide through the skeletal remains of a future-past, they might encounter Whidden's adapted paraphernalia. Whidden and her crew of frontiersmen have circumnavigated Niagara Falls in a group portage using her recycled vehicle-gear.

Jose Krapp makes assemblages that appear to be the result of sculptural triage. His sympathies ally him with hasty and misbegotten materials that have been grafted into tenuous, momentary building anatomies. Krapp's bivouac seems to be the lookout tower of the Lord of the Flies erected by a mismanaged branch of the Federal Emergency Management Agency.

The collaborative team of Kahn/Selesnick weave their work into elaborately scripted narratives of parallel, forgotten, potential histories; fictional heroes aspiring expeditious alternatives to the encroachment of menacing empire builders. The romantic trans-continental, and sometime interplanetary voyaging of their various mythic narratives joins the pathos of lost possibility with the enchanting optimism of future innovation and discovery.

Allison Wiese's investigations subtly undermine the barrier walls of authority, and resurface in the midst of the surprising activities found in the outer margins. Her clandestine distillery, composed of off-the-shelf parts from a home-improvement center, evokes a redneck detournement. Her wild-card application of materials redirects the resourcefulness of a suicide bomber towards a slightly dangerous and illicit form of entrepreneurial leisure.

Marie Lorenz is an experimental navigator and alternative tour guide eschewing the economies dictated by adherence to Greenwich Mean Time. Her work betrays an interest in piracy, beat aimlessness, slow conveyance and theatrical anarchy, conjured as a resistant force against an alienating culture. In her Beaver Lodge project, she advances the industrious engineering of the beaver: in this outsider hideaway, she postulates a reversal of nihilistic vogue, where mankind will inhabit forms appropriated from nature.

Matthew Lusk clusters together a tent annex; temporary living quarters that draw form from the darker reaches of minimalist sculptural constructions. He inserts uneasiness into the crevasses of this material investigation, catalyzing surprising conceptual synapses. His campground of artifacts and invisible specters has been mysteriously abandoned by the inhabitants: evidence of conditions to be avoided.

Charles Goldman will cobble together salvaged parts to form hive-like structures that hover between organic and synthetic architectural form; appearing like a snaggletooth geodesic building practice. The sculpture seems to speak about architectonic systems that begin unpredictably, but then find an ordering procedure for infinite expandability, conforming organically to conditions of the site.

Michael Cataldi, sometime contributor to the Center for Urban Pedagogy, typically rearranges the scraps deposited in the interstices of cityspace, to build a playful model shelter. He gathers materials discarded in urban areas into a pavilion: a private gathering zone for public assembly. If Louis Kahn famously asked what a brick 'wants to be' to imply the sensitive relationship of surface and structure to the scale of the individual, perhaps Cataldi asks this considerate question of any piece of cast-off rubbish that he finds in abundance: Through found detritus, he envisions possibilities for constructing room-like shanty-spaces to inhabit as a dreamy respite. To a poet/scavenger, maybe an oddly shaped piece of flotsam 'wants' to seek the humble grandeur of participating in the sheltering of an individual. It is a mode of reuse applied towards one's attempt to endure the degradation of a wastefully unstoppable machine. At Omi, Cataldi's cave-like refuge is embedded into the land as if returning dwellers to their 'first architecture'.