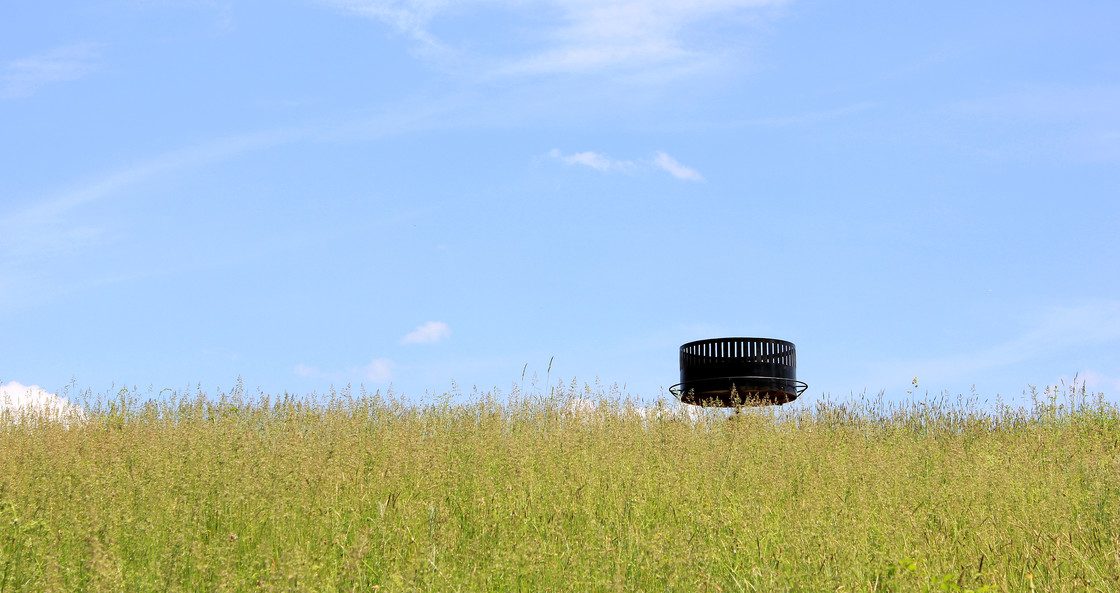 Freya Powell's Active Turn is a fully functioning steel zoetrope, operating to create the illusion of motion by spinning a successive set of still images.

For the zoetrope's exhibition at Art Omi, Powell will create a site-specific reel that includes imagery of a galloping horse in different stages of motion among our rolling landscape of The Fields Sculpture Park. This subject matter reflects back to the history of photographic animation, reminiscent of photographer Eadweard Muybridge's classic work The Horse in Motion. In a more localized and personal context, this image reel assists in disclosing the rich equestrian and farming history of Omi, as well as offering a reflection from a period Powell's childhood she spent living in Ghent.

The horizon as seen around the zoetrope is paramount to the artists' vision in combining sensory illusions with physical reality. The work provides the viewer with two scenes to comprehend, one "real" and one perceived. This provides an important contemplation, once again allowing the viewer to consider the past reality of their current surroundings.

A series of collaborations throughout the instilation will invite artists selected by Freya Powell and Omi's curator to create new works for use in zoetrope:
July 28, 2016: Collaboration with Camp Omi
October 8, 2016: Kahn + Selesnick
Spring 2017: David Horvitz

Freya Powell was born in London, England and is currently based in Queens, New York. Powell's work has been exhibited nationally and internationally at venues including the #1 Cartagena, the First International Biennial of Cartagena des Indias, Colombia; Bronx Museum (NY); Socrates Sculpture Park (NY); Emerson Dorsch (FL); Arts Santa Monica, (Barcelona, Spain) among other venues. She has participated in artist residencies at Socrates Sculpture Park, Vermont Studio Center, Post-Contemporary, and the AIM program of the Bronx Museum. Powell received a William T. Graf Travel grant in 2011. She holds an MFA from the Hunter College (2012) and a BA in Studio Arts from Bard College (2006). Powell teaches at the Cooper Union and Queensborough Community College.