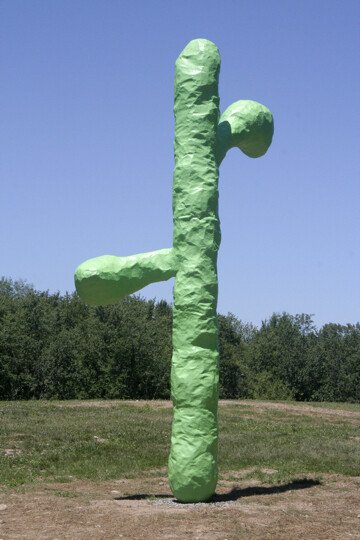 Franz West was born in Vienna in 1947. He began consolidating his particular style during the 1960s. His earliest works were collages and small sculptures made from papier-mâché. These early sculptural works ('Adaptives' or Paßstücke) were meant to be portable, and interacted with by the viewer. It is believed that West might have made these works in response to Actionism, an Austrian art movement that wanted to introduce more dynamism into the art-world through public displays of physicality. By the 1980s, West's sculptures had grown in scale and were made in more permanent materials such as polyester and aluminum, to construct installations of seating and lounges that were to be used by the viewer. Through these works, West further explores the relationship between art and everyday life and challenges traditional notions of the experience of the art object.

Franz West has exhibited extensively throughout the United States and Europe. Recent solo exhibitions of his work have been held in institutions such as the Baltimore Museum of Art in 2008 and the MUMOK in Vienna and The State Hermitage Museum in St. Petersburg in 2007. He has also participated in exhibitions in major institutions such as the Museum of Modern Art in New York, the Museo Nacional de Arte Reina Sofía in Madrid, and the National Museum in Oslo. West has also participated in several Venice Biennials and his work has been featured in multiple publications. Franz West lived and worked in Vienna until his passing in 2012.