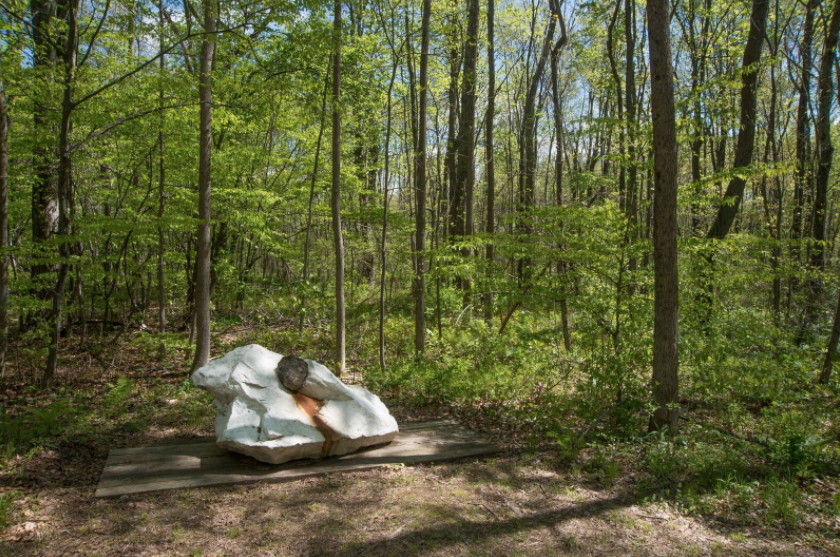 Dove Bradshaw’s series of Indeterminacy Stones continues her investigation into environmentally reactive works. Indeterminacy IV consists of a pyrite rock set atop a piece of white marble, installed outdoors in order to weather. The pyrite transforms into limonite when exposed to the elements, creating a permanent iron rust stain as it bleeds onto the white marble rock below. Indeterminacy IV will continue to evolve and change with time, the art work essentially creating itself.

The title also pays homage to the work of American artist and composer John Cage, a pioneer in works involving an element of chance. Cage sought “to let things be themselves,” just as Bradshaw does with her stones. Cage was also deeply influenced by traditional Japanese rock and sand gardens and the seemingly random placement of the stones in these spaces.

In 1975 Dove Bradshaw was awarded a National Endowment for the Arts grant; 1985 the Pollock-Krasner award; 2003 a Furthermore Grant; in 2006 The National Science Foundation for Artists Grant. Her work has been shown regularly in the US, Europe, Korea and Japan, appearing in the 6th Gwangju Biennale, South Korea. She is represented in the permanent collections of many major museums including the Metropolitan Museum of Art, Museum of Modern Art, New York, The National Gallery of Washington, The Art Institute of Chicago, The British Museum, Centre Pompidou, Paris, and Marble Palace, Russian State Museum, St. Petersburg.