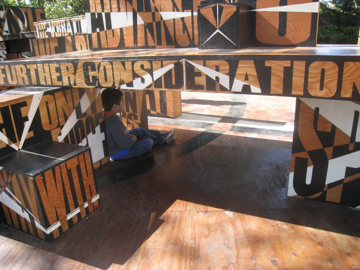 The presentation of Icarus Meets Apollo, located at the Education Omi Pavilion, is aimed specifically for the children who visit The Fields Sculpture Park and attend Education Omi's Programs.

Previously on view at the Socrates Sculpture Park, Icarus Meets Apollo is a modernist pavilion constructed of interlocking plywood boxes with ledges and doorways in a child's scale. The structures invite children to experience the work by climbing on and through it. Bauer drew inspiration for the structure from the Apollo Pavilion in Durham, UK designed by the architect Victor Pasmore in 1969. On the surface of the pavilion's boxes appears bold graphic text elements taken from Shakespeare's The Tempest, Italo Calvino's Invisible Cities, Sun Ra's poetry and quotes from the urban planner Robert Moses and from the writer Jane Jacobs who wrote in opposition to Moses's work.

Diann Bauer is an artist whose work deploys a language of visual force across disciplines, including drawing, sculpture, painting, printmaking, installation, architecture and video. She studied art and architecture at Cooper Union and Goldsmiths College. Her work has been exhibited in institutions, art galleries and other non-traditional gathering places internationally since the 1990's, notably at Tate Britian, The Showroom and The Drawing Room (London), as well as Deste Foundation and Benaki Museum (Athens), Ian Potter Museum of Art (Australia), Kraupa-Tuskany Zeidler and Die Neue Aktionsgalerie (Berlin) and White Box, The Dorsky Museum, and Socrates Sculpture Park (New York). She was awarded a British Council Residency in Hanoi and one in New Delhi, and is an Elephant Trust and Arts Council England grants award recipient. Bauer has taught at several institutions including the Cooper Union and Cornell University AAP in New York, and Goldsmiths College and the University of the Arts in London. She is an organiser of Fixing the Future (fixingthefuture.info) through which she hosted the seminar, Plotting Politics with Ray Brassier, Nick Srnicek and Alex Williams and organised a panel at the Montreal Biennale Future Summit calledFixing the Future: The City with Keller Easterling, Marie-Pier Boucher and FtF collaborators Joshua Johnson and Keith Tilford. She is a member if Laboria Cubonics and who soon publish the collaborative text Xenofeminism, A Politics for Alienation.