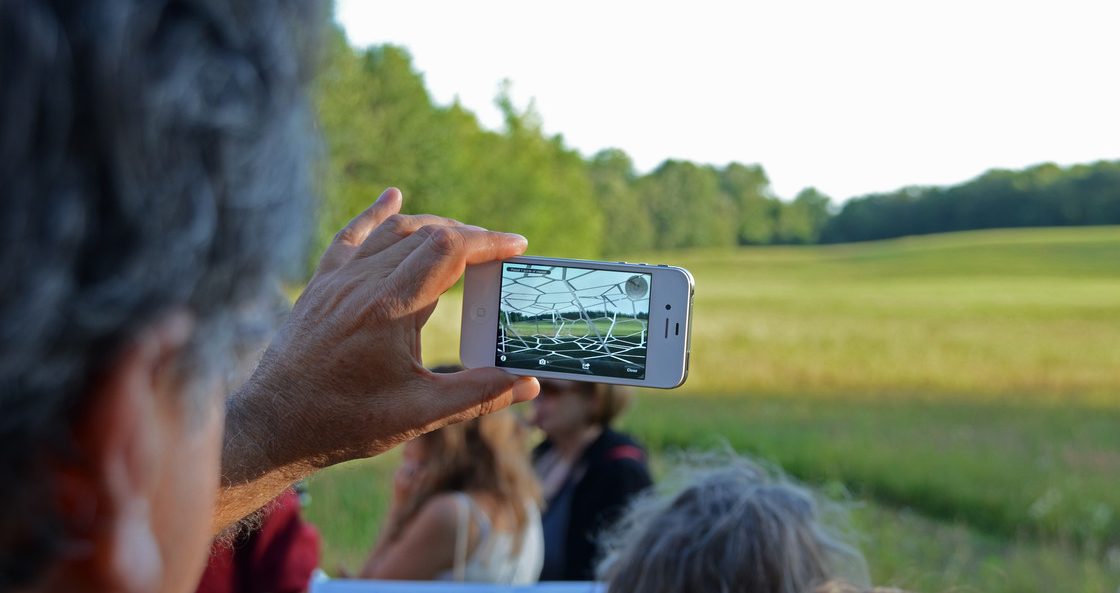 Augmented Reality offers a peek at the future of architecture and representation, but more generally, it marks a further integration of a novel technology to our everyday experience. Sim worlds and virtual reality have been plodding forward in niche corners of geekdom, but are limited by cumbersome and expensive gear. Augmented Reality is fundamentally more accessible. The simplicity and availability of the viewing medium (cell phones, free downloadable app) removes the process from the realm of rarefied and expensive devices and in the near future, special viewing glasses will become available, allowing us to seamlessly interact with digital flows, bridging the distance between our mind and data port. What we experience here is not fully virtual: what we see on our phone is what we see around us, eerily enhanced by the overlay of digital content.

We now step into the world of science fiction realized. Not that long ago, William Gibson in Sci fi and Donna Haraway in critical theory began positing the notion of the cybernetic organism, a biomorphic integration of the digital and physical. Neuromancer thrilled us with cyborgs, "jacked" into a meta-universe. The Matrix movies were lauded for their postulation of a digitally fabricated world consciously devoid of physical reality Now, talk of ubiquitous computing is emerging from academic speculation to public consumption. In short, data and the interconnectedness of technology is invading our physical and mental constructs." - Peter Franck, former Director of Art Omi: Architecture.

"In the recent past, many architects have dabbled in virtual reality, simulating augmented space using video projection technology and other media. Now, via developments in augmented reality, the general public can enter this virtual space and actively engage with the visions of mature experimental architects. The participants in Peeling Layers of Space: Out of Thin Air were selected in response to their visionary approach towards a new architecture that has changed the built and/or academic landscape. As I expected, every contribution to this exhibition is masterful in the ways it uses augmented reality to intervene with the tranquil landscape of Omi, superimposing exciting and unpredictable visions that will make an everlasting impression on its visitors. Thanks to these interventions, Omi is now the locus of an unprecedented fourth dimension of fierce force that will continue to expand our understanding of space and time in the 21st century." - John Cleater, Curator

Acconci Studio was formed in 1988. Their work is a mix of poetry & geometry, computer-scripting & sentence-structure, narrative & biology, chemistry & social-sciences. They make places fluid, changeable, portable. Acconci Studio anticipates cities on the move. Current projects include a mediation park in an archeological site near Eindhoven; on a portable retractable roof in Luzerne, and toilets in the trees in Gwangju.

Asymptote Architecture is an internationally renowned practice working at the forefront of technological innovation in the fields of architecture, design and are. Founded by Hani Rashid and Lise Anne Couture in New York City, they have garnered praise for visionary building designs, mater plans, art installations, exhibition, object design and digital environments.

Educated and trained as an architect, John Cleater worked with Asymptote, off and on, from 1989-2003. Cleater was introduced to Augmented Reality in the fall of 2010 by the cyber artist group, Manifes. AR, and he is now a member. His AR work has been included in group exhibitions with them at ICA Boston, Venice Bienalle 2011, Devotion Gallery,NY, Kasa Gallery in Istanbul, Turkey, and others. Cleater is also a founding member of the internationally acclaimed multi-media theater company, The Builders Association, and is currently designing the set of House/Divided that will premiere in the 2012 Next Wave Festival at BAM in New York.

Sulan Kolatan and William MacDonald are Principal and Director respectively of KOL/MAC LLC, an Architecture firm international recognized for its advanced digital designs. The work of KOL/MAC has received numerous awards and honors. It is included in the permanent collections of MoMA, Centre Georges Pompidou and others.

Leeser Architecture's designs emerge from cultural, social and technological patterns present at the site. The firm's projects use technology to reframe the understanding of architectural conventions and production, creating powerful environments in the process. By shaping and refocusing the conventional awareness of these forces we create complex and richly varied spatial experiences, new programmatic relationships and beautifully simple organizations.

Daniel Libeskind B.Arch. M.A. BDA AIA, is an international architect and designer. His practice extends worldwide from museums and concert halls to convention centers, universities, hotels, shopping centers, and residential projects. Libeskin has received numerous awards and designed world-renowned projects including: the Jewish Museum in Berlin, the Denver Art Museum, the Royal Ontario Museum in Toronto and the master plan for Grand Zero among others. Daniel Libeskind's commitment to expanding the scope of architecture reflects his profound interest and involvement in philosophy, art, literature and music.

SHoP was founded in 1996. The practice has grown to an office of eighty. The firm's educational and professional experience encompasses architecture, fine arts, structural engineering, finance, software and business management, including many project types, from multi-story housing to academic buildings to master plans. SHoP's work has won numerous awards, has been published and exhibited internationally, and is in the permanent collections of the Museum of Modern Art.

SITE is known for the recent social Shake Shack phenomenon. Our lives are in constant motion.