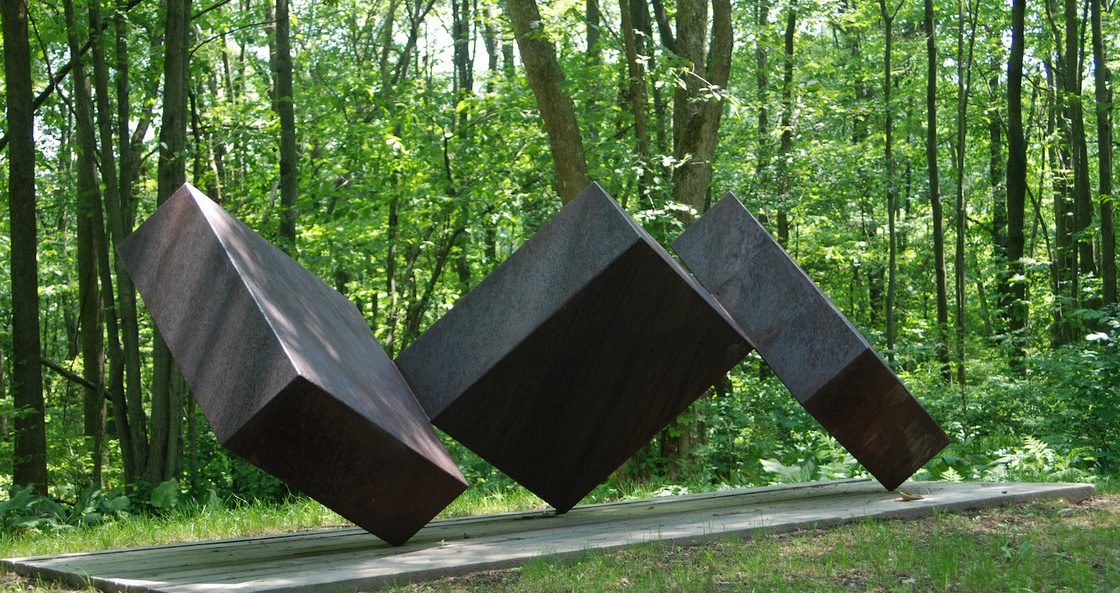 Steppe, 1969 Brushed steel on wooden base

Antoni Milkowski was an American minimalist sculptor. His works are often in massive scale, and Steppe is an example of his earlier works of brushed, untreated steel on a slightly smaller scale. The action of brushing the surface of the steel acted much like a painterly brush stroke, conveying his style and artist's hand onto this large metal work. Milkowski's sculptures were either left with bare steel surface exposed or a dark coat of paint, which is relative to Milkowski's wish for his work to both complement and contrast its' natural surroundings. The three rectangular cubes are balanced in an almost impossible way, making this heavy steel plated form almost seem to weigh nothing. This weightless illusion, along with the physical illusion of shifting form and space as one moves around the sculpture, were just a few of Milkowski's profound and historical principles as a sculptor. The relationship between the manmade, cold, heavy material tends to contrast with the lushness of the landscape, which is what Milkowski often sought for in his large scale sculptures.

Milkowsi retired from Hunter College, where he taught from 1966 to 1998. He lived and continued creating art in East Chatham, New York, and died sometime after 2001. Milkowski has exhibited in institutions and galleries throughout the world, such as Kunsthaus Zurich, the Museum of Modern Art, and the Hudson River Museum and many more. Milkowski's works can be found in the collections of the Museum of Art in New Orleans, the City of New York, the Hofstra University Museum and the American Embassy in Warsaw, Poland.