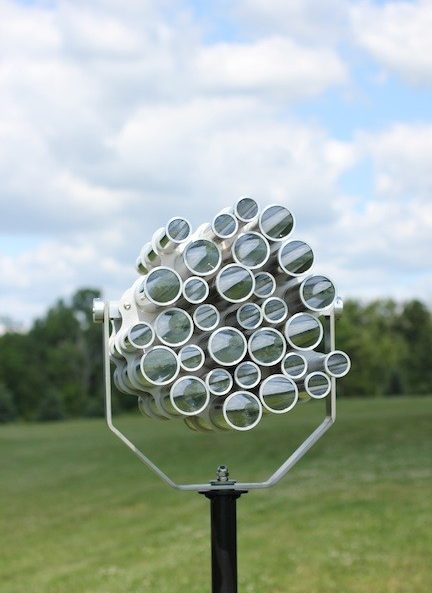 Alyson Shotz is a contemporary American artist who sculpts using a multitude of synthetic materials to create almost otherworldly effects. Her works reflect on issues and ideas related to astronomy and physics, and often constructs in "multiples", combining several objects in a repetitious manner to create forms that fit into a larger context. These amalgamations often reflect the images of natural forms and phenomena with the accumulation of simple materials such as mirror, glass beads, plastic lenses, thread and steel wire. In her work, Shotz reflects and responds to the visualization and creation of complicated concepts such as that of theoretical physics, astronomy and the expansive nature of the universe. Shotz's works are ephemeral and deal with issues of temporality; the element of light is an important one, as the sculptures change with the time of day and the angle of light that comes through them.

Shotz received her BFA in 1987 from the Rhode Island School of Design, and subsequently received her MFA at the University of Washington in Seattle. She has shown in a multitude of solo and group exhibitions widely throughout the world at institutions including the Nasher Sculpture Center (Dallas, TX), Derek Eller Gallery (New York, NY), Aldrich Museum of Contemporary Art (Ridgefield, CT), Tspace (New York, NY), ArtBasel (Miami, FL), Market City Public Art Program (India), The Grand Palais (Paris, France), and many more. She also has an upcoming exhibition at Millesgården Museum (Stockholm, Sweden) in 2016.