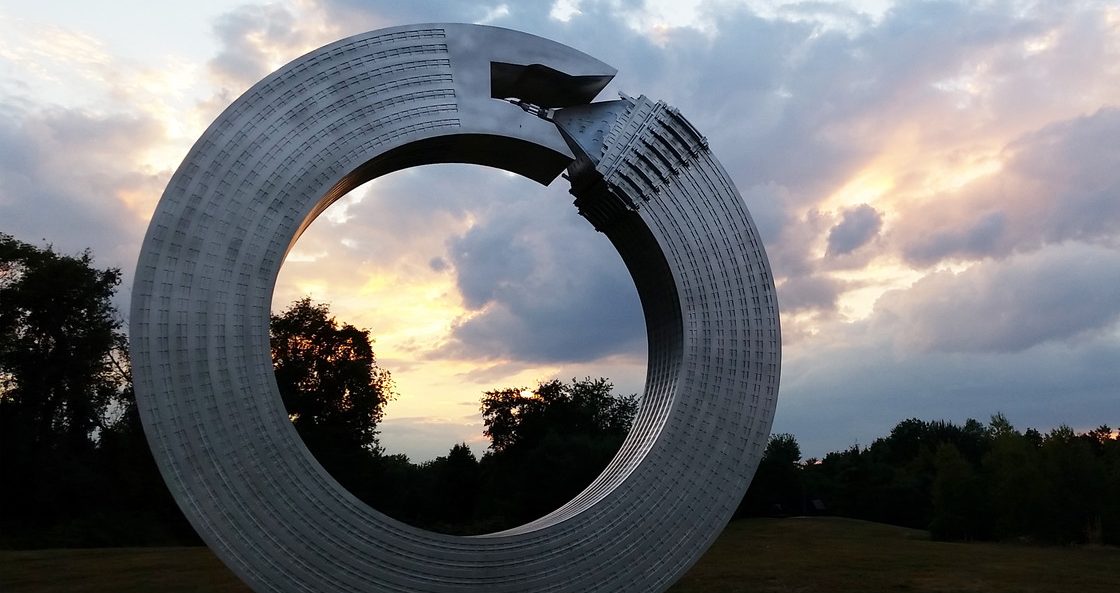 Helmsley by Alexandre Arrechea comes from No Limits, a public art exhibition. The series of steel sculptures were on view in Summer 2013 along the Park Avenue Median in New York City. Arrechea playfully reinterprets buildings that defined the city and Park Avenue and each piece in that exhibition was based loosely on a New York architectural landmark: in this case, the Helmsley Building on Park Avenue and East 45th Street.

The 15-foot sculpture pays homage to the 35-story building but is equally recognizable as a snake eating its own tail. The Cuban artist has spoken of the Ouroboros myth: "It's like a city that devours itself. That has always been my first vision of New York."

"It's kind of creating my vision of a parallel city by bending the rules," Mr. Arrechea said. "These buildings are a like new calligraphy that creates a link between architecture and the human condition, and the idea of failure and success. I wanted to make the statement that we have the ability to transform our surroundings."

No Limits was presented by Magnan Metz Gallery, in conjunction with New York City's Department of Parks and Recreation and The Fund for the Park Avenue Sculpture Committee. Helmsley appears courtesy of Magnan Metz Gallery, where Arrechea is represented. Arrecheas work was previously exhibited in Skyline Adrift: Cuban Art and Architecture, curated by Rachel Perera Weingeist, Peter Frank, and Ricardo Porro.

Alexandre Arrechea graduated from the Instituto Superior de Arte (ISA) in Havana in 1994 and was a founding member of the collective Los Carpinteros (1994-2003). The interdisciplinary quality of Arrechea's work reveals a profound interest in the exploration of both public and domestic spaces. Most recently this quest has led him to produce several monumental projects like NOLIMITS (2013) encompassing ten monumental sculptures installed along the Park Avenue Malls. Among his solo shows are Twisted Horizon at Magnan Metz Gallery, New York (2012), Espacio Derrotado at Casado-SantaPau Gallery, Madrid (2011), Black Sun, which was on the NASDAQ Billboard in New York (2010), The Rules of Play, Savannah College of Art and Design, Georgia (2010), and Orange Tree at the Bronx Museum, New York (2011). The artists work can be found in the permanent collections of the Brooklyn Museum in New York, CAB Burgos, Spain, Museum of Latin American Art, California, the Museum of Contemporary Art in Los Angeles, Daros Collection, Switzerland and the Museo Centro de Arte Contemporáneo Reina Sofia in Madrid.