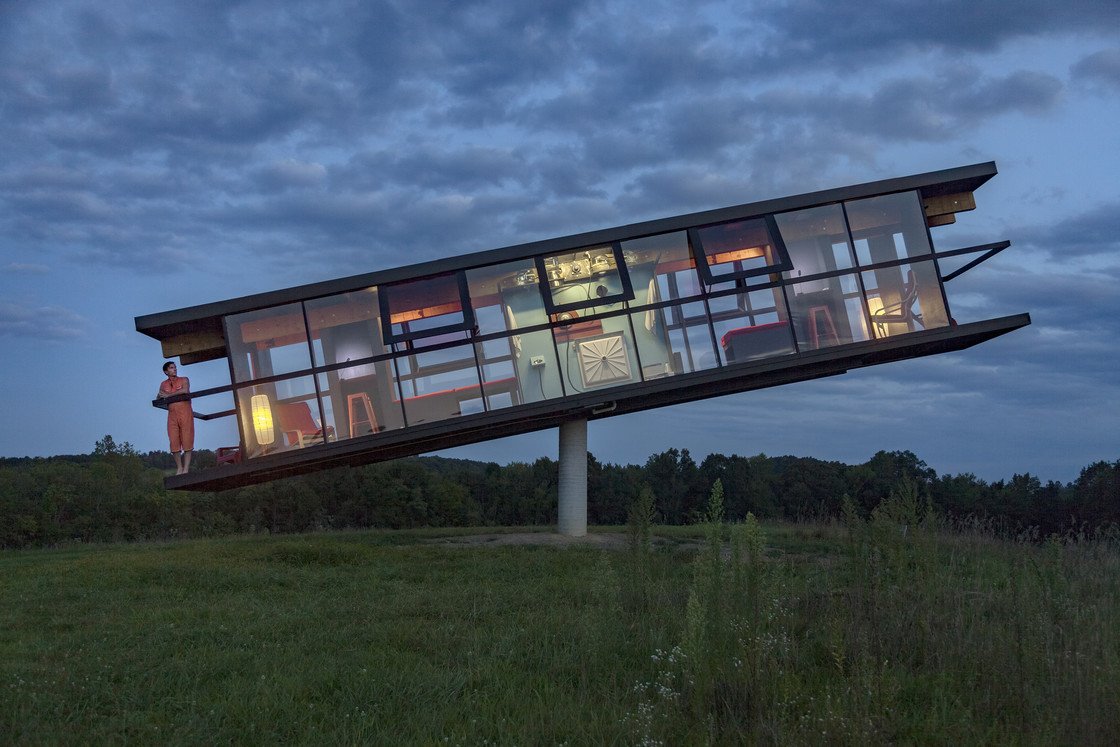 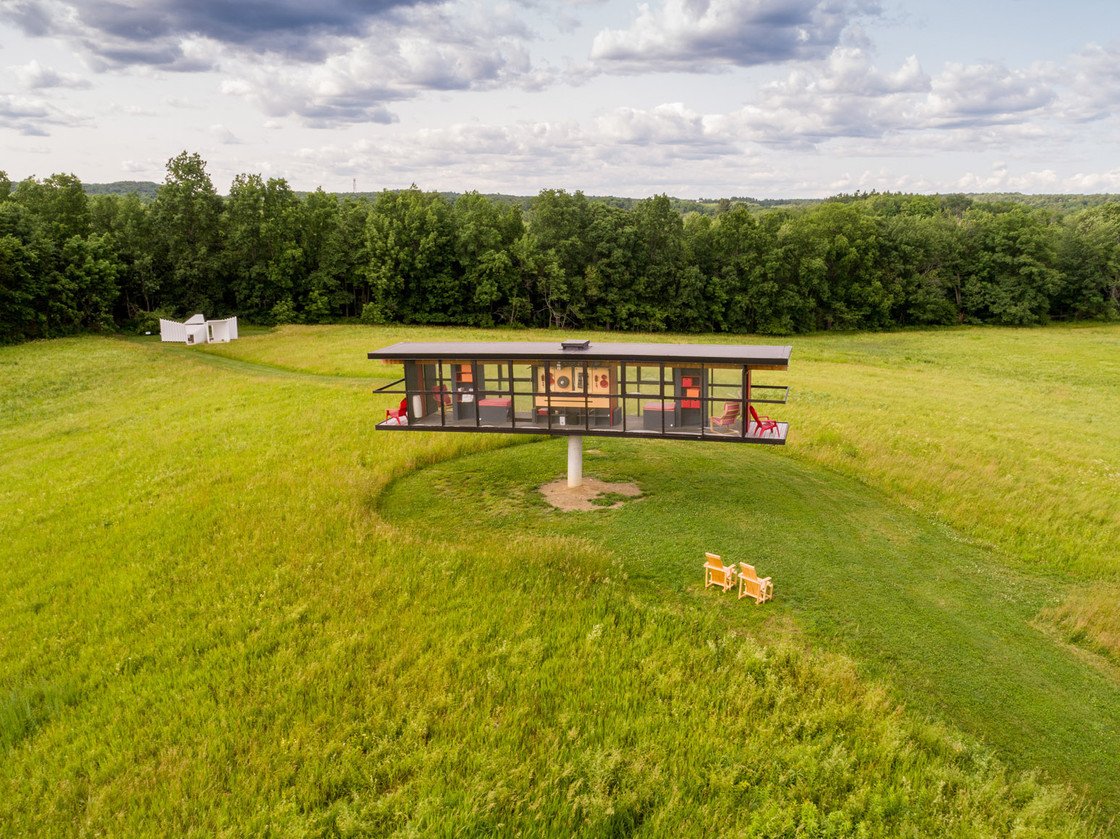 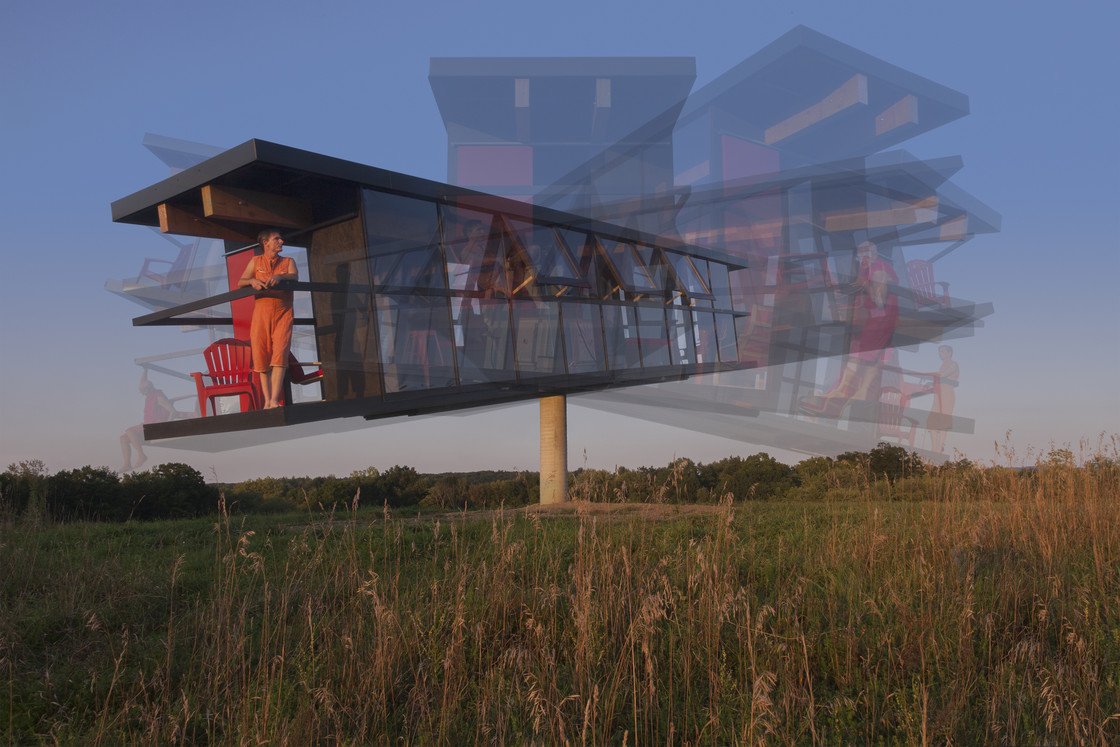 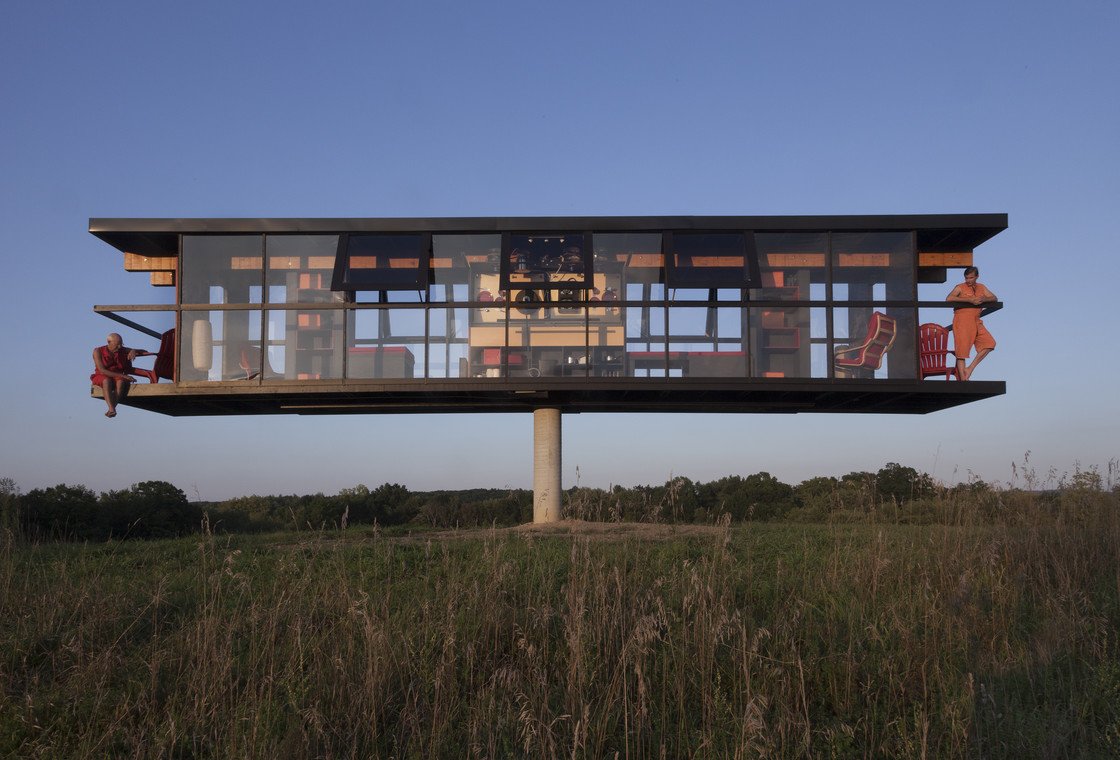 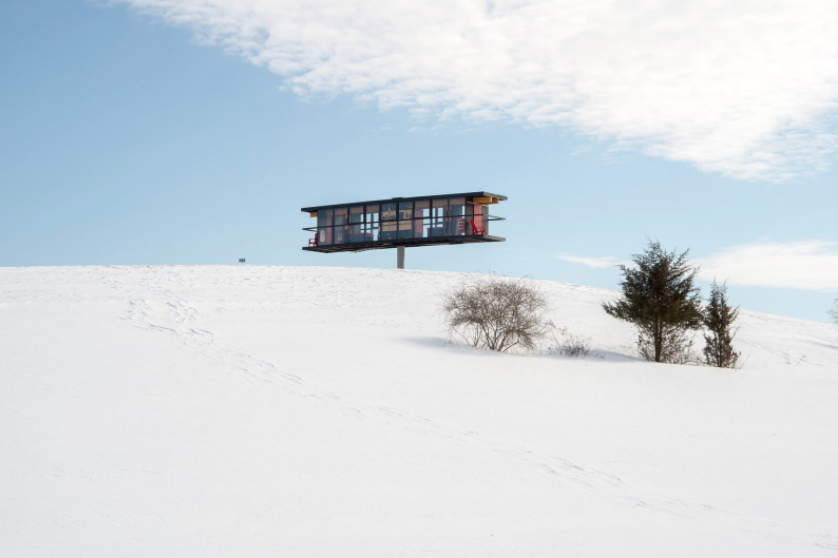 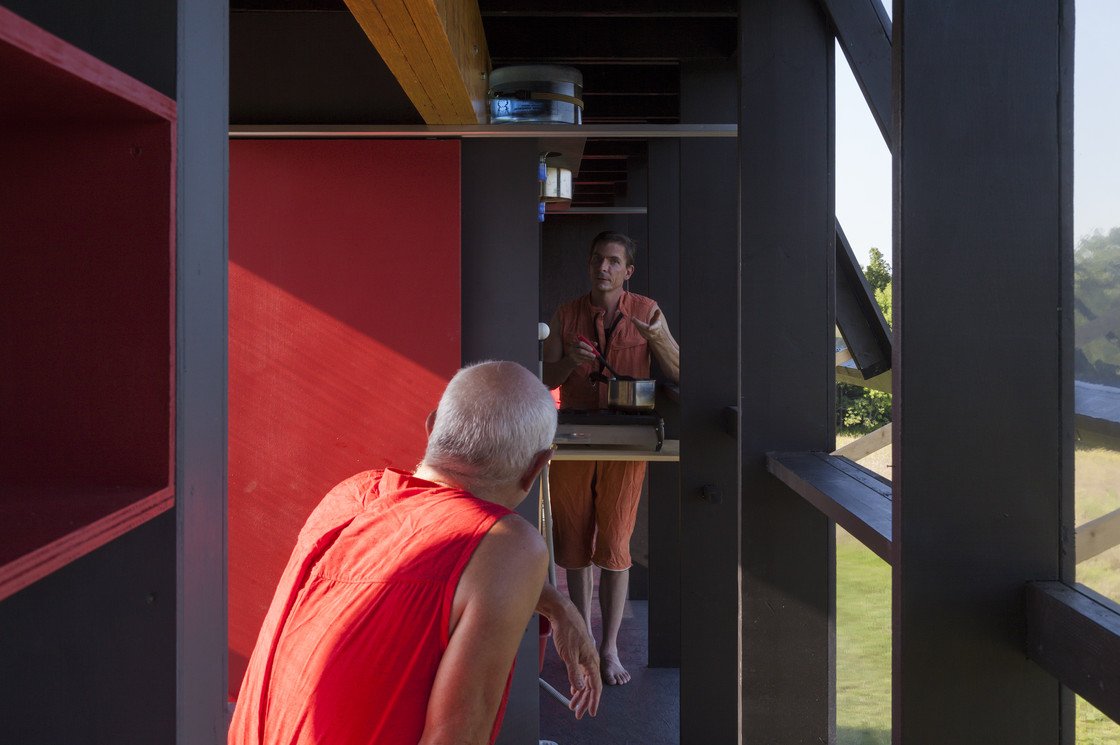 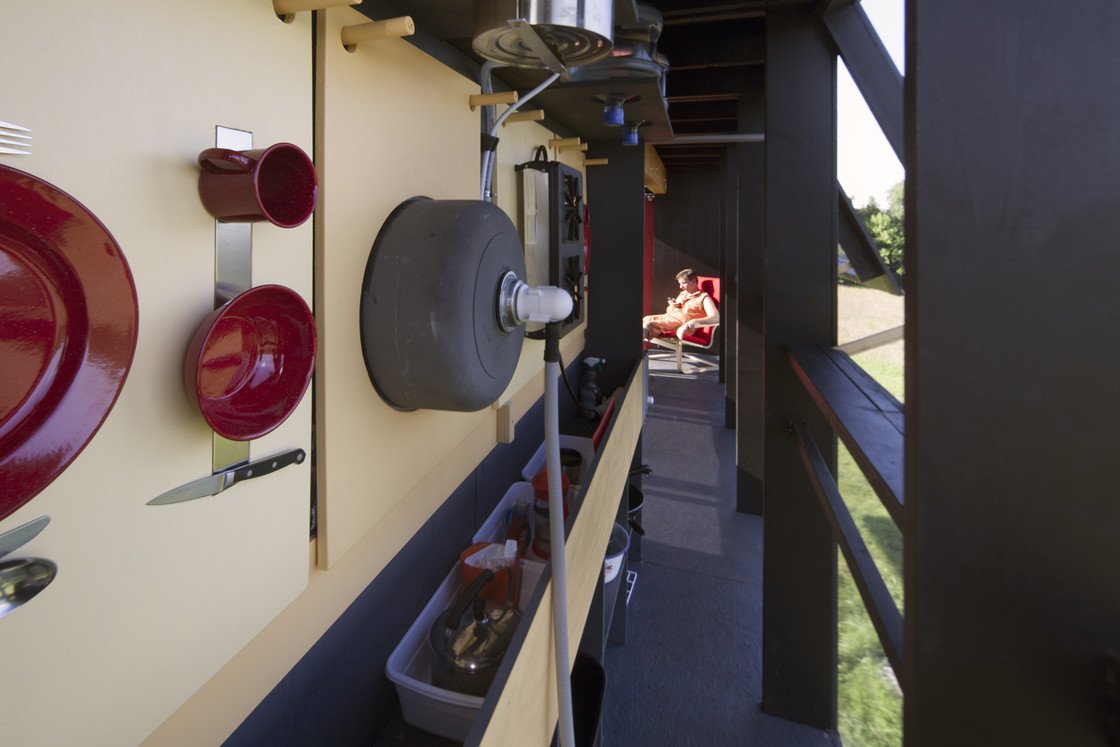 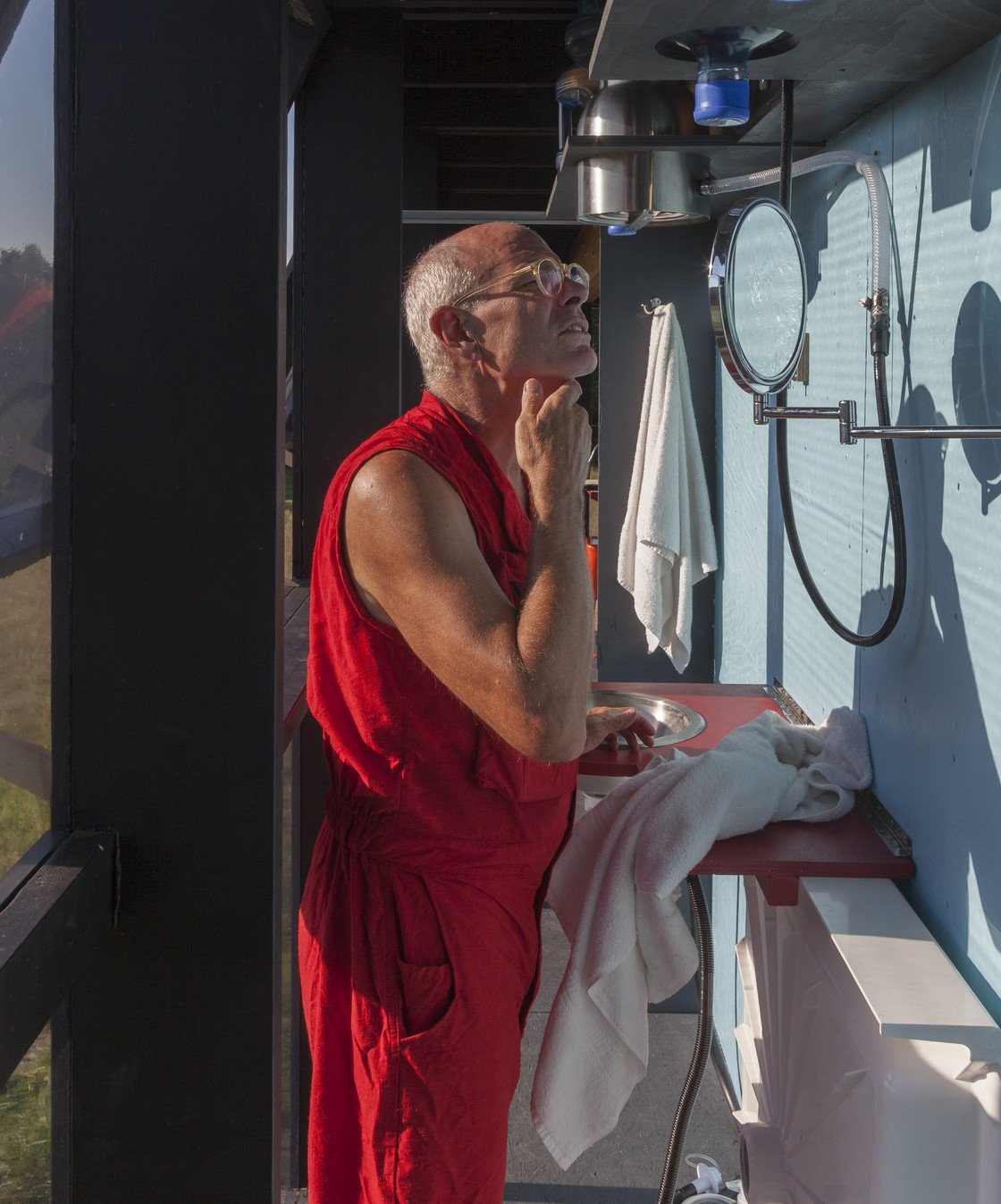 Located in Architecture Field 01, ReActor is a habitable sculpture, where Schweder + Shelley periodically live in full view of Art Omi's audience. The 44-foot by 8-foot structure rotates 360-degrees atop a 15-foot concrete column in response to its inhabitants' movements, exterior forces, and interior conditions, making visible the intimate relationship between architecture and its inhabitants.

ReActor is part of the 2016-17 Art Omi: Architecture exhibition WOOD: From Structure to Enclosure.

About Schweder + Shelley
Alex Schweder and Ward Shelly met while fellows at the American Academy in Rome in 2005. They first collaborated on Flatland at the Sculpture Center in 2007, a piece that focused their interests toward performative social architecture. The duo went on to produce Stability in for Lawrimore Project, Seattle (2009); In Orbit, at Pierogi Gallery's Boiler Room (2014), and Counterweight Roommate at SCOPE, Basel, Switzerland (2011), recently acquired by The Museum of Modern Art for its permanent collection. ReActor is their first outdoor piece, and it further explores how constructed environments affect relationship dynamics, and how relationships impact the constructed environment.

About Alex Schweder
Alex Schweder works with architecture and performance art to complicate the distinction between occupying subjects and occupied objects. These projects include Practise Architecture at Tate Britain, Flatland at New York's Sculpture Center, Its Form Follows Your Performance at Berlin's Magnus Muller, A Sac of Rooms All Day Long at the San Francisco Museum of Modern Art, Counterweight Roommate in Scope Basel, Roomograph at the deCordova Museum, and The Rise and fall in the Marrakech Biennial. The Pollack Krasner and Graham Foundations have funded his projects. Schweder is the author of Stalls Between Walls included in Ladies and Gents, the Gendering of Public Toilets and Performance Architecture included in Urban Interiors. He is a three-time artist in residence at the Kohler Company and was in residence at the Chinati Foundation and American Academy in Rome. Schweder has been a guest professor at the Southern California Institute of Architecture, Pratt Institute, and the Institute for Art and Architecture in Vienna.

About Ward Shelley
Ward Shelley works as an artist in Brooklyn, New York. The artist earned his Masters degree from NYU and has been working and showing in New York since then. Shelley's work includes timelines of art-related subjects such as the careers of artists working in de-materialized media and the history of art scenes. Shelley's work has been recognized in numerous publications including Bomb Magazine, The New York TImes, Village Voice, Artforum, Hyperallergic, Art in America, The Brooklyn Rail and more. Shelley has exhibited in more than 10 countries. In 2004 Shelley lived and worked inside the walls of Pierogi Gallery for 5 weeks for an exhibition called We have mice. Ward Shelley's work is in a number of museum collections including the Museum of Modern Art, the Brooklyn Art Museum, and The Elizabeth A. Sackler Center for Feminist Art. Last year Shelley received a painting and Sculpture award from the Joan Mitchell foundation, and has been a fellow of the American Academy in Rome since 2006. He has received NYFA and NEA fellowships in sculpture and new media categories, a Bessie Award for installation art, as well as private foundation grants from the Jerome Foundation and the Pollock-Krasner Foundation. He is represented by Pierogi Gallery in Brooklyn, New York.

ReActor was discussed in depth during Curatorial Conversations: Relational Aesthetics in Art and Architecture on May 29, 2020. Watch the video archive here: