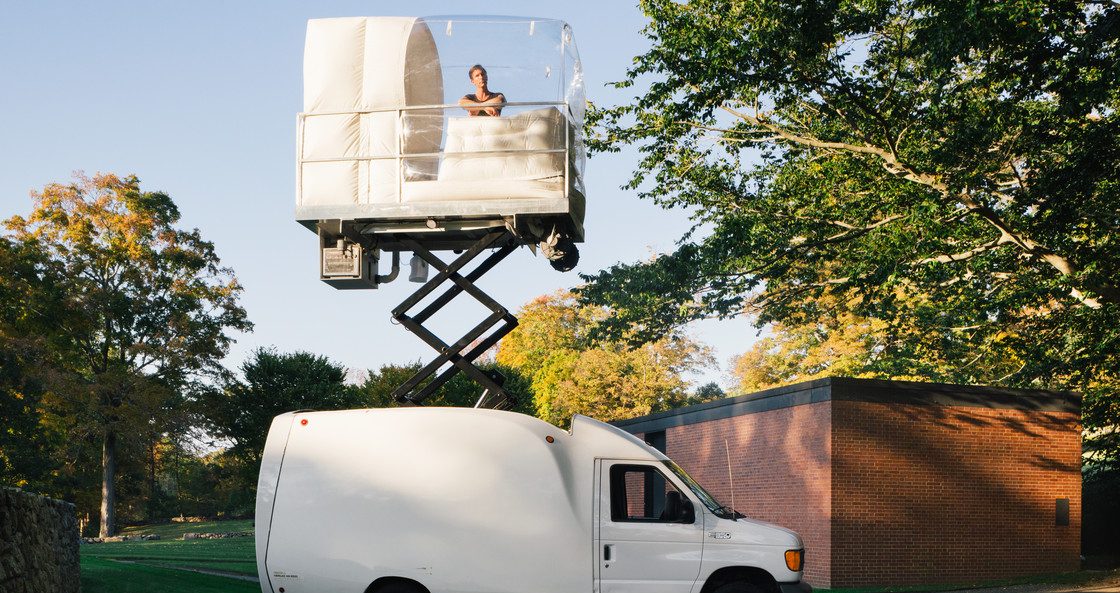 Alex Schweder describes the hotel rehearsal as "the only hotel that travels vertically and horizontally at the same time. Its habitable area measures only 5-feet-by-10-feet, but visitors never feel confined when they take in the panoramic view from this transparent inflatable structure, especially when raised to its full height of 30 feet. Residents can change what they see from their window by either raising and lowering the vinyl shelter or driving to another area. It is equipped with a chemical toilet, shower, sink, bed, couch, and curtains."

This project was originally developed for the 2013 Biennial of the Americas in Denver where Schweder was tasked with reinventing downtown surface parking. After Schweder learned developers want to turn several Denver parking lots into hotels, he created The Hotel Rehearsal as a foreshadowing of how the space could change. The hotel has since been driven across the country and stayed at various parking lots, existing only for a night or two. After its "rehearsals" in Denver, New Canaan, and Miami, Omi is thrilled to have the hotel travel to Art Omi, where guests can explore Schweder's eclectic expression of subversive space on the grounds of Architecture Omi.

Much of Alex Schweder's work centers on the performance of architecture, focusing not so much on a structure but the actions within it. In his own words, he is interested in "complicating the distinction between occupying subjects and occupied objects." Schweder's work is exhibited internationally including the Antarctic Pavilion at the 2014 Venice Biennale, Wall to Wall Floor to Ceiling at the Tel Aviv Museum of Art, In Orbit at the Boiler in Williamsburg, Slowly Ceiling at the 2013 Lisbon Architecture Triennial, Performance Architecture at the 2013 Moscow Biennial, Practise Architecture at Tate Britain, Flatland at New York's Sculpture Center, Its Form Follows Your Performance at Berlin's Magnus Muller, A Sac of Rooms All Day Long at the San Francisco Museum of Modern Art, Counterweight Roommate in Scope Basel, Roomograph at the deCordova Museum, and The Rise and fall in the Marrakech Biennial. The Pollack Krasner and Graham Foundations have funded his projects. He is a three-time artist in residence at the Kohler Company and was in residence at the Chinati Foundation, and a Fellow of American Academy in Rome. Schweder has been a guest professor at the Southern California Institute of Architecture, Pratt Institute, the Institute for Art and Architecture in Vienna, and the Architectural Association in London.